The Fed cuts rates again amid low inflation. What’s keeping it down?


The reasons, which are partly structural and partly cyclical, will likely keep interest rates low and the Fed in an accommodative mood for a while.


Major central banks worry that these factors could have a sustained disinflationary impact, especially on developed economies. As a result, they are willing to continue to experiment with unconventional monetary policy. The Fed isn’t the only major central bank taking early action. The European Central Bank also cut its deposit rate to a record low of –0.5 in September and announced plans to restart quantitative easing (QE).


Low inflation is troubling to central bankers because if it dips too low an economy could fall into deflation. As economic textbooks teach, the prospect that things will cost less tomorrow than they do today encourages people to delay buying. They are also less likely to borrow, as debt balances become harder to pay off over time amid deflation. If enough people cut spending and avoid credit, then businesses are less likely to hire and invest.


Whether central banks can bring inflation closer to target remains to be seen. Here are the five most significant factors keeping inflation down.


As companies modernize and become more efficient, they are able to reduce costs and pass on lower prices to consumers. Take Amazon’s acquisition of Whole Foods, for example. The first thing Amazon did was to cut prices on eggs, butter, cheese, milk and other products.


But technology also has an impact on more complex goods and services prices. The auto industry provides a clear example. Old internal combustion engine cars were made of steel, aluminum and other raw materials. As cars transition into computers that offer autonomous driving, the raw materials will be very different.


American consumers are behaving differently than they have during past economic expansions. They are saving more and spending less, a behavior that economists refer to as deleveraging. This is supported by the data: Household debt-to-GDP is at 76, down from almost 100 heading into the last recession.


To understand one way in which this influences inflation, consider housing — a major source of shelter costs. This component is the largest in the inflation basket. So if Americans aren’t increasingly borrowing to buy homes (and driving up prices in the process), then inflation will have a harder time gaining steam.


Core inflation — the measure that strips out the volatile food and energy components — has only been above the Fed’s 2% target for one sustained period over the past 25 years. And that was at the height of the housing bubble. 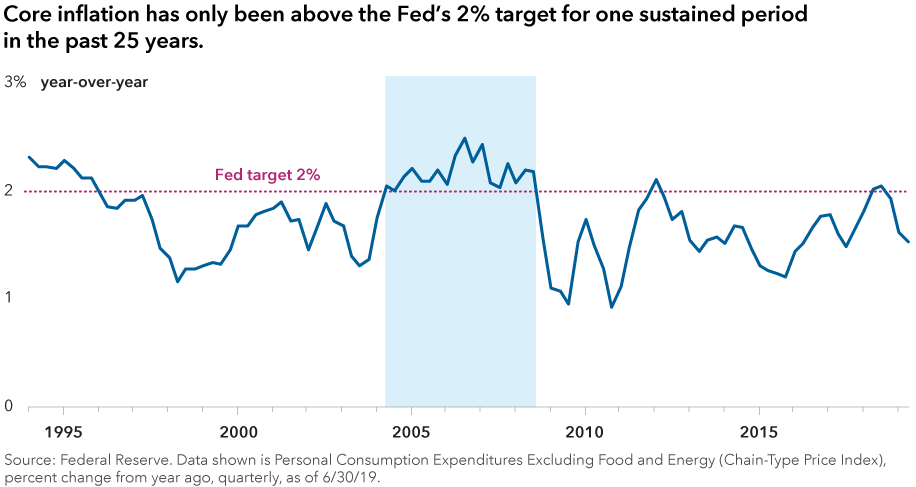 
3. Rising asset prices have not translated into much greater spending.


The Fed’s efforts to stimulate the economy through its asset-buying programs definitely impacted some prices: Equities and other financial asset prices have soared. This has disproportionately benefited wealthy consumers whose financial portfolios have improved but hasn’t resulted in much additional spending since higher income consumers save much of their income.


QE had a more muted impact on middle class and less affluent groups. They are more likely to spend when they feel they’re in a better place economically. Perhaps if their wallets had felt more of a jolt from the stimulus, they would have spent more, but QE was slow and incremental. If the Fed restarts its program in the future, it may aim for a more “big bang” impact.


4. China’s economic slowdown has dampened demand for metals and commodities.


When China joined the World Trade organization in 2001, it kicked off a robust economic expansion. This led the nation to become the dominant global driver of commodities and industrial prices.


Over the past several years, however, China’s growth has begun to slow from double-digit annualized rates to closer to 6%. At this point, a number of emerging and developed markets are linked to China’s economic success through trade. As demand weakens, industrial and commodity prices will not rise as quickly. That should have an impact on its trade partners, keeping its exports cheaper and providing less of a tailwind to inflation. 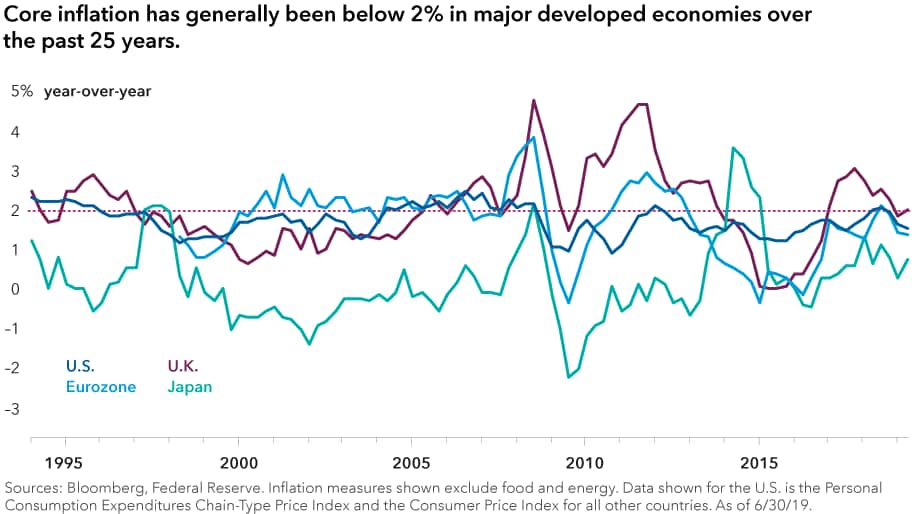 
The influence of China and other emerging markets has been felt by inflation in another way. These rapidly developing economies have been exporting workers to the global marketplace, depressing wage growth and stifling broader inflation.


A glut of global workers isn’t the only challenge. Unemployment generally dips to very low levels late in an economic cycle, which provides workers greater bargaining power and drives up wages. However, despite extremely low unemployment in the U.S. over the past few years, wage growth has been modest.


There are several reasons for this. Increased labor mobility no longer requires employers to pay new hires more when facing worker scarcity. Additionally, U.S. workers have less bargaining power than they once did when unions played a more prominent role.


In the eurozone, guilds, apprenticeships and other structural labor market features typically give workers more clout at the bargaining table with corporations. These features facilitate stronger wage growth, leading to more pass-through from labor markets to inflation. So even Germany, which is experiencing weaker growth than the U.S., has slightly higher inflation. These other economies have more of a structural inflationary system due to a sort of institutionalized wage growth.


Technology is also having a negative impact on wage growth. Innovations like robots and machine learning are increasing productivity and displacing workers. This trend will ramp up even more over the next 10 to 20 years, leaving workers with even less bargaining power. Employers won’t feel as much pressure to lift wages, and inflation will suffer.


Although the Fed and other central banks will continue to face challenges in their efforts to increase inflation, certain economic dynamics could be different in the future. For example, if consumers ramp up spending, monetary stimulus could have a greater impact. As could new policy. The Fed is exploring one option known as average inflation targeting. This strategy encourages consumer prices to drift higher for a period of time to compensate for their time below target. The goal is to hit a 2% average over a cycle.