Here’s a tip: TIPS have a place in a portfolio

Over the past six months, financial markets have experienced relatively large moves, and TIPS have been no exception. After President Trump’s election, the TIPS market re-priced10-year inflation expectations from 1.7% to about 2.1% early this year. But as concerns have grown about the new administration’s ability to navigate Congress, the TIPS market has tempered its view, with inflation expectations now closer to 1.85%. At these prices, we continue to like the TIPS asset class.


How will TIPS behave in different market environments?


First of all, it may be worth restating that TIPS are, indeed, bonds. If interest rates rise rapidly and/or substantially, the price of TIPS will likely decline. However, here are the two key points worth noting with respect to rising rates:


If interest rates fall, TIPS should do well because bond prices generally will rise. While we believe TIPS will likely underperform nominal Treasuries in a low inflation, low interest-rate environment, our expectation is that they would still have positive returns.


We believe TIPS valuations are attractive today. We will explain why by discussing recent trends, as well as by analyzing the weakness in the recent Consumer Price Index (CPI) reports.

From the end of 2014 to the end of 2016, core inflation (CPI inflation excluding the volatile energy and food components) rose from 1.6% to 2.2%. This move made sense in light of the labor market’s tightening, the national unemployment rate falling from 5.6% to 4.7% over that same period and the money having been printed during three rounds of quantitative easing remaining in the financial system.


However, core inflation has softened noticeably in recent months, with the year-over-year rate declining back down to 1.7% in May. While this softening has been surprisingly persistent over the past three months, there are reasons to believe inflation will rebound back to the +2% trend in the months ahead.


First, nearly half of the recent decline can be attributed to one-off factors that, to us, appear unlikely to further weigh on CPI going forward. Second, labor market slack continues to decline and wage pressures are gradually rising. Wage growth, as measured by the Atlanta Federal Reserve Bank, remains at a robust level of 3.4%. As this wage pressure builds, and with May’s 4.3% unemployment rate indicating a tight labor market, we think the conditions are ripe for inflation to gradually move higher in the months to come.

In her June press conference, Chair Janet Yellen indicated that the Fed shares these views. In response to a question on inflation, Yellen said, “There have been some idiosyncratic factors I think that have held down inflation in recent months,” and that Fed policymakers “continue to feel that with a strong labor market … the conditions are in place for inflation to move up.”


In April of this year, the Bureau of Labor Statistics released the CPI estimate for March. Along with most of the market, we were surprised to see that core inflation fell from February by 0.12% — the biggest month-over-month decline since 1962. This was followed by a 0.07% increase in April, which was also below market expectations. As a result, the year-over-year rate slowed to 1.9% from 2.2% in February. Looking into the details of these inflation reports, our view is that this will likely be a temporary slowdown, and that in the next few months we should see CPI return to a trend of between 2.0% and 2.5%.


The biggest negative surprise in the March CPI report was wireless telephone service prices. Absent this factor, core CPI was positive for the month. We think this reflects a one-time adjustment. In April, physician services surprised with the largest monthly drop in 25 years. Given historical changes in the series and the lack of a clear cause, we believe the move to be a temporary outlier and to reverse in the months to come.


There were other categories that were weak for more structural reasons, such as new and used vehicle prices, which are declining due to elevated auto inventory-to-sales ratios. However, other core components remain robust, led by shelter and medical care services (excluding the temporary drop in physician services) that make up more than 58% of core CPI. With the labor market continuing to tighten, the unemployment rate falling to 4.3% and economic growth steady at around 2%, we see little reason to think the weakness in inflation will persist in the months ahead.


TIPS are unique because they are explicitly linked to CPI inflation, therefore offering a direct means of protecting purchasing power over time. American Funds Inflation Linked Bond Fund® can provide investors an allocation to TIPS, which are an out-of-benchmark (Bloomberg Barclays U.S. Aggregate Index) allocation for core bond funds. Depending on market valuations, these funds may or may not hold TIPS. A dedicated allocation to TIPS like our fund offers can complement a broader bond portfolio which may not hold up well in an inflationary environment. Since TIPS are government bonds, they can also add a measure of stability to portfolios in times of equity market volatility. 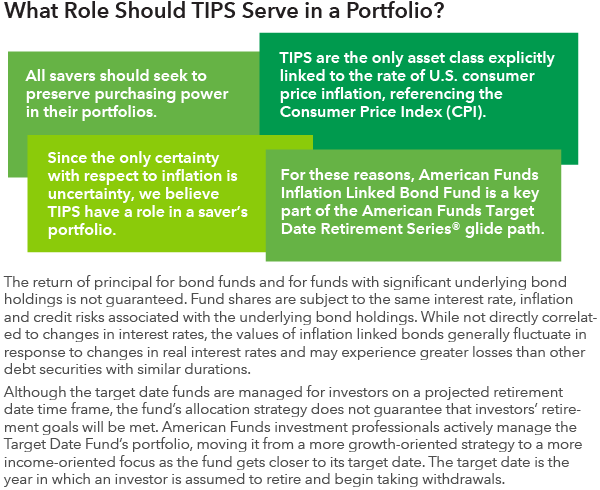 Timothy Ng is a fixed income portfolio manager with 15 years of industry experience (as of 12/31/2020). He holds a bachelor's degree with honors in computer science from the University of Waterloo, Ontario.