Rising rates an opportunity to seize, not a risk to avoid

Pramod Atluri, a portfolio manager for the Bond Fund of America®, discusses his outlook for the global economy and bond markets.


What is your outlook for the global economy?


Global economic growth today is better than it was a year ago. It continues to accelerate in all the major developed markets. I agree with the consensus that the U.S. economy will grow in the range of 2% to 3% with some potential upside. Europe is on a growth path and has momentum. Brazil is coming out of its recession. The U.K. has some uncertainty, given concerns around Brexit, but its economy is doing fine. China continues to generate steady growth that I believe will continue in 2018. However, longer term concerns persist due to very high and increasing debt levels alongside a somewhat unbalanced economy. The largest risks I see on the horizon are geopolitical in nature, such as events related to North Korea, rising trade tensions or the ever present fear of a China stumble.

And your expectations for monetary policy and specifically quantitative easing?


With economic growth positive and accelerating, the U.S. Federal Reserve is expected to continue raising interest rates but at a very gradual and careful pace that should keep monetary policy highly accommodative for much of 2018. Our interest rates team believes the Fed will hike rates a few more times in 2018. This is roughly in line with both market expectations and Fed guidance.


That said, there is a risk that the Fed funds rate will move even higher or faster if fiscal stimulus efforts are successfully passed or inflation strengthens significantly. On the flipside, the path of rate expectations could stall or even decline if we do get a geopolitical event.


A lot has been made of the potential impact of quantitative easing on financial conditions. But I believe the impact will be minimal. Even though central banks are starting to taper their bond purchases, in aggregate, quantitative easing is still expanding on a global basis. It may not be until 2019 that net central bank purchases finally go negative. And this assumes that the U.S. or other economies don’t stumble between now and then.


Central banks have given very clear guidance about the scope and pace of expected tapering. Markets have been given ample time to price this in. So I expect tapering to end up being a non-event. However, I do believe that global quantitative easing has played a large part in the decline of volatility in financial markets. You can see this in virtually every measure of volatility such as the VIX or MOVE indices.


While I do not expect a large spike in volatility because of tapering, I would expect that as central banks shift from being net buyers to net sellers of securities in 2019, we will finally start to see volatility move back to more normal levels.


What is your interest rate exposure like, given this backdrop?


Investors continue to worry about higher interest rates. But in my view, the rise in interest rates is an opportunity to be seized, not a risk to be avoided.


Bond markets have now priced in much of the positive economic story. There are still some upside risks to yields, but the magnitude is more like 50 basis points higher from here, not 150 basis points. Front-end interest rates should continue to grind higher as the Fed hikes interest rates, but yields have risen enough so that investors are now being adequately compensated for this risk with additional carry (interest).


The path of longer term interest rates such as those for 10-year and 30-year Treasuries is less clear. While both global growth and inflation are expected to strengthen and put pressure on long-term interest rates, investors are increasingly looking to de-risk their portfolios by selling risky assets in order to buy bonds. This has led to a significant curve flattening where long Treasuries have significantly outperformed shorter Treasuries.


Against this backdrop I have moved my positioning from being significantly underweight duration, primarily at the front end of the yield curve, to neutral versus the index. As interest rates gradually move higher in the first half of 2018, I expect to move my positioning to an overweight duration position, which should benefit as the economy moves from mid to late cycle and investors start worrying about the next risk flare or the possibility of a recession.

What about the fundamentals for investment-grade corporate bonds?


Although leverage has been rising as investment-grade companies have taken advantage of low interest rates to add debt, investment-grade corporate fundamentals remain strong. Any stress that we are seeing in corporate bonds is sector- and issuer-specific. For example, traditional retail is under a lot of pressure. Telecom is in flux, and energy is vulnerable to another decline in prices. But while this has led to a temporary increase in the default rate for high-yield issuers, the default rate for investment-grade corporates has remained virtually non-existent and I believe this will continue. 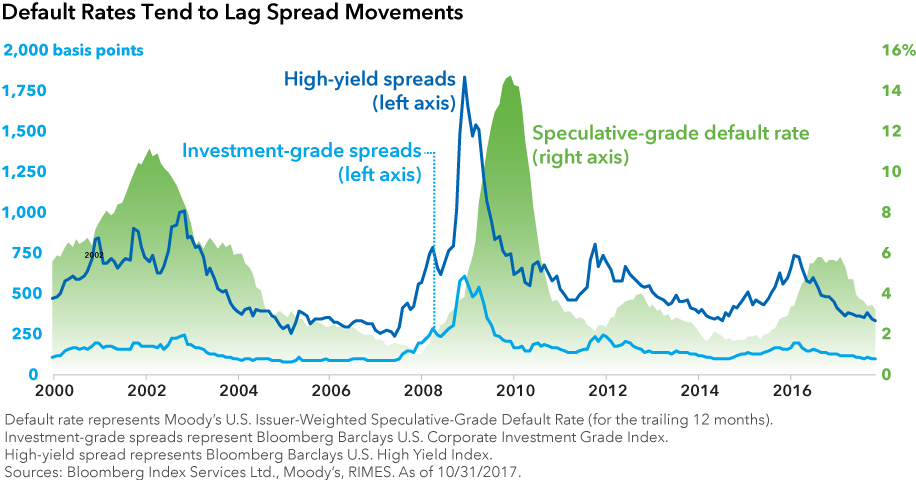 Given this outlook, how are you investing in investment-grade corporate bonds?


The combination of solid fundamentals and a benign economic outlook for 2018 has led to an enormous demand for corporate bonds. Adjusting for duration and credit quality, corporate spreads are at or near record tight levels. Our analysts continue to surface several attractive investment ideas across the fixed income landscape.


However, now that spreads and valuations appear fully priced, there is much more risk of spread widening than tightening. If I’ve learned one thing over the years, it’s that these low volatility environments don’t last forever. So I continue to harvest my gains, primarily in long-maturity corporate bonds that work best when spreads move tighter, and have moved the portfolio into short-duration corporate bonds that work best when economic fundamentals are stable and default rates are low.


What about mortgage-backed securities?


I believe that mortgage-backed securities have fully priced in the Fed’s tapering of MBS purchases, so I do not expect any major jump in spreads in the near term. The biggest drivers of mortgage bonds in 2018 should be the level and volatility of interest rates along with the health of the housing market, and to some extent financial deregulation.


What is your overall outlook for the fixed income markets in 2018?


I am relatively optimistic that the benign economic backdrop that we saw in 2017 will continue in 2018. We will see positive economic growth both in the U.S. and abroad with only pockets of weakness. When combined with still-accommodative monetary policy and a declining default rate, conditions should be fine for investors.


My base case expectation is for a 3% return for the Bloomberg Barclays Aggregate Index with a range of 1% to 5%. The 1% expectation represents an economy that avoids any geopolitical tail events, inflation continues to strengthen and the Fed hikes faster than expected. A 5% return expectation represents a scenario where the economy stagnates. I expect interest rates to remain range bound. I believe the 10-year Treasury will likely end 2018 in the 2.5% to 3% range; I see very little chance for it to spike to 4%.


I anticipate a greater possibility of credit spreads widening by 1% in response to an equity market correction than Treasury yields spiking 1% higher. I am gradually increasing my duration as interest rates drift up and selling corporate bonds and other risky assets. Investors are too worried about interest rates and not worried enough about a risk-off event. Investors should consider harvesting their gains and buying high-quality bonds as a way to diversify their portfolio because these good times won’t last forever.