It’s been a long, tough slog for dollar-based investors in international equities the past several years.  A remarkable run for the dollar raised doubts about making international stocks part of a well-diversified portfolio. Those concerns — planted by years of sluggish growth and political uncertainty in Europe, deflationary pressures in Japan and weak emerging-markets economies — appear to be coming to an end.


This correction suggests strength in the dollar may have run its course. Past history shows that currency cycles have generally lasted for five to eight years. Our currency analyst believes we are now in a period of gradual dollar weakness after an extended era of dollar strength that lasted from early 2011 to late 2016.


“The dollar really rallied hard in 2014, but now I am getting greater conviction that the dollar has peaked and will weaken over the next two to three years,” says Capital Group currency analyst Jens Søndergaard. “We’ve unwound the ‘Trump-bump’ in the dollar and are back at pre-election levels. As long as the global economy picks up and the Fed is cautious about interest rate hikes, this should be conducive for international equities with greater non U.S. revenue exposure.”


In periods of secular dollar weakness, “it is a mistake for investors to have their international and global equity exposure through currency-hedged vehicles. Investors risk leaving on the table a meaningful portion of total return by investing in these hedged strategies,” says Capital Group investment specialist Marc Nabi. “Historically, a significant portion of total return from international and global equity has accrued from the currency portion,” especially in periods of dollar weakness." 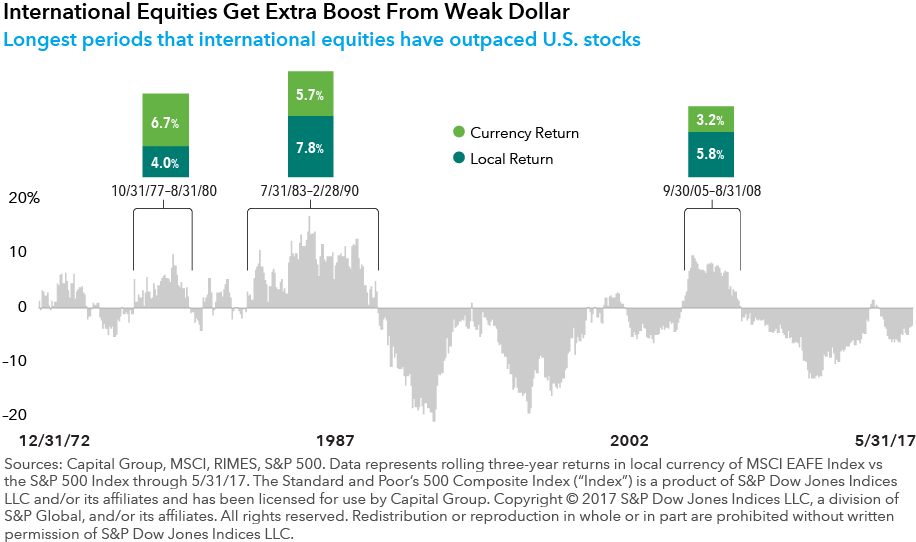 
Why would the dollar weaken or stay at these levels? There are several factors.


Skepticism is increasing that the new U.S. administration can make good on the agenda it initially outlined, namely loosening financial regulations, pushing through business-friendly tax cuts and rolling out of a major infrastructure program. Moreover, senior U.S. officials are expressing a desire to devalue the dollar — a bluntness not seen in past administrations.


On another front, there is growing belief that the global economy is in the midst of a broad-based recovery, moving in lockstep for the first time since the 2008 financial crisis.

Europe finally appears to be turning the corner.


The euro zone registered gross domestic product growth of 2.3% on an annualized basis in the first quarter, up from 2.1% in the fourth quarter. Euro-area manufacturing and services continue to gain momentum as well, which could further support the euro. Meanwhile, Japan’s economy expanded for the fifth consecutive quarter growing at an annualized pace of 2.2% for the January to March period.


In addition, European political risks are receding after a wave of populist-minded politicians failed to win majorities at the voting polls. The latest example was France, where centrist Emmanuel Macron won the presidential election in decisive fashion, calming fears that France might abandon the European Union and spur a breakup of the 28-nation bloc.


“The global economy is doing well and investor sentiment is improving, which is quite a departure from last year when everyone was worried about China, Brexit and negative interest rates,” says Capital Group portfolio manager Lisa Thompson. “It’s not just the U.S. anymore, it’s Japan, Europe and a number of emerging markets where we are seeing better economic growth, rising consumer spending and signs of higher inflation.”


Already, a weakening dollar and a global recovery are boosting international portfolios. Take Europe for example.


In dollar terms, U.S.-based investors buying shares of European companies are reaping solid returns after no gains in the previous two calendar years. Year to date through June 16, the MSCI European Index is up 16%, outpacing the 10% gain for the S&P 500.


Emerging markets tell a similar story. The MSCI Emerging Markets Index is on track for its best annual gain since 2012, with a 17% increase so far this year.


There could be more upside: “The long-term devaluation of currencies such as the yen, the euro and pound against the dollar has made many European and Japanese firms more competitive relative to their U.S. counterparts. European and Japanese companies are starting to see higher dollar sales," Nabi says. "This takes time to work through companies’ income statements, and operating leverage will vary, but as the dollar has stopped rising, this headwind is slowly turning into a tailwind and we should see this come through in earnings."


Furthermore, valuations are becoming hard to ignore. European equity valuations are appealing, particularly in relation to U.S. stocks, which have outpaced their European counterparts for more than eight years. 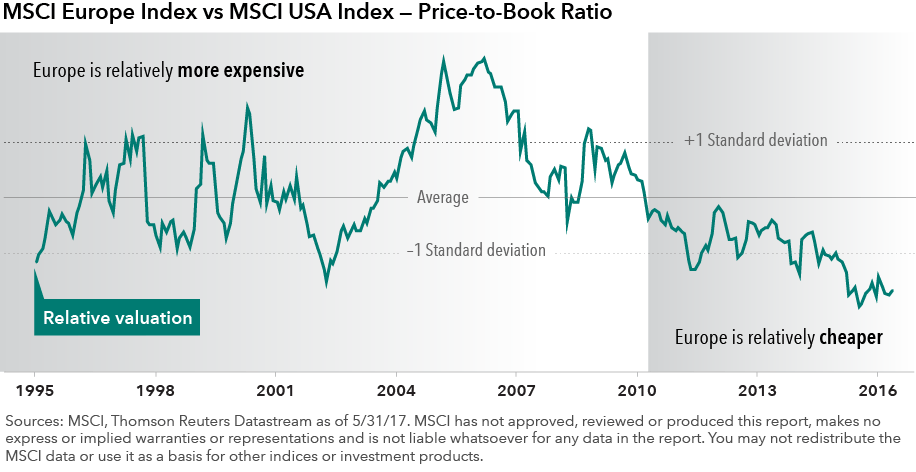 For instance, the MSCI Europe Index, whose constituents are listed in 15 developed countries, trades at 15.3 times estimated earnings for the next 12 months, compared with 17.9 times for the MSCI USA Index, as of May 31, 2017. This disparity has made for pronounced valuation gaps between European companies and their U.S. counterparts. This is especially true in areas such as banking, oil and household staples.


Emerging markets trade at an even steeper discount and appear to have more room to run: Earnings are rebounding, cash flows are improving and the dollar is weakening. This often has been a recipe that drives share prices in the developing world.


“If the dollar really has turned and we are in the early innings of the next eight- to 10-year dollar bear market, this could drive big, relative returns for non-U.S. equities since they are so much cheaper at current valuations,” says Paul Benjamin, an equity investment analyst at Capital Group.