Stocks pull back amid signs of rising rates and higher inflation

The equity market lost more than 8% in a few weeks’ time. This decline to the S&P 500 Composite Index, which began in late January, is the first of its kind since 2016. This volatility comes as investors come to terms with a new economic and investment environment of higher interest rates and rising inflation.

The current volatility in equity markets is likely a sign that financial markets are coming to grips with the idea that the low growth environment may be giving way to a stronger cycle with rising inflation. Stock and bond markets have declined amid concerns about stronger-than-expected U.S. economic data. Selling accelerated on Friday and Monday as robust U.S. job growth, and even better wage growth, led many investors to conclude that significantly higher inflation might be just around the corner, leading to higher interest rates.


Strong wage growth was the big surprise. Friday’s announced 2.9% year-over-year increase in pay is the highest rate of growth since 2009, and it is essentially the missing link in the U.S. economic recovery story. With the unemployment rate at a 17-year low of 4.1%, GDP growth at a healthy 2.6% and recent federal tax cuts expected to boost consumer and business spending, investors are worried that the U.S. economy may be showing early signs of overheating. That could lead to rising inflation this year and a steeper rise in interest rates than the market was previously expecting.


Investors’ unease first showed up in the bond market. Over the past five weeks, the yield on the benchmark 10-year Treasury note rose more than 30 basis points to north of 2.7%, a big move in such a short period of time.


The global economic cycle started to get in sync in 2017. The flipside of more robust growth is that central banks are also more likely to raise rates. That means even on the back of the Fed’s 125 basis points of rate hikes since late 2015, the market is taking seriously its threat to raise rates three or more times in 2018 and perhaps 2019. In the meantime, the Bank of England has also begun raising rates as the European Central Bank is cutting its bond purchases in half this year. That provides the market a sobering reality that ultra-low interest rates, which have been so supportive of economic growth and asset prices, may be changing and could force investors to re-evaluate expectations.


The economic engine is roaring


Despite the U.S. having been in recovery since 2009, its economic data continues to improve. After strong growth in the latter part of 2017, markets expect a healthy dose of stimulus from tax cuts passed late last year.


The missing piece of the puzzle in recent years has been wage growth. Last week, that began to look on better footing as well. While the 200,000 new January jobs reported on February 2 suggests robust hiring, wage growth accelerated to 2.9% year-over-year – the fastest pace in eight years. While my base case for wages growth has been a gradual acceleration in 2018 and 2019, as labor market slack tightens and the economy approaches full employment, it seems the market has taken this as evidence that the economy is stronger than some expected.

It also implies that inflation could be rising. It broke out of its mid-2017 range later in the year, with the Consumer Price Index rising up to and slightly above the Fed’s 2% target by year-end. If higher wages figure in, this could help to propel consumer price growth higher later this year. 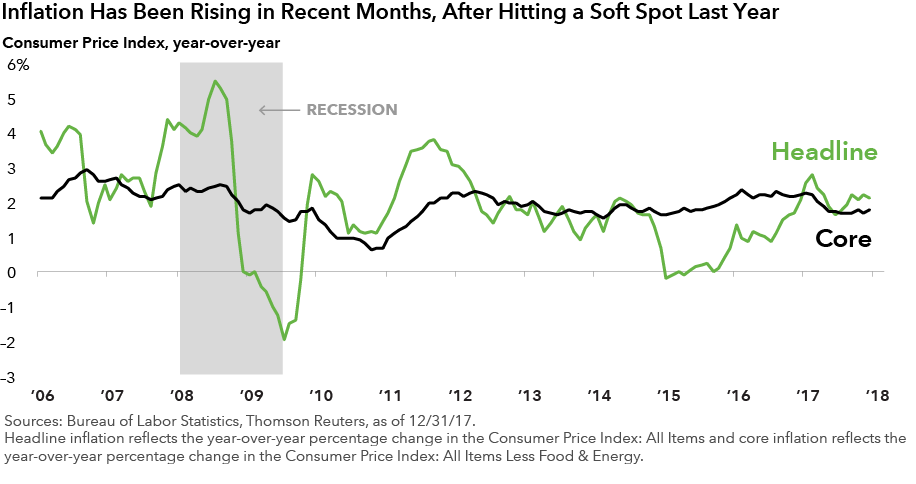 
An uptick in inflation provides the Fed strong cover to make good on its rate hiking projections, which the market had been somewhat sanguine about. Investors had also been complacent on the impact of central bank tightening – until now. Goldman Sachs’s Financial Conditions Index (a measure that takes into account short-term bond yields, long-term corporate bond yields, the dollar exchange rate and equity prices) began to spike in the week ending February 2, after bottoming out in late January to indicate the easiest financial conditions in more than a decade.


In addition to recent stock market volatility, this re-evaluation is evident in fixed income markets, where this stronger-than-expected economic data during the past five weeks helped yields to climb. The 10-year Treasury yield has risen roughly 30 basis points to above 2.70%, a level not seen since April 2014.  That was following the end of the so-called “taper tantrum” sparked by the Federal Reserve’s 2013 announcement that the central bank was planning to reduce its bond-buying stimulus program.


However, bond yields still remain historically low. In my view, we won’t see another swing of this magnitude in the near term, but rates could approach 3% this year.

Where stocks go from here


What does this re-evaluation mean for U.S. stock valuations? There is less room for cushion with valuations higher than normal; however, looking at earnings, there’s reasons to be constructive. Global consumers are spending, corporate balance sheets are relatively stable and the U.S. tax cuts passed late last year could support upwards of low double-digit earnings growth in 2018. Looking into 2019, the stimulatory factors of 2018 may wane, which could result in more modest earnings growth.


Ultimately, better growth is positive for companies, but if the market hadn’t properly priced in the potential for financial conditions tightening, that could spell trouble. Equity markets may be looking beyond 2018 to determine how to discount cash flows in a rising rate environment. Tightening financial conditions could temper investors’ enthusiasm. The current volatility could be a signal that valuations are now more grounded in reality. Whether additional volatility occurs depends on how much tighter financial conditions actually become. Rising political uncertainty in Washington has also dampened market sentiment in recent days.


It’s important to remember that the current market decline represents a pullback for a U.S. stock market that has gone up 30% since January 2016. So this pullback represents a healthy decline.


Over the medium term, I expect stocks to continue to be supported by earnings that have been stronger for companies not just in the U.S., but also in Europe and Asia.