How long can the economic expansion continue? Our U.S. economist weighs in


What is your outlook for the U.S. economy?


The U.S. economy has been in an expansion for a while now and is probably the furthest along in terms of global economic recoveries, but I think it still has a ways to go. Growth is likely to remain above potential and the unemployment rate is likely to continue to drop. In fact, some of the resource utilization measures that we look at suggest core inflation could hit, if not exceed, the Fed's unofficial 2% target by the end of 2018. So that is something that we're watching pretty closely. And I think the Federal Reserve will continue to tighten gradually. I think two to three rate increases in 2018 is probably a reasonable assumption unless, again, growth or inflation really do something different than expected. 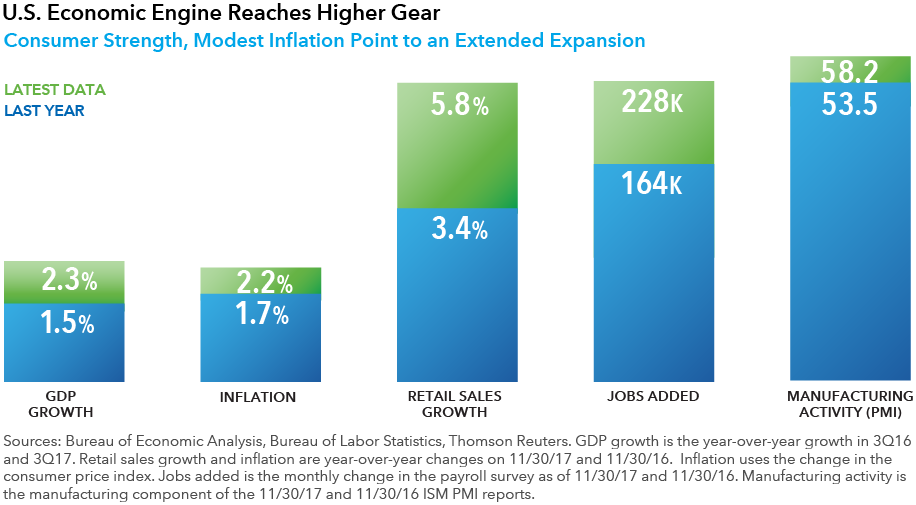 The duration of the U.S. recovery is longer than the average expansion. How much longer can it last?


On average in the post-war period, expansions have lasted 60 months, and we're now over 100. So it has definitely been longer than your average expansion, but if we're going to talk about averages, let me give you a different way to think about it. On average, the economy has expanded to 123% of its prior peak before rolling over into a recession, and right now we're at 115% of the prior peak. So from that perspective, we are below the average of prior expansions. Essentially growth has been slower in this expansion than it has been in the past. But the reason that's important is because we think recessions are caused by excesses and imbalances that build up in the system that ultimately need to be corrected, and slower growth means they take longer to materialize. There doesn’t appear to be anything systemic, or any big imbalances that we think are of a significant size and nature that would push the U.S. economy into a recession, within the next 12 to 18 months.

What do you expect the economic impact to be of tax reform?


It’s hard to put $1.5 trillion into the economy and not have an impact, and we’ll likely see that in 2018 and 2019. We estimate it would add about 25 basis points to GDP growth in 2018 and slightly less than that in 2019, but could be higher depending on how individuals spend that money. As far as which parts of the economy are impacted, consumers will obviously benefit as a lower tax bill can be meaningful, especially for lower income households. What may be underappreciated by the market is the impact of capital expenditures. Favorable treatment for capex could pull forward some planned projects into 2018 and 2019. Finally, it seems logical that any uptick in growth and inflation could cause the Federal Reserve to accelerate the pace of rate hikes in the next couple years.


What is your view on current U.S. equity valuation levels?


P/E ratios are higher than they have been historically, but you need to look at them in the context of where interest rates are, which is why the interest rate outlook is so important for the equity market outlook. If we do think rates, particularly at the long end, are likely to remain lower for longer, then I think these types of multiples are sustainable. The market has done very well over the past 12 months, but valuations haven’t really changed much because the rally has largely been based on better earnings growth. 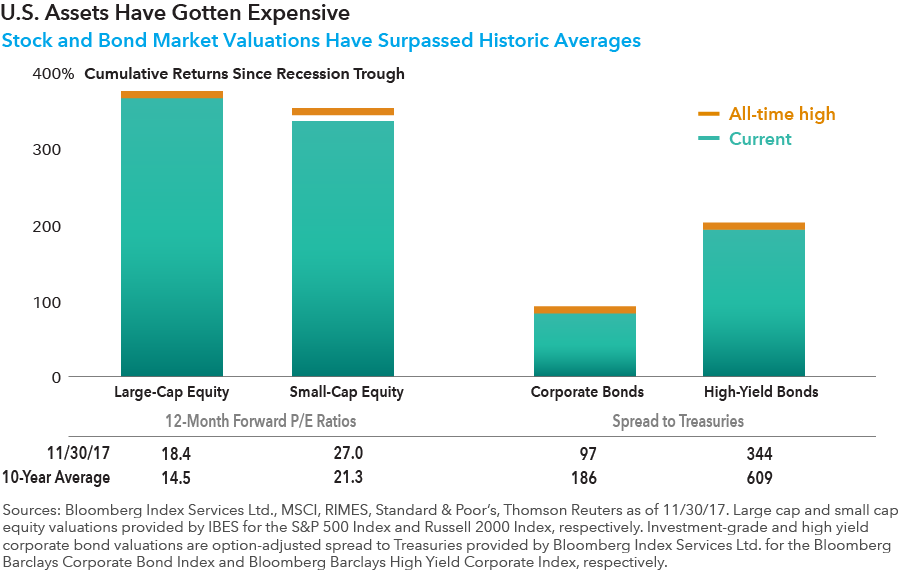 What should investors expect in the event of a market pullback?


Not all bear markets are created equal. Some are short. Some are long. Some are not very severe. Some are obviously very severe. But what we have found is that the ones that are the most severe and last the longest tend to be, not surprisingly, associated with recessions. But the economy has been strong and we don’t really see excesses or imbalances developing. So if there was some market weakness over the next 12 months or so, I would suggest it would be more of a buying opportunity than a risk of a big bear market that would normally be associated with a recession.


Darrell R. Spence covers the United States as an economist. Darrell has 29 years of industry experience (as of 12/31/2021). He holds a bachelor’s degree in economics from Occidental College. He also holds the Chartered Financial Analyst® designation and is a member of the National Association for Business Economics.