After several years of relative calm and healthy returns, financial markets are on edge. In a volatile first quarter, developed-market stocks and bonds declined amid inflationary pressures, rising interest rates, turmoil in the technology sector and a growing trade dispute between the United States and China — the world’s two largest economies.


Given heightened interest in these market-moving events, Capital Group’s investment team offers the following perspective on the return of volatility and the long-term outlook for certain asset classes:


The return of market volatility is expected and healthy.


Capital Group Chairman and Chief Executive Officer Tim Armour believes the recent declines should be framed in the context of a multi-year bull market where key indexes have soared to record highs. Valuations for U.S. stocks have been high and, in such a market, periodic drops of 10% or more are not only common throughout history, they are healthy. They help to remove the froth from a market that may be running too far ahead of itself, bringing asset prices back in line with underlying fundamentals.

“We were overdue for some kind of correction,” Armour explained. “As you know, we remain focused on the long term. We still feel good about the economic backdrop for corporate earnings, and we think there are plenty of opportunities. I am not overly concerned about this pullback. Markets do better over the long term when they experience corrections periodically; they can’t go up all the time.”


U.S. interest rates should stay range-bound despite uptick in inflation.


One of the most important market factors is the level of interest rates, or more precisely, investor expectations for the future level of interest rates. Signs of inflationary pressures — including higher-than-expected wage growth — have driven interest rates up in recent months. However, that too must be considered in the context of a historically low interest-rate environment that has persisted since the 2008–09 financial crisis.

Despite a shift toward tighter monetary policy at the U.S. Federal Reserve, interest rates are likely to remain “range bound,” noted Tom Hollenberg, a fixed income analyst at Capital. And longer term yields could even fall if the strength of the late-cycle U.S. economy begins to fade.


“I see the 10-year Treasury bond yield remaining around 3% in the near term,” Hollenberg said, “unless global growth and inflation appear to be accelerating at an even more rapid pace than currently anticipated. That is still quite low on a historical basis and should continue to support economic growth.”


Stocks pull back amid signs of rising rates and higher inflation.


“There is less room for cushion with valuations higher than normal; however, looking at earnings, there are reasons to be constructive,” Franz noted. “Global consumers are spending, corporate balance sheets are relatively stable and the U.S. tax cuts passed late last year could support upwards of low double-digit earnings growth in 2018. Ultimately, better growth is positive for companies.”


A looming threat to global economic growth is the deteriorating trade relationship between the United States and China. Billions of dollars in tariffs and other punitive measures are being thrown back and forth by the two global heavyweights, along with a lot of tough-sounding rhetoric, and the discord appears to have no end in sight. That said, a U.S.-China trade dispute is not likely to derail the global economic recovery, says Capital Group Vice Chairman and portfolio manager Rob Lovelace.

“For a trading system to survive and thrive over the long term, interdependence is critical,” Lovelace explained. “These trade negotiations and disputes are now an element in a strategic struggle that is likely to last until China changes its approach on some fronts, and until the U.S. and China agree on a new balance that both can live with.”

The return of volatility has hit the technology sector hardest. In March, tech stocks encountered a number of challenges, including government regulatory scrutiny over data-sharing polices at Facebook, escalating trade tensions with China, a more difficult M&A environment and renewed concerns over valuations. 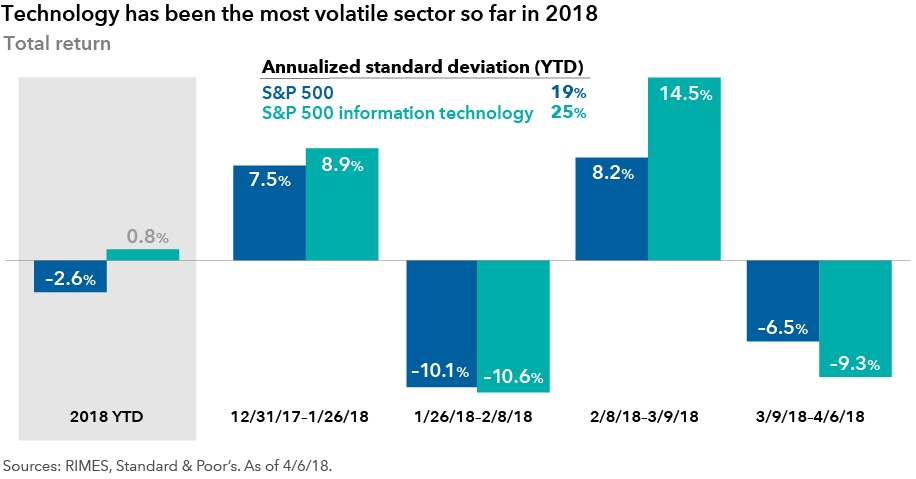 Despite these issues, the long-term outlook for some of the largest and most well-known tech companies remains excellent, said Capital technology analyst Irfan Furniturewala. Those companies include the so-called FAANGs — Facebook, Amazon, Apple, Netflix and Alphabet’s Google — which have come under intense pressure in recent weeks. In the case of Facebook, a serious mistake involving user privacy has hurt the company in the short-term, but management will likely correct the situation and continue to drive shareholder value in the years ahead, Furniturewala said.


“These technology leaders absolutely dominate their respective industries,” Furniturewala explained. “They have earned their leading positions. The long-term runway looks very attractive, in my view.”

Although volatile markets can be difficult to stomach, a look back at history shows that bull markets outnumber bear markets — in both results and frequency — by a wide margin. This is one reason why it’s important for investors to maintain a long-term perspective, stay invested in a well-diversified portfolio and avoid making panic-induced decisions during market downturns. 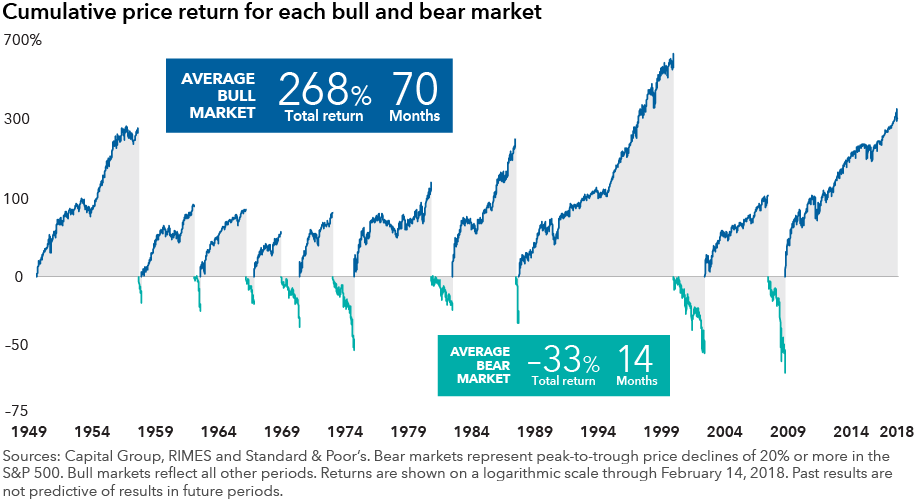 Rather than indiscriminate selling, investors who are nervous about heightened volatility may want to consider flexible equity funds with a history of resilience during downturns. Investors should also re-examine their bond exposure for excess risk, as diversification from equities is one of the primary roles of fixed-income securities in a balanced portfolio.