Millennials are growing more confident in the economy
October 9, 2016 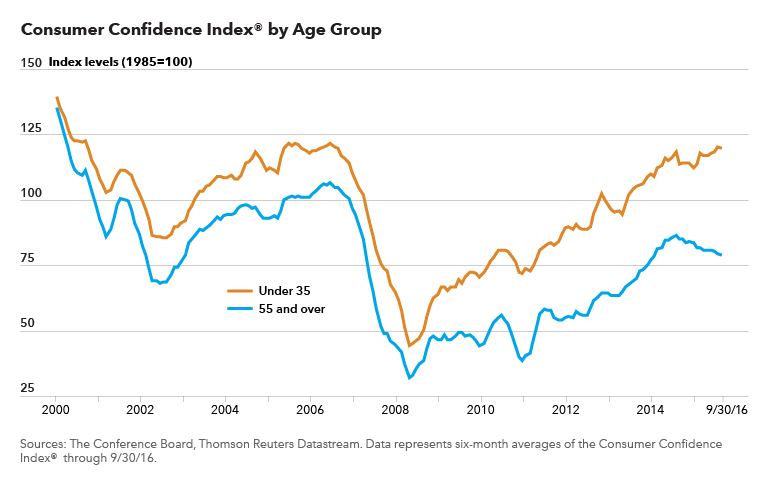 Consumer confidence usually moves in a similar direction across age brackets, but in the past year the youngest cohort continued to gain confidence, while those aged 55 and over are becoming less optimistic about the U.S. economy. One explanation for the divergence is that Baby Boomers have become more concerned about persistently low interest rates that could limit income in retirement. Millennials will likely be the biggest earners and spenders in the future and are more positive about their prospects as the U.S. economy continues to expand modestly.


Markets have been calm despite an uncertain economic and political environment


There has been no shortage of political drama over the past several months — the U.S. election results, Brexit, and this past weekend’s French elections, to name a few. But if the old adage that markets hate uncertainty is true, they aren’t showing it. Despite heightened economic and political ambiguity, equity volatility has been subdued while U.S. indexes have reached all-time highs. “Especially in an environment of regime change and high policy uncertainty, market efficiency is not instantaneous, but a process. This creates room for active management to add value,” portfolio manager Wesley Phoa says.


For more of Phoa’s thoughts and investment strategies to use in the current environment, see his full article.