Here’s why you shouldn’t give up on international stocks
March 2, 2017
KEY TAKEAWAYS

A powerful rally in U.S. stocks since the November elections has underscored a long-running trend in the financial markets: U.S. stocks have outpaced developed-market equities in Europe and Japan for 86 months on a rolling three-year basis. Despite the dominance of U.S. stocks during this seven-year period, there are many compelling reasons to remain invested in international stocks as part of a well-diversified portfolio.


It’s important to remember that financial markets are increasingly global in nature. That means companies headquartered in the U.S., Europe and Japan don’t necessarily generate most of their earnings there. Daimler and BMW, for instance, sell far more cars outside Germany — and outside Europe, for that matter — than they do within the confines of their homeland. Ditto for Japan’s Toyota, which counts the U.S. as its biggest market, and European bank HSBC, which does much more business in Asia.


Since 2008, shares of non-U.S. companies with significant exposure to the U.S. economy have done well, thanks in part to the country’s role as a global economic engine. Just a few of the powerhouse non-U.S. companies in that mix include: Nestlé, Novartis, Roche, Toyota, British American Tobacco and Anheuser-Busch InBev. 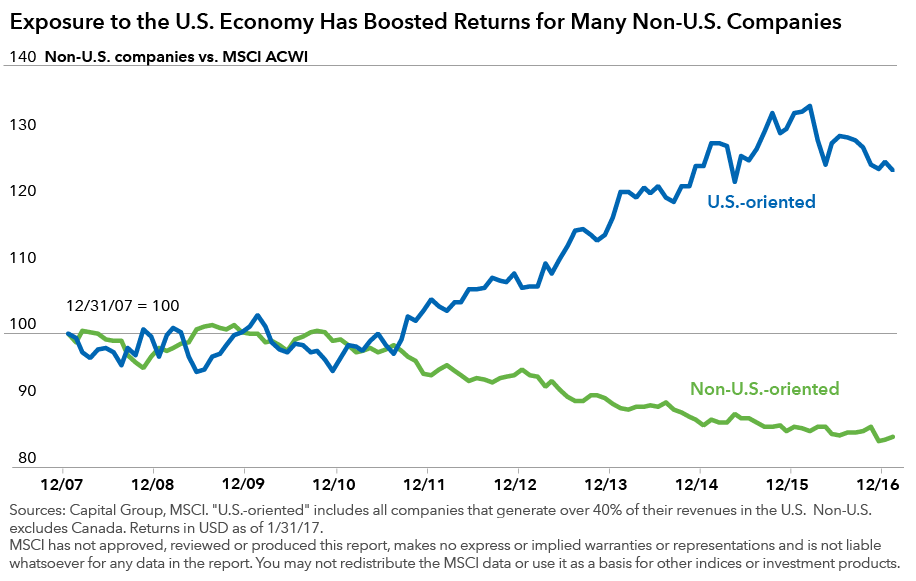 “This is why we invest in companies and not economies,” says Jody Jonsson, an equity portfolio manager at Capital Group. “There are many places in the world where we look for well-managed companies and remain optimistic about the potential for attractive returns — whether it’s the U.S., Europe, Japan or any number of emerging markets.”


“No matter where you look to invest,” Jonsson continues, “there will always be questions about economic growth, government policies or political change. But the opportunities are there, despite the political or economic challenges faced by a particular country or region.”


Europe and Japan picking up the pace


With that said, it doesn’t hurt to have some economic tailwinds. There are signs that gross domestic product (GDP) growth is improving in Europe and Japan, boosted by central bank stimulus programs and ultra-low interest rates.


The Bank of Japan estimates that GDP growth will accelerate to 1.4% this year, from 1% previously, and to 1.5% in 2018, supported by stimulus measures, increased government spending, and rising demand for Japanese exports to the U.S, Europe and China.


The 19-member euro zone, meanwhile, has experienced a substantial rebound since the recessionary years of 2012–13. The Euro-Zone Purchasing Managers’ Index, a good indicator of future GDP growth trends, signals even higher growth in the months ahead. Euro-zone GDP growth stood at 1.7% for the calendar year 2016, roughly the same as the U.S. rate. That’s the first time the euro zone has kept pace with the U.S. economy since the start of the 2008–09 financial crisis.


In recent years, a strong and rising U.S. dollar has hurt investment returns at times for dollar-based investors in European and Japanese equities. But here, too, there are signs that these currency trends could be shifting back toward historical norms. While it’s always difficult to call a top, the dollar appears to be about 10% overvalued, based on the fundamentals, and it therefore could be on course to weaken against the euro and the yen later this year and into next year, says Capital Group currencies analyst Jens Søndergaard.


“A more stable currency environment should help dollar-based investors when they convert from local currency returns,” Søndergaard explains. “This could provide a nice tailwind for international equities, even though it may put some pressure on the earnings of export-oriented companies that have benefited from a weakening euro or yen.”


Another cloud hanging over international equities, particularly in Europe, is the upcoming federal elections in France and Germany. Protectionist, nationalist and anti-immigration movements in Europe have gained some momentum following the U.K.’s Brexit vote in June and Donald Trump’s rise to the U.S. presidency.


Of course, the outcome of these crucial elections remains to be seen. But if extremist candidates stay on the fringes, as expected, then that could set the stage for a rebound in European stocks, says Capital Group political economist Talha Khan. “Financial markets will fret over the short-term uncertainty, but once we are past the French and German elections, we should have a better sense of the path ahead.”


The U.S. stock market rally has created one other interesting trend to watch: U.S. company valuations are relatively high, compared to some European and Japanese companies, meaning bargain-hunting investors should at least be mindful of the relative-value opportunities. Certain companies in Europe and Japan are trading at a significant discount to their U.S. competitors, especially in the banking and oil & gas sectors.


For instance, U.S.-based banking giant JPMorgan Chase trades at a significantly higher price — based on a 12-month forward price-to-earnings ratio — than French bank BNP Paribas. JPMorgan’s P/E ratio is 13, verses 9 for BNP, as of February 24, 2017. Among oil companies, U.S.-based Exxon Mobil carries a P/E ratio of 19, while the U.K.’s Royal Dutch Shell trades at 14 and France’s Total stands at 12.

This can’t go on forever, can it?


From an investor-psychology perspective, it may feel like U.S. stocks will outshine international stocks forever. However, based on historical price trends, that is unlikely to be the case. The chart below shows the cyclical tendencies of U.S. stocks versus international stocks. Indeed, there were significant time periods when U.S. stocks were the laggards, such as the period after the collapse of the technology stock bubble — or much of the 1980s, a decade when Japan’s “economic miracle” sent Japanese stocks soaring to record highs.

“One of the interesting things about being in this business for more than 30 years is that I’ve lived through a few cycles where the U.S. has been the best market, and a few cycles where it hasn’t,” says Rob Lovelace, an equity portfolio manager with Capital Group. “It seems to take about five to seven years before people will throw in the towel and say, ‘I can’t recommend investing here anymore.’”


“While that sentiment is understandable, in my view, investors shouldn’t lock themselves into one geography,” Lovelace adds. “There are great companies all over the world. Our job is to find them, and invest in them, regardless of where they are domiciled.”