Tim Ng
Fixed Income Portfolio Manager
March 13, 2017
KEY TAKEAWAYS
When the Federal Reserve met this Wednesday, its committee members voted to raise the federal funds rate 25 basis points to a range of 0.75%–1.00%. The market anticipated this move, with futures pricing having indicated more than an 80% probability of a hike as of late last week. We see three central reasons why the Fed opted to raise rates.


Why the Fed hiked rates


1. Financial conditions have eased since late last year. Financial conditions are financial variables, including asset prices, that can influence economic behavior and thereby the future state of the economy. The broad dollar index is roughly unchanged, 10-year Treasury yields are slightly lower, credit spreads are tighter and the S&P 500 Index is up nearly 5% since the Fed raised rates in December.


2. The economy has continued to make progress toward the Fed’s mandated goals of full employment and price stability. The labor market continues to be strong, with the economy adding an average of 180,000 jobs per month over the past six months. This has kept the unemployment rate steady below 5%, which is already equivalent to the Fed’s long-run forecast for the non-accelerating inflation rate of unemployment, or NAIRU.


On price stability, inflation is gradually rising toward the Fed’s 2% target. The January reading of the annual change in the core personal consumption expenditures (PCE) price index rose to 1.74%, ahead of the Fed’s end-of-2017 forecast of 1.7% provided by its December projections.


3. In recent weeks, several Fed officials had strongly hinted at raising rates at the March meeting. That includes core members such as Chair Janet Yellen and New York Fed President William Dudley. In prepared remarks given last Friday, Chair Yellen said, “At our meeting later this month, the committee will evaluate whether employment and inflation are continuing to evolve in line with our expectations, in which case a further adjustment of the federal funds rate would likely be appropriate.”


In a recent interview, Dudley advised, “The case for monetary policy tightening has become a lot more compelling,” adding that a rate rise could come “in the relatively near future.” By hiking rates at this meeting, Fed officials gave themselves more flexibility to adjust policy for the remainder of this year and reduced the likelihood of “falling behind the curve” down the road, a concern that several officials have mentioned in the past. 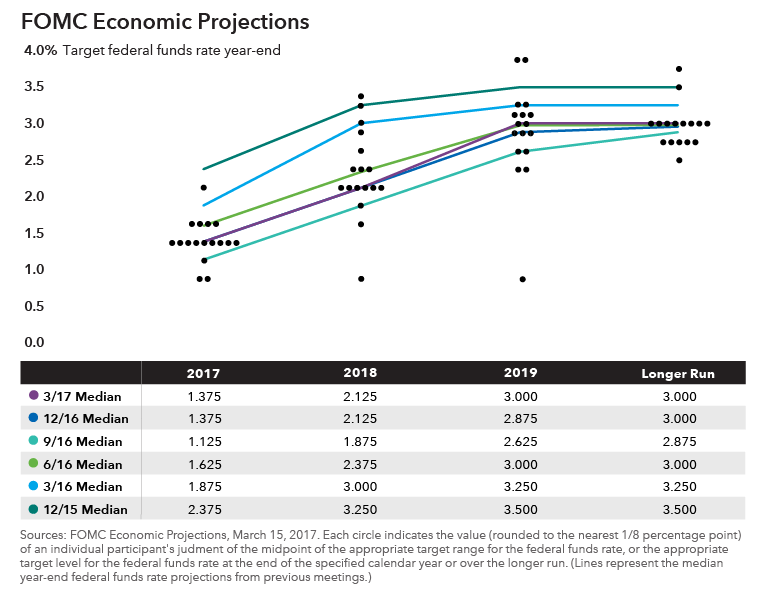 
The Fed may soon be joined in monetary tightening by the European Central Bank. President Mario Draghi, at a press conference last week, emphasized the euro zone’s “firming and broadening expansion.” This put upward pressure on rates globally as markets begin to look ahead to positive policy rates and an eventual end to European quantitative easing.


However, we think it is more likely that financial conditions will tighten once the market anticipates a faster pace of rate increases, which will then allow the Fed to hike more slowly. To illustrate this point, financial conditions tightened significantly after the Fed raised the fed funds rate in December 2015 and surprised the market by forecasting four hikes for 2016. In the end, the Fed was only able to hike once in 2016 as tighter financial conditions led the Fed to be more cautious about further removing monetary accommodation.

How did we get here?


Ritchie Tuazon is a fixed income portfolio manager with 21 years of industry experience (as of 12/31/2021). He holds an MBA from MIT, a master's in public administration from Harvard and a bachelor's from the University of California, Berkeley.