So far, equity markets are taking a positive view. Chinese stocks rallied nearly 15% during the first two months of the year, as measured by the MSCI China Investable Market Index. After a dismal 2018, investors appear to be hopeful for an economic rebound, coupled with a near-term agreement to avoid a full-blown U.S.-China trade war.


We may indeed see a trade agreement soon, but in my view, China’s economy will continue to weaken as stimulus measures fall short of market expectations and China’s traditional investment-led recoveries of the past fail to materialize. Yes, I’m saying it will be different this time.


Simply put, this cycle is unique in the decades-long history of China’s remarkable economic rise. Major segments of the economy are slowing in a coordinated fashion — housing, exports, manufacturing, consumer spending and business confidence alike. A bit more spending on railways isn’t going to reverse that momentum. It will take time for this cycle to play out.


Taking a step back and looking at the big picture, China’s growth rate is slowing because of major long-term trends in the economy, such as a declining workforce and lower productivity growth. This is the inevitable maturing process that occurs when an “emerging market” essentially outgrows that label. Add to that more cyclical factors — such as the government’s deleveraging efforts with State-Owned Enterprises (SOEs), a crackdown on the shadow banking system, and attempts to cool the housing market — and all of it puts a crimp on short-term growth.


Moreover, there appears to be no desire in Beijing to replicate the massive government stimulus measures launched in 2015–16, which boosted the economy and sent Chinese stocks soaring in 2017. The worry today is that another huge stimulus injection would cause the housing market to further skyrocket into bubble territory and exacerbate China’s daunting debt challenge. We’ve already seen a small stimulus package — in the form of minor tax cuts and lower reserve requirements for banks — but it’s not enough to move the needle significantly.


One key economic metric that I follow closely is the rate of credit growth, as it tends to be a reliable leading indicator. Year-over-year growth in credit, the lifeblood of any economy, has been experiencing a powerful downward trend since 2010. My estimate shows it moving up a bit in 2019 but, again, not enough to drastically change the slowing pace of China’s GDP growth. 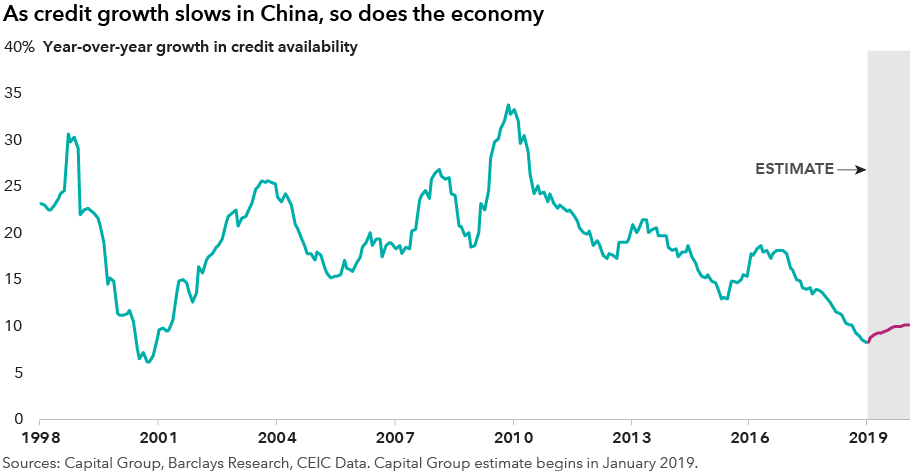 
Keep in mind, China’s economy — according to official government numbers — is still growing at an annual pace of 6.6%. That is a far cry, however, from the double-digit growth of a decade ago. (I am not going to delve into the reliability of the government’s economic statistics. Let’s just say, from here on, these are my own estimates.) In my view, China’s GDP growth will decline further in the years ahead, based on one of two scenarios outlined below.


For the record, my growth estimates were more optimistic a few years ago, based on a series of market reforms promised by government leaders, including reducing the dominant role of SOEs and fostering greater entrepreneurship in the private sector. Unfortunately, even though the government repeated these goals earlier this week, progress on these and other reforms has been largely disappointing.


China’s economic growth will slow to roughly 5% on average over the next five to six years, assuming at least some level of significant progress is made on the reform front. This reform-based scenario could benefit from a favorable compromise in U.S.-China trade negotiations, since it might give officials the opening they need to push through more aggressive market-oriented measures.


In this scenario, growth slows to 3%, in my view, principally due to negative overall productivity growth. Essentially, the productivity gains generated by innovative technology companies such as Alibaba and Tencent would be erased by loss-making SOEs and other government-oriented vehicles.


A mix of these two scenarios over the next few years is likely, in my view. Facing cyclical downturns, Beijing will try to do a bit more reform but will likely pull back from the most important steps. An average real growth rate of 4% through 2025 wouldn’t surprise me.


A continuing trade battle with the U.S. could hurt. We’ve already seen a significant dip in Chinese trade during the latter half of 2018, although the numbers have bounced back a bit early this year. The hit to confidence among the Chinese private sector has far outweighed the tariffs themselves. The U.S. also has suffered billions in lost trade and higher prices for its consumers. So both parties have a big incentive to at least reach a near-term deal that reduces existing tariffs and perhaps opens up additional limited trade opportunities on both sides of the Pacific. We may find out as early as this week. 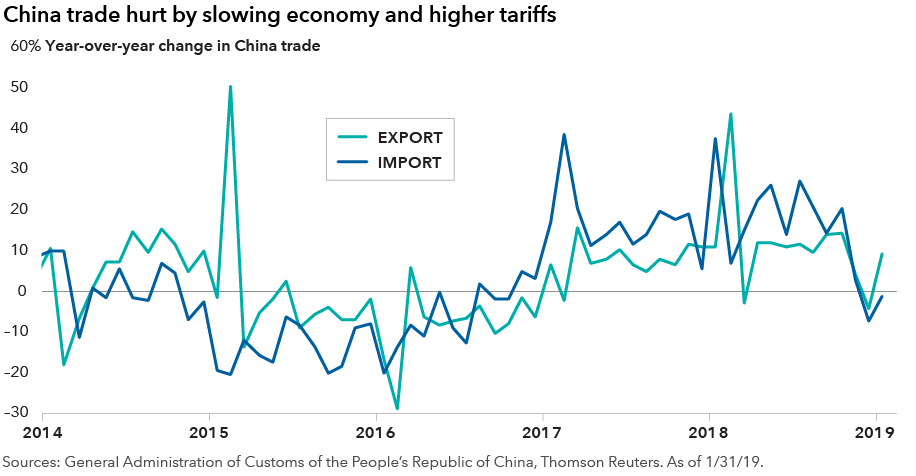 
In the fourth quarter, a number of American multinational companies warned of slowing revenue growth from China, and those reports contributed to a sharp selloff in global markets. That is something to keep in mind, but so are the long-term prospects for selling smartphones, tennis shoes and coffee in the world’s most populous country.


Among China-based publicly traded companies, aggregate valuations are certainly more attractive today than they were in 2017. Investors may also want to consider the implications if China further opens up to foreign companies as part of any future trade agreements.


In addition, China’s Stock Connect program has made it easier in recent years for international investors to buy into domestic A-share companies. Chinese software firms, for instance, are beginning to gain traction in the domestic market, and the fight is on to provide cloud-based services. A U.S.-China trade agreement might also boost protections for intellectual property, which would benefit the strongest domestic firms in this sector, as well as multinationals operating in China.


As always, selectivity and deep research are the keys to identifying these opportunities, especially against a challenging economic backdrop.