In this Q&A, Capital Group Vice Chairman and portfolio manager Rob Lovelace shares his thoughts on trade negotiations and their impact on multinational companies.


With tax legislation behind us, the U.S. administration is focused on trade. Negotiations on tariffs and a potential trade war have markets nervous. What is your view on what we might see unfold, both in the near term and the long term?


President Trump has talked about his issues with trade deficits for decades. It features in many of his public comments throughout his business career.  He has stated the U.S. needs better balance in trade accounts with all other countries.  In line with this view, the administration wants a dramatically reduced trade deficit in physical goods. It remains unclear if they will also focus on services and financial trade which is not included in the traditional trade-deficit numbers they usually talk about.  The current negotiations on tariffs with China should be viewed in that broader framework.


China recently presented its development agenda. Its leaders have set specific goals for 2025 in areas in which they want the country to excel. The list is long, but the more important areas from our vantage point as investors include semiconductors, robotics, industrial and agricultural machinery, aerospace equipment, high-speed rail, biomedicine and electric vehicles. China’s stated goal is to have world-class companies in these sectors, and the unstated goal is to have independence from foreign suppliers. 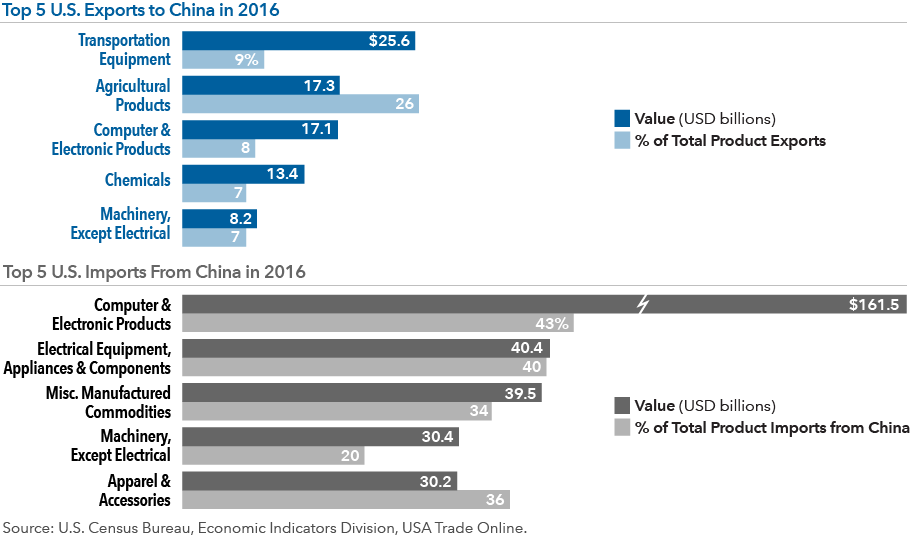 
There has always been some skepticism by multinationals operating in China about how much money they will ever be able to repatriate.  For example, many companies that rushed in to build independent power plants later found that the promised profits never materialized as regulations were changed.  Companies know they can grow their business in China and reinvest their profits, but once that is done, taking the money out is hard. That has not really changed.


The multinationals are also susceptible to having their products reverse-engineered, with domestic companies emerging as competitors using similar or adapted technology. As an example, Caterpillar, which has dominated the global market for many years, is now competing with Japanese and Chinese heavy equipment producers.

Rob Lovelace is Vice Chair and President of Capital Group as well as an equity portfolio manager with 36 years of investment experience. He holds a bachelor’s degree in mineral economics from Princeton University. He also holds the Chartered Financial Analyst® designation.