Here are eight charts that shed some light on the rebound in emerging markets and factors that could help sustain gains for stocks in the developing world.


Remember that ugly start for global markets in 2016? Much had to do with China and its weakening currency and slowing economy. After a nervous wave of selling that lasted several weeks, emerging markets have led the rebound, far outpacing the gains for the developed world. Brazil and Russia have been the biggest beneficiaries of the renewed interest in emerging markets.

What’s driving the rally? A sustained stimulus program in China that has helped to bolster commodity prices as well as boost the Chinese economy. The technology sector is also seeing strong growth.


Some of the biggest gains have been delivered by Asian technology companies, commodities producers and banks, particularly those in Brazil.


Of note is the Chinese internet sector, which is playing a key role in China’s shift to a services-led economy. Last year Tencent and Alibaba vaulted past China’s state-run enterprises to become the country’s most prized companies in terms of market value, underscoring the impact mobile commerce is having in the world’s No. 2 economy. Both firms run a range of services on their platforms.

“Our research suggests that the Chinese internet companies are as innovative as the U.S. internet companies, while evolving and growing in different ways,” says Winnie Kwan, a portfolio manager at Capital Group. “For instance, the Chinese companies are making tremendous strides in payments — so much so that I think we are now at an interesting juncture where China could leapfrog the U.S. in mobile payments infrastructure.”


Corporate profits are picking up. And historically that’s been good for share prices and dividends.

Companies in emerging markets are poised to produce their best annual earnings growth since 2010. In aggregate, earnings are estimated to increase 17% in 2017, led by the technology and industrials sectors, both of which are forecast to rise 28%, according to consensus estimates compiled by FactSet.


“Industrial automation is an investment theme of interest to us,” says Kent Chan, an investment specialist at Capital Group. “We are seeing rising labor costs not only in developed economies but also in China. Automation will be a long-term trend that will address these cost issues.”


4. The BRICs are back in town


How strong are the BRIC countries that fueled last decade’s rally? Each country faces its own headwinds, so it’s debatable.


Brazil is mired in its worst recession since the 1930s, with gross domestic product contracting in each of the last two years. However, hopes of political reform following a multiyear anticorruption campaign and higher commodity prices are helping equity prices. China’s economic data has surprised to the upside and stock prices are rising. Still, there are concerns about growth once the stimulus tapers off.

Russia’s economy is expected to grow again this year, but the world’s No. 1 oil producer remains under international trading sanctions and scrutiny for relationships with members of Trump’s administration.


All said, companies domiciled in Brazil, Russia, India and China are forecast to see stable earnings growth through 2018 after an uneven period comprising the last six years.


5. Discount in the EM aisle


These aren’t bargain basement prices, but emerging markets remain attractively valued — even on a historical basis. The MSCI Emerging Markets Investable Markets Index trades at 12.1 times expected earnings over the next 12 months. The MSCI World Index ex USA trades at 14.8 times, and the MSCI USA Index at 18.

To be sure, not every developing country or company is a bargain, so buyer beware.


It’s important to be selective. At Capital Group, our research suggests a focus on companies that stand to benefit from increasing internet penetration rates and rising wealth in developing countries, such as Asian technology firms, Indian banks and consumer-focused companies operating in emerging markets.


How strong has the comeback been?


The rally in emerging markets could have some more life as a number of countries trade well below their respective five-year highs. Brazil is 50% off its March 2012 peak, while Russia trades 38% below its high reached the same month. Chinese shares ran to a high in April 2015 and currently trade 25% off that mark.


Now, back to those commodities that are seen as leading indicators of global growth.


Iron ore, copper and aluminum have been on a tear, helping to boost sentiment for commodity-rich countries and share prices of industrial metal producers such as Brazil’s Vale and U.K.-based Rio Tinto.

China’s major stimulus program has been a chief reason for soaring raw materials prices. What could continue to support prices? Rising inflation in the U.S., Asia and Europe and the possibility the U.S. and other countries could embark on massive infrastructure spending programs of their own.


There’s also been a tech-tonic shift in emerging markets that is worth keeping in mind.


The largest companies by market value are now information technology and consumer-related firms, rather than the state-owned behemoths in the energy, materials and telecommunication services sectors. 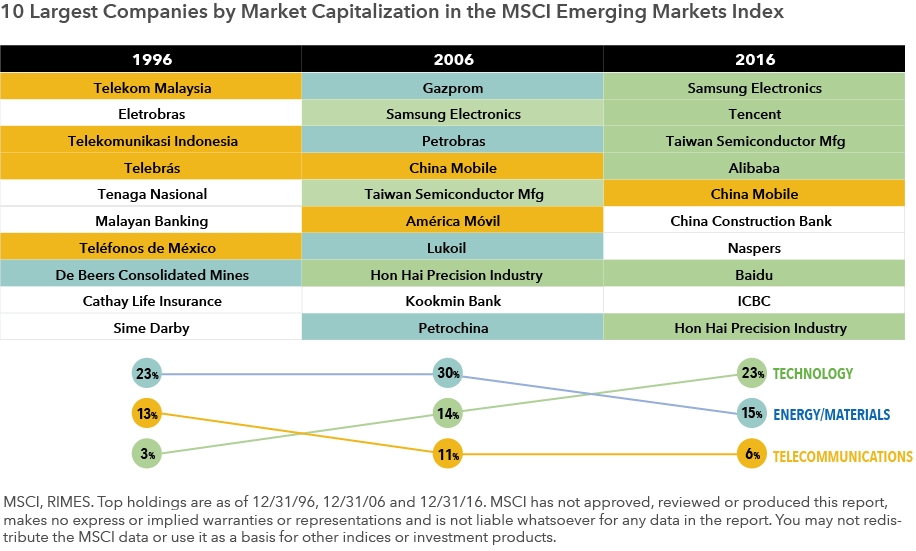 Future consumption trends could well be driven by emerging markets — most of the world’s 2 billion millennials (those born from 1980 to 2000) live in these countries.


“During the next 10 years, developing countries are expected to add a billion people to the middle class and above,” says Noriko Chen, a portfolio manager at Capital Group. “These emerging economies will account for nearly half of total global consumption. I believe it is going to have a transformational impact on the world’s economy.”