As the Federal Reserve meets on September 20 and 21, the central bank’s dual mandate should be kept in mind. Its two goals are full employment and stable prices. With unemployment at 4.9% in August, around the level many economists consider optimal, market attention has turned to inflation.


Over the past two years, annual Consumer Price Index (CPI) growth — the main inflation gauge in the United States — has averaged a mere 0.5%. That’s far lower than the Fed’s inflation target of 2%.


The headline inflation number in the U.S. has been driven mostly by the drop in energy prices, as the energy components of CPI have fallen roughly 13% since July 2014. When we strip out food and energy, though, we can see that core U.S. inflation has been running at 2% over the past two years.


Due to the low realized inflation we’ve experienced recently, the Treasury Inflation-Protected Securities (TIPS) market has lowered its expectations for inflation. The 10-year TIPS “breakeven” rate (the amount of inflation needed over a period of time to be indifferent between owning nominal U.S. Treasuries and TIPS) has moved from 2.2% to 1.5% since the summer of 2014. It’s quite interesting that expectations for the future have moved so much as a reaction to the low realized inflation of the past couple of years.


I do not believe this move is warranted. Core inflation over the past 12 months is 2.2% through July. This year, we reached our highest annual core inflation rate since 2008. I believe there are several signs that core inflation will continue to move higher. These include: 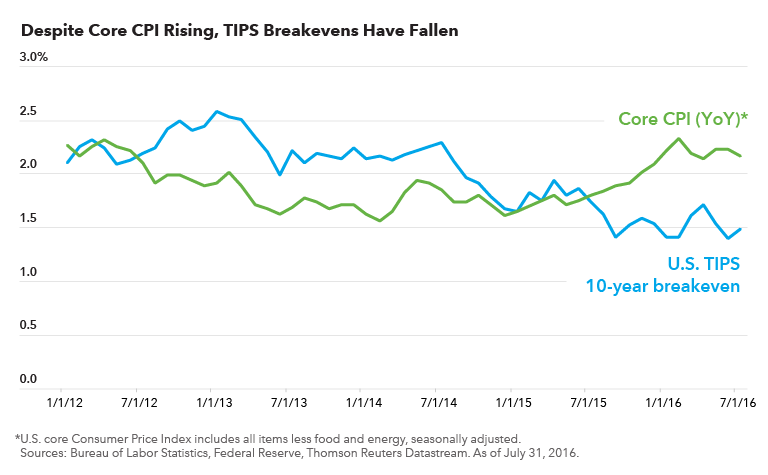 
We find TIPS to be an attractive investment for three reasons:  energy is no longer acting as a drag on headline inflation, core inflation prospects look positive and the TIPS market seemingly still looks mispriced. We think the 1.5% inflation hurdle is easily beatable given what we currently know about inflation. If inflation rises to extremely high levels, bondholders will significantly benefit.


However, even with the small chance that we see deflation, bondholders’ losses are limited. That’s because the U.S. Treasury guarantees par back at maturity of all TIPS. This is another feature that makes this investment attractive.