Tim Armour weighs in on indexing 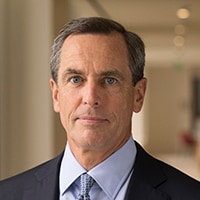 The idea that investment managers can’t beat the index has become something of a truism within investing circles. A leading proponent of that view has been legendary investor Warren Buffett. In his 2018 letter to Berkshire Hathaway shareholders, he continues to advocate low-fee indexing as the best approach for most individual investors. Here, Tim Armour, chairman and chief executive officer of Capital Group, home of American Funds, discusses Mr. Buffett’s views and adds his perspective to the indexing discussion.


What are your thoughts on Warren Buffett’s recent comments that seem to endorse index investing?


First off, it’s impossible to be an investor and not have tremendous respect for Warren Buffett and his track record. As an investor myself and someone who leads an investment management organization, I have a special appreciation for just how difficult it is to do what he’s done. And his company building on its success in 2017 is a testament to that fact.


However, to suggest that everyday investors cannot hope to outpace the index is to overlook the fact that American Funds' equity-focused funds have done just that — on a pretty consistent basis — for many decades.


Mr. Buffett’s approach at Berkshire Hathaway has many similarities to how we at Capital Group have built the superior track record1 of the American Funds ― bottom-up investing, rigorous analysis and building durable portfolios. This research-driven, long-term, buy-and-hold approach has meant lower portfolio turnover and a superior long-term track record.

Mr. Buffett is not the only indexing proponent. Why do you think this view is so prevalent?


It’s important to say that we don’t dispute the data that has led Mr. Buffett and others to form their views. We agree that the average investment manager does not outpace the market over meaningful time horizons. However, a fairly simple fact has gotten lost in the debate: Not all investment managers are average. As we like to say, “Just because the average person can’t dunk a basketball doesn’t mean that no one can dunk a basketball.”


Indeed, notwithstanding his stance on indexing, Mr. Buffett and others acknowledge that there are exceptions. We are one of them. Selecting a manager whose track record has demonstrated the ability to deliver better outcomes can make a very meaningful difference in an investor’s life. The difference between the market average and returns that are even 1 percent better over the long term can mean a much larger nest egg for a retirement that could last decades.


How does an investor find above-average funds?


Extensive research dispels the common myth that it’s impossible for an investment manager to beat the index. Among the tools for identifying these funds are two straightforward screening criteria.


The first is expenses. Selecting low-cost funds can significantly increase your success rate. Second, funds with managers who have “skin in the game” ― those who invest in the funds they manage ― have tended to do better over various time frames.


Using these simple screens identifies a select group of funds that have, on average, consistently outpaced benchmark indexes. This can help increase the probability of identifying some funds and screening out the rest.


Given what’s happening in markets today, does being able to identify funds that meet these screens take on added importance?


The recent return of volatility to the market has shown us the flipside of the indexing coin — namely, that while index funds allow an investor to participate in rising markets, they provide no buffer against down markets; index fund investors are guaranteed to fall as far as the market does. Despite the trillions of dollars that have flowed into them, only about half of investors we surveyed were aware that index funds expose them to 100% of the volatility and losses during market downturns, according to our recent “Wisdom of Experience” survey. And doing better than the crowd in bad times is critical for investors seeking to grow their nest egg over the long term. Actively managed investments like the American Funds offer the potential to lose less than index-tracking investments during market declines.


What’s your view on the value of professional advice?


Capital Group has long believed in the value a financial advisor can bring to investors, helping them pursue their long-term investment goals. We believe advisors help motivate people to save and, perhaps most importantly, they can serve as a steadying hand during volatile times when human nature often drives investors to make decisions that wind up being counterproductive.


In fact, in his most recent letter to shareholders, Mr. Buffet observed that investors' minds may well become rattled by scary headlines and breathless commentary, and an unsettled mind will not make good decisions. We agree and believe an advisor can truly add value in those circumstances. We likewise agree with Mr. Buffett that Americans need to save more and stay invested, and advisors play a pivotal role in helping people do both of those things.


The question of how advisory services are delivered and paid for is a different one. The good news is that people have more choices than ever in terms of how they seek and pay for advice.


Tim Armour is chairman and CEO of Capital Group, as well as an equity portfolio manager. He has 37 years of investment experience, all at Capital. He holds a bachelor's in economics from Middlebury College.