U.S. stocks would seem to be expensive. Markets are at historic highs. Investors are currently paying more than 21 times what companies in the Standard & Poor’s 500 have earned over the past 12 months, according to operating earnings from S&P Dow Jones Indices. Investors are paying well above the 18.8 average multiple they’ve paid for stocks since 1988, S&P data shows.


Don’t take this as a signal to sell, though, says Darrell Spence, an economist at Capital Group. Reading too much into this one data point could cause long-term investors to miss out on future gains. “It could be possible for the S&P 500 to post an increase in 2017, despite the full starting valuation,” he says.


Here are four reasons why long-term investors should look beyond the price-to-earnings ratio:


Just because the market’s price-to-earnings ratio is high doesn’t mean stocks must fall. Several bull markets had plenty of life left even when the P/E ratio topped 20. You don’t have to go back far to find an example. The S&P 500’s P/E ratio has been above 20 since the end of the fourth quarter of 2015. But since then, stocks have added more than 10% as investors priced in better corporate profit growth. Even in the third quarter of 1992, the market might have seemed richly priced with a P/E of 21. But that was just the beginning of a major bull run that propelled stocks 157% higher, including dividends, in the following five years. 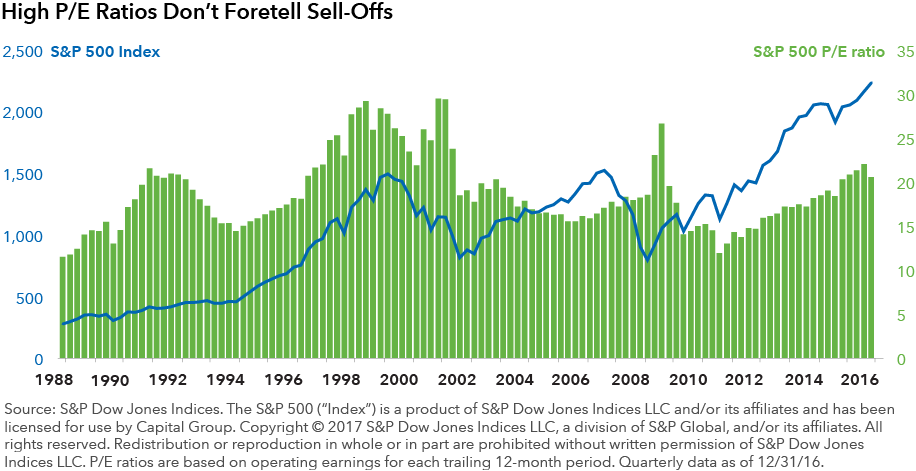 2. P/E ratios must be put into context.


When interest rates are low and the economy is healthy, investors can justify paying higher valuations for stocks, according to Spence. Companies’ future earnings are more valuable when rates are low. There’s little evidence rates are about to move higher soon, given the aggressive moves the U.S. central bank undertook to buy Treasuries, he says.


3. Companies can “grow into” valuations.


Market prices are only one part of the math that determines stock valuations. Corporate profits are the other. If earnings growth resumes, as Spence expects it will in 2017, stocks can justify their current valuations and then some. S&P 500 companies could boost their operating earnings per share this year by 13%, he forecasts. At current prices, if earnings grew 13% in 2017, stocks would be trading at 18.6 times trailing earnings.


Higher valuations can be justified by a number of factors. Economic activity in the U.S., for instance, is improving. Risks of economic distress are low and the new presidential administration is promising stimulative fiscal spending on infrastructure projects, not to mention tax cuts.


But perhaps most importantly, the Federal Reserve has been slow to increase interest rates while other central banks around the world are still working to keep their interest rates low to stoke economies. Low bond rates translate into higher P/E ratios when the economy is healthy, Spence says.


There are risks. A sharp rise in interest rates could change the math and make stocks suddenly look more expensive. A change in direction by the world’s central banks to take away the monetary stimulus could also make stocks more pricey. A strong U.S. dollar could also hurt U.S. companies’ exports.


So despite valuations that would appear stretched, there’s still opportunity in the market. Investors might have to just mute their expectations. What’s reasonable? Add the economy’s hypothetical growth of 2.5% to the expected inflation rate of 2.5% and the S&P 500’s dividend yield of 2%, and that could correspond to a 7% expected total return for U.S. stocks.


“Is the P/E ratio a perfect indicator of the future? The answer is no,” Spence says.  “But higher valuations still appear sustainable.”