As political uncertainty fades, are european equities poised to break out?


French voters did far more than elect a new president on Sunday. They may have single-handedly restored European Union stability and set the euro zone on a decidedly more stable course, based on the reaction from investors.


Centrist candidate Emmanuel Macron’s victory over anti-EU candidate Marine Le Pen lifts a political cloud that had been hanging over the future of Europe, particularly since last summer’s Brexit vote placed the U.K. on a treacherous path out of the 28-nation European Union. With France now solidly anchored to the EU and the euro-area common currency, many investors are optimistic about the outlook for European markets for the first time in a long time. On a year-to-date basis, European stocks are up 15% in U.S. dollar terms and 10% in local currency, as of May 5.


“My view is, this election is a pivot point – a true catalyst – that will position Europe, certainly in the near term, as a more attractive place to invest,” says Andrew Suzman, an equity portfolio manager with Capital Group. “To be clear, challenges remain in Europe, and this election will not solve all problems, but valuations are in many cases very low, and a major political and economic disruption has been avoided.”


The French election result is adding to an impressive list of tailwinds gathering in support of European markets. They include signs of improving economic growth, attractive equity valuations compared to other developed markets, and a gradually depreciating U.S. dollar. The dollar’s sharp rise since 2014 has hurt European-asset returns for dollar-based investors. 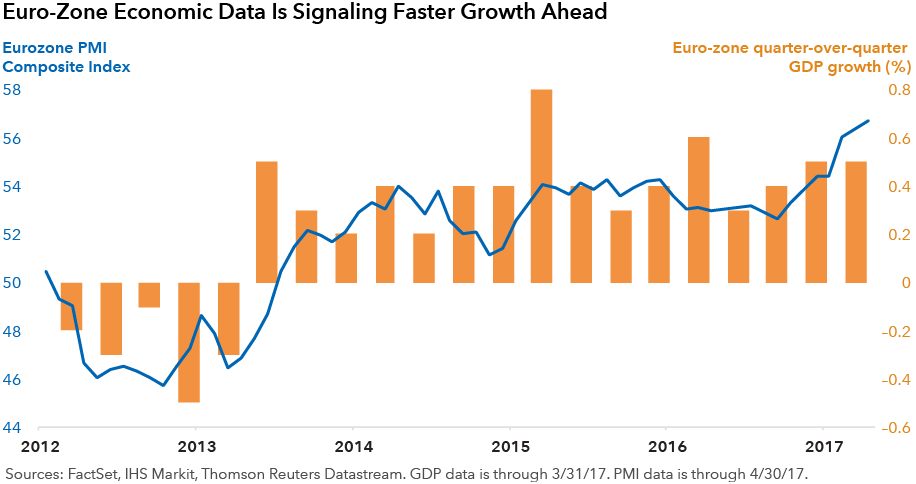 Heading into Sunday’s election, markets were already anticipating a favorable outcome. French equities rose 3% in April, compared to a 1.5% gain for the MSCI World Index. In the first four months of the year, the MSCI Europe Index rose nearly 8% in local-currency terms and more than 11% in dollar terms. On Sunday, Macron won the second round of France’s two-round presidential election, gaining 66% of the vote to Le Pen’s 34%.


The euro rose to a five-month high against the dollar in late April as Macron soared far ahead of Le Pen in the polls. As the leader of the far-right National Front party, Le Pen had pledged to take France out of the EU, revive the franc as the national currency, and impose strict limitations on immigration. Macron, meanwhile, is a centrist, pro-EU advocate who has pledged to bring economic and political reforms to France while working cooperatively with Brussels and Berlin.


“Europe will welcome President Macron, and Germany is positively disposed to work with him,” says Talha Khan, a political economist in Capital Group’s London office. “Macron’s election will help reset the Franco-German relationship, which is at the heart of the EU. In a sense, Europe is Macron’s biggest opportunity. If he can convince Germany to do more to solve the economic imbalances in lieu of France’s commitment to reform, it will be very positive for the long-term outlook on the European economy.”

“Fading political uncertainty has finally enabled investors to concentrate on what’s important: the underlying fundamentals,” Lind says. “Companies in the euro zone are seeing a significant improvement in earnings growth, which reflects a stronger macroeconomic environment. After a protracted period of underperformance, there is scope for further relative gains in euro-zone stocks.”


Still, many of France’s largest publicly traded companies long ago learned not to rely on the sluggish French economy to act as a tailwind. Companies such as Airbus, L’Oréal, LVMH, Sanofi and Total are global enterprises that look to the U.S. and Asia, in addition to western and eastern Europe, for earnings growth opportunities, Lind notes.


Bond investors should also feel the impact of Macron’s victory as the yield spread narrows between French and German government bonds. French yields had widened significantly in the weeks ahead of the French election, reflecting fears that France might abandon the euro. Post-election, some investors now expect the European Central Bank to begin reducing its economic stimulus program later this year, or early next, and perhaps consider raising interest rates in 2018.


“The next 10 years will potentially be known in the history books as something like the ‘European revival period,’” says Thomas Høgh, a fixed income portfolio manager at Capital Group. “Under what I consider reasonable assumptions, the EU should remain together and develop further towards a federalist system of government. The appeal of populist parties should diminish as unemployment rates come down and the fruits of economic reforms begin to show up.” 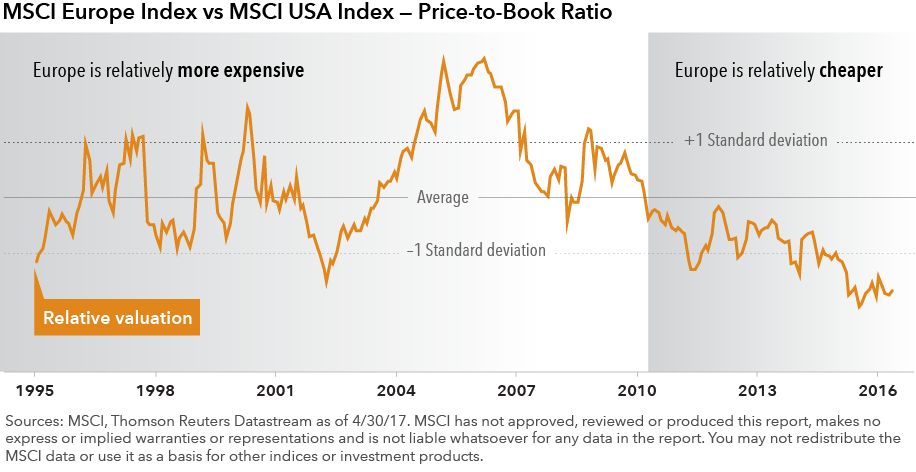 In the meantime, there is reason to believe that the multiyear underperformance of European equities versus U.S. stocks could be nearing an inflection point, notes Marc Nabi, an investment specialist at Capital Group. Many U.S. companies are trading at a premium to European companies in the same industry. There are several factors driving this trend, but the valuation and return differentials should eventually normalize, as experienced in prior investment cycles, Nabi explains. A depreciating U.S. dollar will also help, he notes.


Valuation and currency trends indicate the time may be sooner rather than later to consider investing outside of the United States. Here is a look at six American Funds that have significant investments in non-U.S. domiciled companies: