A $57 trillion bill for infrastructure is coming due
May 24, 2017
KEY TAKEAWAYS

Urbanization is nothing new. It’s been going on for centuries, and it helped make Europe and the United States global economic and political powers. But what is different about today’s wave of urbanization is its unprecedented speed and scale — it’s bigger and faster than ever.


In fact, at the current pace of urbanization, the world’s cities will add 65 million inhabitants a year between now and 2025, according to researchers at the McKinsey Global Institute. The resulting demand for infrastructure will mean that each year, India alone will need to add as much floor space as exists in all of Chicago — and China more than twice that. Around the world, McKinsey estimates $57 trillion needs to be spent by 2030 on infrastructure just to keep pace with economic growth.


History has shown that migration to cities lifts the incomes of individuals, the wealth of nations and the global economy. By 2025, urban consumers are likely to inject about $20 trillion a year in additional spending into the world economy.


“We are quite simply witnessing the biggest economic transformation the world has ever seen as the populations of cities in emerging markets expand and enjoy rising incomes — producing a game-changing new wave of consumers with considerable spending power,” according to McKinsey’s report, Urban World: Cities and the Rise of the Consuming Class. 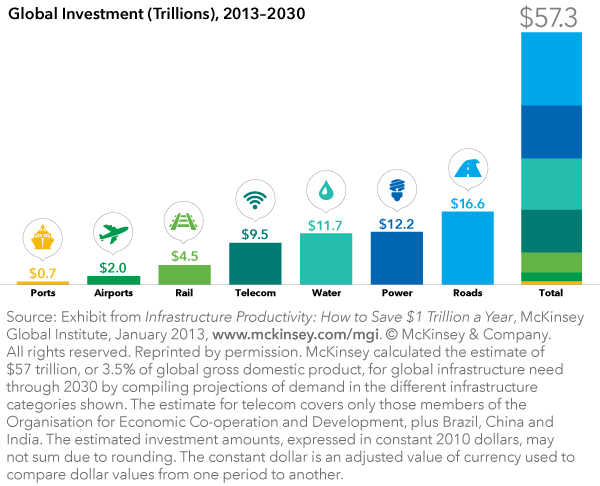 Many countries need infrastructure that simply meets basic human needs, such as safe drinking water. Others may want to modernize their transportation networks, and some may be trying to lay the groundwork for future global competitiveness by building a national broadband network. Roads and power account for about half of projected spending.


Indeed, building and repairing roads and power grids are the two areas with the greatest need for new investment, followed by water provision and telecom networks. Much of the money needs to be spent in developing countries. In many African countries, for example, massive investments are required to improve the transportation system, bring electricity to rural areas and provide access to water sources that are protected from external contamination. The infrastructure needs in Africa are especially daunting.


There are, of course, many countries with multibillion-dollar projects underway. Perhaps the most ambitious are in China, where such megaprojects include the world’s largest bridge and the longest underwater tunnel. The bill for such projects can be high. But without the necessary infrastructure, economies struggle to meet their full economic and human potential.


“What I think we will see — and this is one of the positive structural outlooks for China — is that probably 10-15 million people, at least, every year will be moving into cities. So that’s a pretty meaningful demand-construction outlook,” says Andrew Dougherty, a research director at Capital Group.