Five technology trends to watch in a post-COVID world

1) Subscription model is becoming the norm as cloud computing spreads

Cloud computing has become increasingly widespread in recent years. One of the byproducts of the shift to the cloud is that software has matured from a one-size-fits-all product released in cycles, into a cloud-based, customized, continuously evolving set of solutions that companies monetize through subscription-based models. That has allowed developers to design products that are a better fit for clients, build a stable subscriber base, and increase efficiency and productivity. For the software providers, this translates into a recurring revenue stream that is more stable than the lumpiness of capital expenditure cycles that happened every few years.

The fastest growing form of cloud computing is Infrastructure as a Service (IaaS), which refers to cloud-based resources that help establishments build and manage servers, networks, operating systems and data storage. The popularity of IaaS stems from organizations’ ability to administer their software requirements and infrastructure as they expand. Better yet, it allows companies to manage their hardware needs without hosting any of the infrastructure. The largest providers of cloud computing — Amazon’s Amazon Web Services (AWS), Microsoft’s Azure, and Google’s Cloud Platform — are well-known. Cloud computing was not the core business of any of these three firms, but their growth in this area has been hugely accretive to their stock price and is likely to remain a growth driver.

The other rapidly growing area is Software as a Service (SaaS). SaaS denotes cloud-based software that is hosted online by a software provider, is available for purchase via a subscription-based model and delivered through the internet. SaaS is the most common cloud service and is often accessible through convenient online platforms that allow employees and companies easy access to productivity-enhancing tools.

Meanwhile, Adobe, an industry leader in digital marketing solutions through its Creative Cloud, is another interesting case study on the evolution of Software as a Service. The company was able to reduce the cyclicality of its revenues (previously tied to volatile marketing budgets) by adopting a subscription/cloud model for its creative software services such as Photoshop and Illustrator. And what Adobe is for creative, Autodesk is for architecture, construction and industrial design firms. Autodesk’s transition to a subscription model could benefit the firm in the long term, as it continues to provide software solutions for the industries it serves. 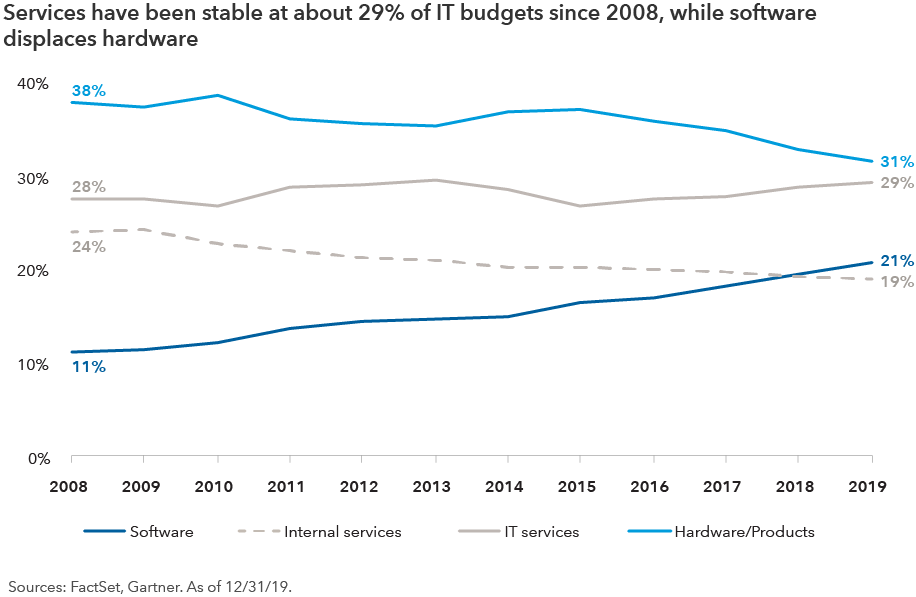 In the human resources and payroll space, Workday is changing how HR and human capital are managed within an enterprise through cloud-based software solutions for finances, payroll, time management and recruiting. Companies like RingCentral provide cloud-based communication services, allowing enterprises to move all their voice and video interactions onto one digital platform.

Fintech and e-commerce are other areas ripe for cloud computing — a trend that has benefited Shopify. The company provides tools to create e-commerce stores with services for everything from website design, marketing and shipping, as well as payment processing and merchant solutions. This allows even the smallest of sellers to move their businesses online and possibly thrive in the era of physical distancing.

2) Digitization of entertainment: Streaming and gaming lead the way

Online entertainment, demand for which accelerated amid the global COVID-19 lockdowns, is expected to remain high as viewer habits become more permanent. Netflix added more than 26 million new subscribers in the first half of 2020, bringing the global total to over 193 million. The firm also spent more than US$15 billion on content in 2019, placing it third among studios/streaming providers. A projected growth rate of more than 10% in spending in 2020 (likely delayed due to COVID-19) means that the company may grow its lead over many streaming and traditional rivals in terms of original content. Looking at China as a guide to future trends, daily users specific to Tencent declined as people returned to work. Interestingly, however, time spent on gaming has remained higher than levels seen before COVID-19 struck. People who became more financially and emotionally invested in their gaming during the pandemic-related lockdown have continued playing even as physically experiential activities opened back up. There’s also a social element to the games, particularly on mobile devices, that has added to their lasting attractiveness — in and beyond the lockdown period.

Gaming remains one of the least expensive forms of consumer entertainment, with significant potential to capture a greater share of discretionary spending. Moreover, several analysts anticipate that the shift to digital entertainment may improve content holder profitability. However, cloud gaming — which provides access to any game, anywhere, on any device — has emerged as the next major platform in video games, and we continually assess which firms might be the beneficiaries of this shift.

Social distancing is accelerating the adoption of new technologies, especially in the service industries. Those that were early adopters have been better positioned to weather the periods of lockdown that began in March. A good example is tech-savvy Domino’s Pizza. It was an early adopter of digitization technologies such as app-based ordering, online tracking, user profiles and voice ordering. The pizza maker’s digital business has grown rapidly and now accounts for about 65% of its orders. The system has been attracting new users that the company can convert into loyalty members. Even traditional fast food companies such as McDonald’s are using delivery platforms such as UberEats and transitioning to an at-home delivery model in addition to their traditional drive-through and restaurant services.

Similarly, in grocery, a nearly US$700 billion-a-year industry in the United States, technology and e-commerce companies are changing the landscape through innovative product and service offerings. With Amazon’s purchase of Whole Foods in 2017 and subsequent expansion of grocery delivery to its massive installed base of more than 110 million U.S. Prime members, the e-commerce giant was better positioned for the surge in online grocery demand brought about by the pandemic. Amazon’s online grocery sales in the second quarter of 2020 tripled year over year. While the accelerated pace of the change is largely due to social distancing measures imposed in many cities and states earlier this year, the shift remains a positive trend for what has been one of the most stubbornly brick-and-mortar industries.

Britain’s Ocado also exemplifies innovation in the grocery industry. Originally an online grocery delivery service, Ocado has expanded its expertise in online retail software, robotics, and warehouse management to global partnerships expanding the online and delivery presence for some of the largest global retailers. This involves building specialized customer fulfillment centres based on the company’s automated technology for partners including Kroger in the U.S., Casino in France, and Aeon in Japan, among others. Having invested in technology over the past few years, Ocado was poised to benefit as consumers sped up their adoption of online grocery shopping. The company posted a 40% increase in sales year over year as of the end of May. It also has a waiting list of customers for service in its U.K. home market.

A good example of the expansion of technology in a traditionally low-tech industry is waste management. Route optimization software, automated trucks and robotics are being increasingly used to obtain greater operating and capital efficiencies. The waste industry was historically very low-tech — all you needed was a driver and a truck. Paper maps with routes drawn over them were commonly used. But in the last few years, technology has driven meaningful changes to firms’ operating models — lowering costs and increasing customer touchpoints as well as retaining and capturing incremental revenue.

Some examples of this technology implementation include:

5) Automation of factories and supply chains is on the rise

China has long been the predominant manufacturing base for the global economy. However, the combination of rising labour costs over the past decade, trade tensions with the U.S. and heightened travel restrictions due to the pandemic has led some multinationals to examine their supply chain concentration and seek ways to diversify.

As companies build new factories and upgrade existing ones, automation is likely to gain momentum. Japanese automation companies such as Keyence and SMC could be key beneficiaries of this trend, as both have global footprints, strong industry positions and plenty of cash on their balance sheets to help weather a prolonged downturn. Additionally, Keyence has diverse product offerings from sensors, to machine vision, to 3D printing, all of which may help power automation across many different industries. SMC’s global footprint could be an advantage as its customers look to build new factories to diversify their supply chains.

On a long-term basis, COVID-19 has widened the moat for many market leaders with scale, incumbent relationships and strong digital capabilities. But smaller specialized players (such as Zoom and Shopify) have gained prominence as demand for their services has increased. While the spread of COVID-19 has resulted in many companies putting the brakes on IT spending, it has also created a longer-term imperative for enterprises to accelerate their digital transformation efforts.

These transformations are occurring both inside and outside the technology sector. The key trends that we expect to gain momentum even as we return to a more normal post-COVID world are: 1. The shift to cloud computing; 2. The digitization of entertainment and the expansion of online gaming; 3. Adoption of new technologies in service industries; 4. Low-tech industries turning to technology solutions for logistics; and 5. the automation of factories as manufacturing diversifies outside of China.