When the chips are down: 4 reasons semiconductors remain attractive

After years of strong revenue growth and high demand for computer chips, the semiconductor industry today is reflecting its cyclical nature. Slowing global economic growth, international trade tensions and a maturing smartphone market are all contributing to a muted near-term outlook for chipmakers and designers.


The slowdown, which became evident in the second half of 2018, was entirely predictable. It followed two years of rapid growth driven by soaring demand from chip-hungry tech giants such as Amazon, Google, Facebook and Microsoft. However, this inevitable cool down isn’t cause for alarm, in my view.


Semiconductors lie at the heart of technological innovation and, given this, my long-term outlook for the industry remains highly optimistic. I think the current slowdown will be less severe than many industry observers are predicting, and moderate growth levels — somewhere in the mid-single digits — are likely to resume in the years ahead. 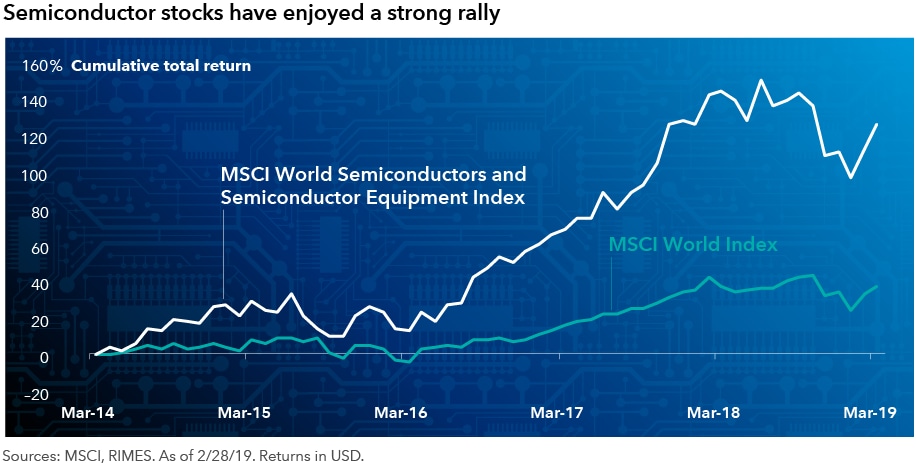 We are already seeing tentative signs of a reversal as semiconductor stocks have rallied following a rough fourth quarter. Just last week, Micron Technology reported that it expects memory chip prices to recover as demand picks up from data centers, where the shift to cloud computing remains a powerful trend.


Here are four reasons why the semiconductor industry remains an attractive hunting ground for investment opportunities, despite the volatility we’ve seen over the past few months:


While it’s true that demand from smartphone makers such as Apple and Samsung appears to be decelerating, other types of manufacturers are continuing to ramp up the technological prowess of their own products. For instance, the average automobile these days has more than 30 computer chips, and luxury vehicles often have more than 100. In the medical device industry, adoption has been slower due to regulatory factors, but the growth potential is substantial, particularly in the field of robotic surgery.


Internet-connected consumer products are also becoming ubiquitous. At the touch of a button, Android and iPhone handsets can now control everything from home security systems to backyard sprinklers. Refrigerators can automatically order food via online delivery services before you’ve even realized you’re out of milk. All of these products require smaller and more specialized computer chips to get the job done. The “Internet of Things” is a trend that should accelerate in the years ahead.


The move toward 5G, or fifth generation, cellular connectivity — which is happening as you read this — may feel like an evolutionary shift at first but, in my view, it will lead to revolutionary technological advances. The limits of 4G, primarily latency due to slower speeds, will be largely eliminated. Devices will be able to “talk” to each other almost instantaneously.


Once 5G becomes widely available in the next few years, it will open up new business models that didn’t previously exist due to technological limitations. It will also boost the current technology giants as internet search, social media and e-commerce become more ingrained in our daily lives. Artificial intelligence applications and virtual reality devices will proliferate in this environment — and will require advanced chips to power innovation.


The semiconductor industry — which includes chipmakers, designers, manufacturers and chip-equipment makers — is a standard-bearer for globalization. As such, it recently has experienced the same consolidation pressures as many other highly competitive, global industries. Mergers and acquisitions have reshaped the industry, highlighted by Avago’s $37 billion megamerger with Broadcom.


In 2003, for example, there were 25 manufacturers of logic chips. Today, following a wave of M&A activity and some timely exits, the business is dominated by three companies: U.S. giant Intel, South Korea’s Samsung and Taiwan Semiconductor. In some parts of the industry, there is only one supplier, such as Dutch chip-equipment maker ASML. Used to produce the most advanced chips in the world, ASML’s extreme ultraviolet lithography machines cost upwards of $100 million.


This consolidation trend has helped to shore up profitability and position the remaining companies for a more favorable competitive environment in the years ahead.


Yes, the semiconductor industry is maturing. The days of supercharged growth are giving way to moderate and even slow growth at times. But the industry’s technological and financial impact continues to loom large. In 2018, semiconductor companies generated global sales of $468.8 billion, a 13.7% increase over the previous year, according to the Semiconductor Industry Association. The market slowed appreciably in the second half of 2018, but it was still a record sales year.


Semiconductors continue to power the technology-based resurgence that has characterized the post-financial crisis period. I see strong tailwinds for this industry, particularly with the advent of 5G and the ever-growing roster of connected devices in the world, both of which should bode well for investors with the patience to take a long-term view.