“Can I retire now?” used to be something you’d expect a 55-year-old to ask. But now, young, high net worth clients — in their 40s or even younger — might pose the question to you. Simply saying “no” isn’t an acceptable answer.


Here’s the challenge: Assumptions used in traditional retirement plans don’t apply to “extreme early retirement” — where clients may want to retire in their early 40s or even sooner — Capital Group research suggests. Your 40-year-old clients may think they can retire now if they invest 25 times their annual spending, which correlates to the commonly cited “4% withdrawal” rule. Our research, though, suggests the needed number is closer to 36 times annual spending. The difference is profound.1


The ramifications of our research reach far beyond 40-year-olds looking to hang it up early. Most people are likely to need considerably more than they thought for a secure retirement. The analysis also calls into question assumptions used in retirement planning, including the oft-quoted “4% withdrawal rule.”

Source: Capital Group based on 95% certainty of not running out of money before age 95.


Why clients think they can retire at 40

Typical retirement math can be dangerous for clients who want to call it quits extremely early. In simple terms, the math only works if a series of historic assumptions hold true. The 25-times rule is the mathematical inverse to the idea a retiree can withdraw 4% of a portfolio’s original value per year and be reasonably sure they won’t run out of money. This analysis is derived from historical simulations in a seminal research paper titled “Determining Withdrawal Rates Using Historical Data” by William Bengen. For a 39-year-old worker who requires $100,000 a year to pay annual expenses, a nest egg of 25 times that, or $2.5 million, would be their number before taxes and assuming 3% annual inflation.


Saving 25 times annual spending would be an onerous task for most 40-year-olds, but a combination of a high income, inheritance or frugal living could make it doable.

Our analysis, though, shows traditional assumptions don’t hold up over substantially longer periods — the odds a 40-year-old retiree would face a negative expense or market event are that much greater. By our tally, our 40-year-old client looking for $100,000 in annual income would need a starting investment of $3.6 million going into retirement to be reasonably confident, subject to certain assumptions, they won’t run out of money — or over 40% more than traditional assumptions would imply. Keep in mind, too, the sum needed would be after-tax dollars, which needs to be factored in if some of the money is saved in a pre-tax retirement vehicle such as a 401(k).


Why does our conclusion differ so much from the commonly held rules of thumb? Traditional retirement planning severely underestimates three main risks we’ve adjusted for:


The original 4% withdrawal rule was based on the assumption of a 30-year retirement. But that math must be reworked for clients adding 25 years of retirement to support.


Rocky returns, especially early in a lengthy retirement plan, can be devastating. “If you don’t account for [poor returns early in retirement] you could find a bad run, especially in your 40s, could leave you way short of what you’ll need to get to age 95,” says Brett Hammond, Client Analytics Research Leader at Capital Group.


To adjust for this risk, we looked at a Monte Carlo analysis simulating 10,000 possible market scenarios of a portfolio comprised of 60% large U.S. equities and 40% intermediate blended bonds over retirements of various lengths.1 We used this to estimate the savings required to have 95% confidence of having an ending value greater than $0 in the final year of simulation before age 95.


2. Market returns going forward could be lackluster compared with past results.


Some investment professionals expect future returns to be lower than they’ve been in the past since interest rates and economic growth rates are also below what they have been historically. “Instead of 4%, if there’s a new normal, the withdrawal rate is less than that,” says Sunder Ramkumar, senior vice president of Capital’s Client Analytics group. This risk is more significant the earlier a client retires, Ramkumar says, since investment returns become that much more important.

Data for 1871-1961 represents average monthly U.S. long-term government bond yields compiled by Robert Shiller. Data for 1962-2016 represents 10-year Treasury yields as of December 31 each year within the period.
Data for 2017 is as of March 31.


To adjust for those lower forward expected returns, we used an investment advisor survey of long-term market returns estimates conducted by Horizon Actuarial Services. These estimates point to an average annual market return of 7.59% from U.S. large equities, well below the more than 9% historical average annual return of the market.


A client who quits work at 40 years old faces 55 years at risk of an unexpectedly large emergency cost — think a major health issue or a significant home repair. This is a real concern: 38% of retirees experienced a spending shock of 25% or more during retirement, according to a study of 733 retirees in August 2015 by the Society of Actuaries.


To adjust for these costs, we factored in a 20% unexpected hit to a client’s portfolio at age 75. The results are notable.

Putting these three factors together creates a more realistic forecast, like the one in the chart below. This shows you what your 40-year-old client is looking at in savings and investing needs — and how the three adjustment factors affect their plans.1


Some 40-year-olds might think they’re willing to take a bit more risk that their plan might fail by accepting a lower probability of success. They figure they can always return to the workforce. But even after adjusting the analysis to allow for greater chances of retirement plan failure, the numbers are still much more restrictive than traditional plans would suggest.


Going beyond the 40-year-old

It’s easy to discount the early retirement dreams of our 40-year-old — chalk it up to the delusions of youth. But our analysis has meaning for all retirees who want to prepare for realistic retirement expectations — no matter their age. While commonly cited as safe, 4% withdrawal rates may be overly optimistic even for clients who retire at more traditional ages.


Below is a table showing the safe withdrawal rate for clients based on their age, all adjusted for the three factors. Interestingly, a 4% withdrawal rate is aggressive even for a 65-year-old using more conservative future market returns data and factoring in unexpected financial hits. 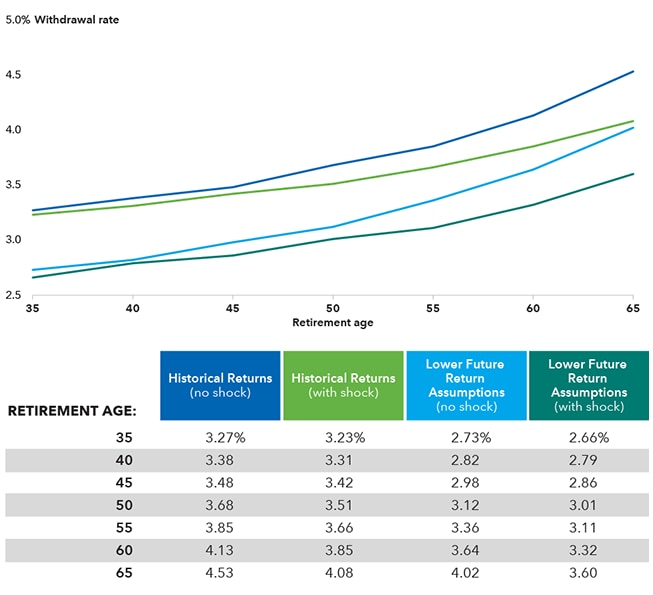 
The table below shows what that means in terms of savings requirements at retirement.


Certainly, there are important caveats in individual situations that require the sharp pencils of a financial planner. It’s possible that spending needs will fall as individual clients age and have their own set of circumstances.


But it would appear that many 40-year-olds who are counting on spending lots of extra time on the beach might want to remain in the workforce at least a bit longer.


1Analyses based on a Monte Carlo simulation, a statistical technique that provides a range of potential outcomes using a large number of scenarios based on capital market assumptions. The capital market assumptions used here are 9.34% for stock and 4.25% for bonds on a historical basis and 7.59% for stock and 4.48% for bonds on a forward basis, annualized. The allocation was rebalanced monthly. The results of the simulation are highly dependent on the assumptions used and there can be no assurance that these assumptions will prove to be accurate. Accordingly, actual results may vary significantly from the simulation results presented. Neither taxes nor fees were included in any of the scenarios. Accordingly, results would have been lower. Annual spending assumes $100,000 a year to pay annual expenses, adjusted for 3% annual inflation.

Investors should carefully consider investment objectives, risks, charges and expenses. This and other important information is contained in the fund , which can be obtained from a financial professional and should be read carefully before investing.

Model portfolios are provided to financial intermediaries who may or may not recommend them to clients. The portfolios consist of an allocation of funds for investors to consider and are not intended to be investment recommendations. The portfolios are asset allocations designed for individuals with different time horizons, investment objectives, and risk profiles. Allocations may change and may not achieve investment objectives. If a cash allocation is not reflected in a model, the intermediary may choose to add one. Capital Group does not have investment discretion or authority over investment allocations in client accounts. Rebalancing approaches may differ depending on where the account is held. Investors should talk to their financial professional for information on other investment alternatives that may be available. In making investment decisions, investors should consider their other assets, income, and investments. Visit capitalgroup.com for current allocations.