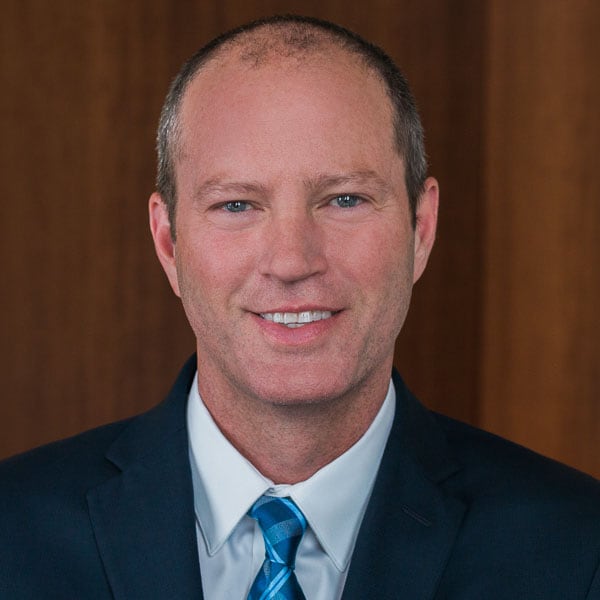 
Who are these investors that are hiding secrets?


We’re talking about the roughly one million households with $5 million or more in investable assets, according to the Federal Reserve, U.S. Census Bureau and Cerulli Associates. They’re mostly male, white and over 60 years old. About 40% operate their own businesses and earned their money themselves. Most are comfortable with money and many say they’re satisfied with their advisors.


To really understand high net worth investors, you must talk to them in their homes or favorite restaurants outside the confines of a survey or a “consultation” in an advisor’s office. That’s where the secrets come out. That’s what we’ve done. High net worth investors shared openly when I met with them individually in two to three-hour meetings. I visited them in their homes and over lunch for research interviews in San Diego, Los Angeles, Chicago, St. Louis, Austin and Denver.


What they told us — their secrets — were surprising and have potentially profound takeaways for advisors who serve these clients or hope to. Most of the secrets investors keep fall into three categories, including: 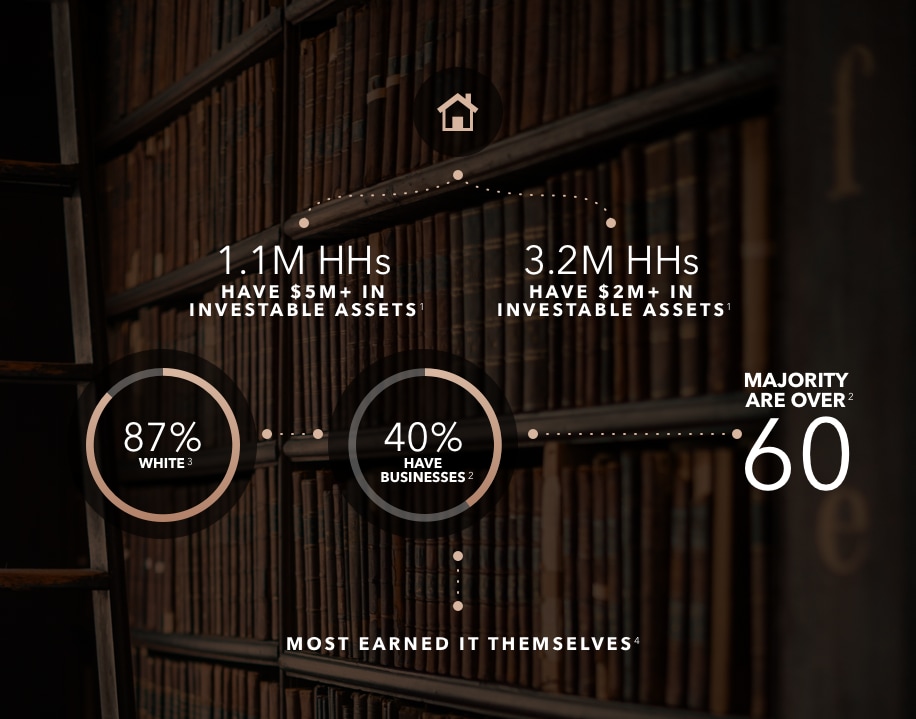 Successful and effective people surround themselves with people they view as competent. They bring that same team building approach to their relationship with you. But they constantly — and usually secretly — evaluate if you’re doing what they think is a good job. Sometimes the most important metric to them is something you could never have predicted because it is personal to them and builds in importance over time.


Consider this actual example. A 35-year-old investor who I met in San Diego is worth $2 million and personified this tendency to quietly size-up an advisor. In her portfolio was a relatively small position in shares of the company her father used to work for. The holding was a small percentage of the portfolio, but held an emotional attachment to her family. Her father, separately, owned the stock and had decided to sell the shares he held in his retirement plan, viewing it as overvalued.


Without saying anything to her advisor, this client fixated on this stock and watched as it declined in value. She assumed the advisor monitored the stock and held it for a reason. How could her high-powered advisor hold this stock even as her father, not in the financial industry, knew to sell? As months passed, she didn’t ask the advisor about the stock because she trusted the advisor and thought it wasn’t important enough to ask about. But over time, this one security took on more significance, and blew up into a relationship crisis when the stock continued to decline. Her conclusion: the advisor didn’t value her enough as a client to track her portfolio closely.


How to deal with it


Getting at this secret takes patience and probing personal questions — in person.


In-person meetings are a way to see if you’re being tested. It takes some probing, but we found the question that pulled the secret test out was “What does success in our relationship look like to you?” You’ve probably asked the question before, but it’s worth coming back to it regularly. Most clients will probably at first rattle off blanket statements like aiming for a 7% average annual return or wanting to leave a sizable estate.


But you need to realize how tightly these secret tests can be held. Ask, “How do you know if I’m doing my job well?” or “Can you think of times in the past two years where you wondered about choices I made?” We’ve found once the client says, “The frustration I’ve had is,” you’ve finally uncorked the secret test. Listen, pay attention to body language and avoid making judgments. Here’s a response that works, “What I think I am hearing you say is that…”


Many advisors squirm a bit asking questions like these because they’re opening themselves up to scrutiny, which no one likes. But it beats losing a client who thinks you’re failing at your job, which you had no idea.


Secret #2: Staying in the game

Discipline and self-determination helped many high net worth investors build their wealth. Don’t expect all of them to be willing to transfer their focus completely away from building their finances once they retire.


We’ve found that many successful businesspeople are concerned they are losing their sharpness as they step back from the pressures of daily decision-making. They want to know they still “have it” in terms of mental sharpness and business acumen. But in retirement, they do this by experimenting with different financial concepts and investments. They do this independently because the point is to test themselves.


One case study really shows this. A 60-year-old divorced executive I met in Austin was Type A and money-focused in all aspects of his life. He even referred to his former spouse as a financial sled he had to drag through life. His biggest fear was he’d lose his mental sharpness. So it wasn’t all that surprising to find that he felt the need stay in the game. He looked at managing a piece of his portfolio as a way to prove to himself he was still mentally top notch. It was an outlet for him. His advisor had no idea the client saw managing his own money as a personal test.


How to deal with it

When you talk to your client about their portfolio, listen for cues they think they can do it better and have a passion to try. There’s a good chance your high net worth advisors fall into this category. Upwards of 60% of assets on direct platforms are from high net worth clients. One tip-off might be if they mention individual stocks or mutual funds that are not in your model portfolios.


If you notice clients are interested in making some investment decisions, don’t snuff it out. Offer to help them, in other words, be a coach, not a competitor. Some advisors are comfortable helping their clients set up a brokerage account and showing them how to properly measure returns and risk.

It’s not going to surprise you to hear this, but your high net worth clients are probably seeing other advisors. This isn’t a commentary on your skills, but rather a byproduct of clients with long histories of investing and probably many career decisions. You might be the primary advisor, but your client might also have a long-standing relationship with another advisor. They just want to avoid the unpleasantness of dismissing them.


About a third of HNW investors use more than one advisor. This is slightly higher when you add in investment accounts that are not disclosed to their primary financial advisor. 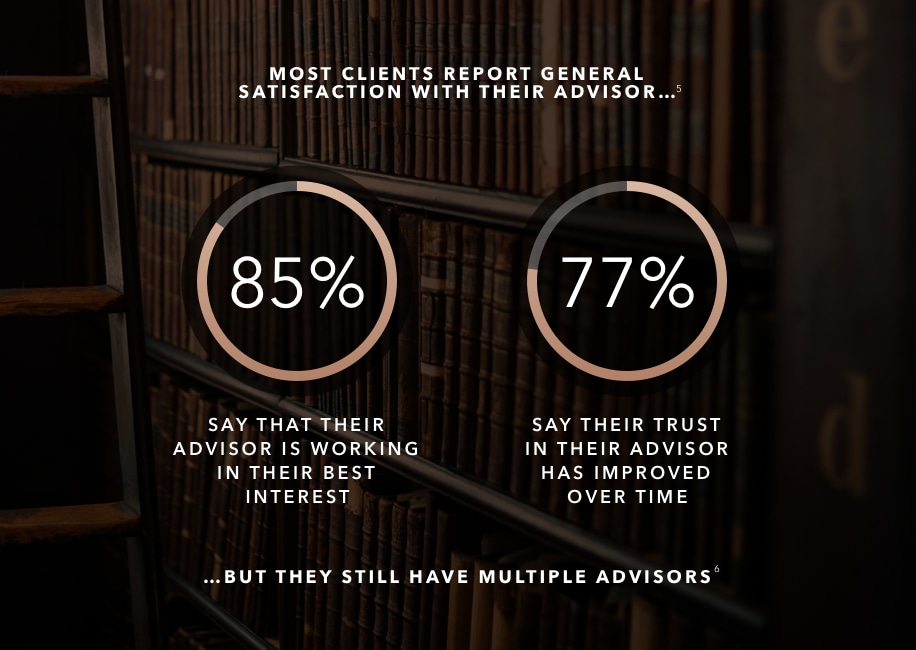 
While not a problem per se, the fact your client has accounts with other advisors hampers some of your ability to serve them and dilutes the assets that you should be managing. A client, for instance, might have large retirement accounts elsewhere, so your suggestions for tax planning might be made with incomplete information.

How to deal with it

It’s time for you and your client to acknowledge that a shared wallet is not in their best interests. Knowing what to say about this to your client, and when, is important.


The right time to have the conversation is when your client has a life change, including a new job, relationship or buying or selling a home, it’s time to ask questions. It’s at these times that investors are 13 times more likely to move money, McKinsey says.


How should you do this? Make it easy for them. The main barrier is the emotional awkwardness of ending the relationship with the other advisor and the effort of moving the money. Your success will be directly correlated to how easy you can make this for them.


Ultimately, unearthing these three secrets may be worth the effort. You’ll forge stronger trust and build honest, long-lasting relationships.


Mike Van Wyk is a senior market research manager at Capital Group, home of American Funds. He has 23 years of industry experience and has been with Capital Group for four years (as of 12/31/2019). Prior to joining Capital, Mike was director of global strategy development and advanced research methods at Procter & Gamble. He holds an MBA from the University of Texas at Austin and a bachelor's degree in horticulture from Michigan State University. Mike is based in Los Angeles.