Growth investing in a low growth environment: Q&A with a portfolio manager

Will we see a rotation among growth stocks at this stage of the economic cycle? We sat down with Don O’Neal, co-principal investment officer and portfolio manager for The Growth Fund of America®, to find out whether he’s bullish on U.S. stocks, what he thinks about technology disruption and what industries he’s excited about.


The Growth Fund of America is a U.S.-focused growth fund that takes a flexible approach to growth opportunities, seeking out classic growth stocks, cyclical stocks and turnaround situations.


What does the U.S. outlook look like with a new presidential administration?


On the policy front, lower taxes, fewer regulations and a little friendlier attitude toward business will probably result in a pickup in U.S. growth. In an era where interest rates have bottomed and will trend upward, we need growth to power equity returns.


But this pickup in growth doesn’t come without some risk and volatility — especially geopolitical risk and uncertainty regarding trade policy and negotiations.


Every five to seven years, there are a few stocks that become market leaders in the growth space and can drive outsized returns. In the period since the financial crisis, it’s been Amazon and Apple. As a manager, how do you think about that?


There’s no doubt that industry leaders can outpace growth stocks overall by a significant margin, especially in the technology area. Amazon and Apple are both companies that we have invested in significantly over the years; Amazon was 5.8% of the fund at the end of 2016 and Apple was 1.0%. Amazon has been a large weighting in the fund, both in an absolute and relative sense, due to our assessment of its fundamentals and long-term value potential. We constantly think about Apple, too.


That said, we take a very different approach from what can be viewed as momentum-driven strategies and passive index investing. Technology today can disrupt industries and market leaders across all industries, not just within tech industries themselves. And when disruptions happen, they can really take down the largest companies’ returns. The greater the momentum, the sharper the decline.


So our analysts will constantly test the thesis, doing the fundamental work, whereas passive funds and momentum strategies will ride the upside and the downside. They can’t anticipate these disruptive trends.


Can you talk a bit more about how you think about disruption across industries?


Technology tends to be the source of disruptions across other industries, like Uber to the taxi industry or Tesla to the automobile industry. The concept of disruptive technology is important as it applies to both offense and defense in the fund.


Take e-commerce as an example. Our investment in Amazon is an offensive investment, but it has also led us to be very light in our other retail holdings. The disruption in the retail business not only informs us about what we should invest in, but also what we shouldn’t.


Disruptions can come from technologies and from other areas, and we are constantly asking ourselves what the implications might be for our investments and the broader economy.


For example, one of the massive disruptions in the world in the last decade has been the cost of Chinese labor. Manufacturing moved there as a result of that advantage, yet, after more than a decade, we’re probably seeing the tail end of that trend. Chinese labor costs are growing 10% to 15% per year, narrowing the gap.


What will that mean? Another disruptive trend is the increasing automation of assembly line jobs even in developing economies known for “cheap labor,” including China. We have obviously seen a lot of automation here in a good portion of the developed world, but we are now seeing it abroad as well.


Amazon remains the largest holding in The Growth Fund of America. What makes the company unique?


Amazon is a really well-managed company. We spend a great deal of time studying the company and its approach, especially with CEO Jeff Bezos. Management constantly challenges people and tries to focus on the important things. They’re aware of the pitfalls of being a big company and try to manage that.


The company is just scratching the surface in its web services business and is growing market share globally. But again, as I said, our analysts evaluate each company on an ongoing basis because, depending on current valuations, our investments in a company will shift over time. 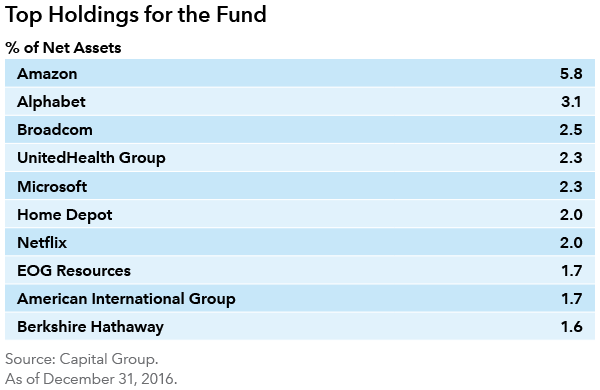 Health care stocks have been prominent in the fund. Are we fundamentally at an inflection point for those stocks?


The sector tends to trade up and down with sentiment, and is one where it can pay off to take a contrarian view. If you can find a sound company at a low valuation, sometimes even six or seven times earnings, when sentiment is negative on health care and you can hold the company for a longer period of time — four years tends to be our typical holding period — you can feel pretty good about making that investment.


Health care stocks have been coming down during the past year and a half because of scrutiny over drug pricing. For me, the pool of potential investments is getting bigger, not smaller, as stock prices come down. If the industry continues to struggle, we will try even harder to find companies we think will survive.


Are there certain areas of health care that are more interesting to you than others?


Valuations reversed over time, with Express Scripts selling below 20 times earnings in 2016 and CVS selling above 20 times earnings. At those new prices, we’re going to be much more naturally attracted to the ones that we think are the better values.

The fund made significant investments in energy stocks a few years back, when crude oil prices collapsed and these stocks tumbled. These are not typically viewed as growth stocks. Your thoughts?


We reinvested in energy due to a combination of valuation and fundamentals. We felt that when oil prices fell to $30 per barrel, that was not an equilibrium price, and thus oil prices could rise from there with time. It was an attractive time for capital appreciation or growth in value from a low base. If you just look at valuation alone, you can get caught in value traps because there are businesses that aren’t poised to improve and in fact could get worse.


One of the larger holdings in the fund, EOG Resources, is a company we came to know very well over the years. We held the company in the fund for many years, but we added to our positions when the valuations were attractive, along with other energy companies.


Not all of our investments have worked out as well as EOG Resources, but the thinking was that these stocks were on their heels and that the valuations had fallen as much as they could. The companies’ managements were showing some capital discipline, which is usually a good sign in a cyclical industry like energy.

Our investments in energy are a good example of our more flexible approach to growth. In addition to applying a valuation-based approach to traditional growth stocks, we also look for high-return capital appreciation opportunities: ugly turnaround situations that are at a price that just does not reflect where they could be in three or four years.


When that potential is high, they can find their way into the fund’s portfolio. So, we think in the long run that can be very helpful to investment returns and is additive to the narrower, conventional style-based approach to growth investing.


What are you most excited about as you look out over the next 10 years?


As an engineer by background, I think technology has a tremendous amount of change and promise going forward. For example, we’ve only scratched the surface in utilizing big data across all kinds of industries. This is the kind of disruption that tech brings across lots of other industries. We are still reducing the cost of computing, while the speed is growing.


We also try to find good older businesses that can withstand technological changes and operate well. A good example is Home Depot, whose business is more insulated from online competition than other retailers. First, the store sells bulky items that are costly and logistically difficult to ship. Second, unlike other retailers, Home Depot still offers a valuable in-store experience by providing advice to do-it-yourselfers that an online shopping experience just can’t duplicate.


Don O'Neal is an equity portfolio manager with 33 years of investment experience. He holds an MBA from Stanford and a bachelor's in nuclear engineering from UCLA. He is also a CFA charterholder.