The Meticulous Whimsy of Seuss

It’s impossible to overstate Dr. Seuss’ impact on children’s books. He’s one of the best-selling authors of all time, regardless of audience or genre. Educators still laud his books’ adherence to a rigorous and well-researched pedagogy, and one of his proudest achievements was replacing the old “Dick and Jane” primers with animated verse that children wanted to read. And as biographer Brian Jay Jones explains in Becoming Dr. Seuss, the renowned writer’s combination of silly and serious was a difficult balancing act — Theodor Geisel rarely produced more than one Dr. Seuss book a year, and he agonized over every word, line and color.

Dr. Seuss’ books seem so simple — the breezy rhythm, the silly rhymes. But they didn’t come to him all that easily, did they?

It was as hard as writing any book for grown-ups. He felt that these books are really tough to write, and they shouldn’t be so casually tossed off. One of the things that I didn’t know going into this is that, from The Cat in the Hat forward for the most part, there’s pedagogy behind the Beginner Books, even behind something as simple as Fox in Socks.

And I think even as he battled with Phyllis Cerf, one of his partners and editors, about educator-approved laundry lists of age-appropriate words, he still took them very seriously and knew he had responsibility there. That’s one of the reasons parents and teachers loved his work: They knew there was a science behind it, and he took that science very seriously.

His early books showcase that studiousness too, even before he was working with education experts on the Beginner Books line he co-founded at Random House.

The fact that he took writing so seriously, even before he knew what he was doing, speaks volumes to just how intuitively good he was and how much he valued the reader. His sense of his books was, “I don’t do this just for children; I write for people.”

Even before Beginner Books, when he lectures at the University of Utah in 1949, Seuss is telling the students in his class, “These books need to matter.” He says: “The worst thing you can do is write a book that you think a child should be reading. Give them a book they actually want to read.” One of the things he was proudest of was sweeping Dick and Jane, with their lives of quiet desperation that no child could relate to, right out of the classroom.

Your book is called Becoming Dr. Seuss — a nod to Theodor Geisel’s many careers before he became Dr. Seuss. Is there a point where you can say, “This is the Seuss we know and love”?

I think there’s always been a Dr. Seuss, which is why he was signing that name on his work before he even wrote his first kid’s book. The impishness is always there, but he doesn’t really become what we think of as Dr. Seuss — that bearded, wise sage who talks to children on their level — until much later.

It’s striking how much he did in life before his writing career began in earnest. He didn’t even have that iconic beard until he was in his late 60s.

Yeah. He couldn’t write full time until he was in his 50s, when he landed on the double whammy of The Cat in the Hat and How the Grinch Stole Christmas! in the same year — 1957 — which is incredible to me. That’s the moment he could finally stop trying to figure out how to supplement his writing income. We always assume that Seuss must have always been successful because we all know and love his books. But he wasn’t.

So what did Geisel learn along the way that let him become Seuss?

I think the faith and adoration of Bennett Cerf, his editor at Random House, is a huge part of that story. When Bennett hired him, Seuss only had two books. But Bennett said: “You know what, I think you’re great. I can see you’re a genius. Whatever you want to do, we’ll publish it.” And right off the bench, Seuss tanked with the nonchildren’s book The Seven Lady Godivas. But having somebody who’s willing to stand there and keep investing in you — even if you’re tanking — and just saying, “Keep trying” is huge.

Learning how to storyboard and story-tell from director Frank Capra and animator Chuck Jones [of Warner Brothers and Looney Tunes fame] were also critical. When they’re working on the Private Snafu Army training cartoons during World War II, Jones tells him: “Stick it up on the wall. Take a look at it. Make sure you know what it looks like.” Meanwhile, Capra is saying: “Keep the plot moving. People respond to the plot.” Capra underlined in blue the parts of Geisel’s script that advanced the plot and told him, “If there’s not enough blue, you’re in big trouble here. You’re losing your story.” That made a huge difference in Ted Geisel and the way he approached storytelling as Dr. Seuss.

And he later became a great influence himself. I didn’t realize that he’d worked with the Berenstains.

Yeah, the great recruiter! There’s a great story about his first meeting with Jan and Stan Berenstain, the creators of the Berenstain Bears. When they come into his office to discuss their very first book, he’s already got their pages pinned up on the wall and there are notes everywhere. They leave the meeting practically in tears, but what does he tell them as they walk out the door? He basically says, “You guys are great.”

Now, how can you feel that you’re great when you’ve got hundreds of nitpicky notes all over your work? Well, the reason your pride and your feelings are intact is because he’s right. You can’t argue with John Lennon telling you your lyrics are bad. The word that kept coming up a lot in my research and interviews was “genius.” Everybody kept saying, “I don’t use this word casually, but Dr. Seuss is a genius.” It was one of those things — when it came to the work, everybody tended to know that he was right. He was always right.

The above article originally appeared in the Winer 2020 issue of Quarterly Insights magazine. 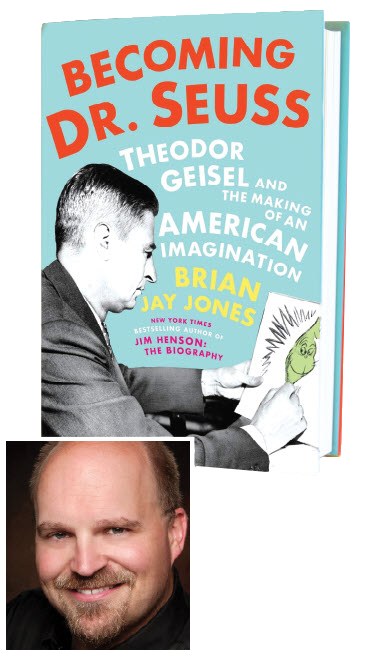 Brian Jay Jones is a biographer who has also written about George Lucas and Jim Henson. He recently relocated to New Mexico.