Deciding whether to adjust your stock holdings during periods of extreme market volatility can be a challenge. When equities struggle, investors are sometimes reluctant to commit additional money because they’re afraid of a further decline. Similarly, when prices rise, investors can be tempted to hold back out of concern that a rally may have run its course.

Unfortunately, such behavior can hinder long-term investment results, as you are statistically more likely to miss out on gains while sitting on the sidelines. For example, anyone who shied away from stocks after the 2008 financial crisis missed the tremendous rebound that began in early 2009.

Numerous academic studies have shown that our natural instinct to avoid pain frequently causes us to choose the path we believe offers the least likely exposure to harm — often to our detriment. In other words, our perception of the future is heavily influenced by recent experience, which may lead to “rearview investing.” This can result in jumping out of the market after a damaging loss (selling low) and hesitating to re-enter until confidence returns (buying high).

The volatility in stocks in recent days has caused some to ask whether now is a good or bad time to add to equity holdings. The market has been in an unprecedented, 11-year bull run, but uncertainty remains over how novel coronavirus will continue to affect markets and whether supply chains, particularly in China, will recover. Though no one can predict the future, it may be instructive to examine how the markets behaved through the last major market correction, in December 2018.

Timing the market is extremely difficult.

History shows that it’s impossible to time market movements with any degree of accuracy. That is why we strongly believe in building a long-term asset allocation based on your time horizon, risk tolerance, risk capacity and financial objectives. Retreating from the market at just the wrong time — or being out during spurts of strength — can be costly, suggesting that investors are often best served by staying the course through short-term fluctuations.

It’s tempting to believe that certain economic signals foreshadow market drops — and that heeding these indicators could somehow allow investors to sidestep a decline. To test this thesis, we looked at a range of economic environments in the postwar period, beginning in 1946. We found that stocks appreciated in 79% of all rolling 12-month periods, including both weak and strong environments. We then looked at more-challenging times, such as when inflation was high, gold prices were surging or unemployment was elevated.

Surprisingly, we found that equity markets delivered overwhelmingly positive returns even during these periods. As Figure 1 illustrates, only recessions seemed to have a somewhat reliably dampening effect on stocks. But to avoid those periods, investors would have needed to be clairvoyant and foresee economic downturns before they hit. The lesson: the market has been up the vast majority of the time. 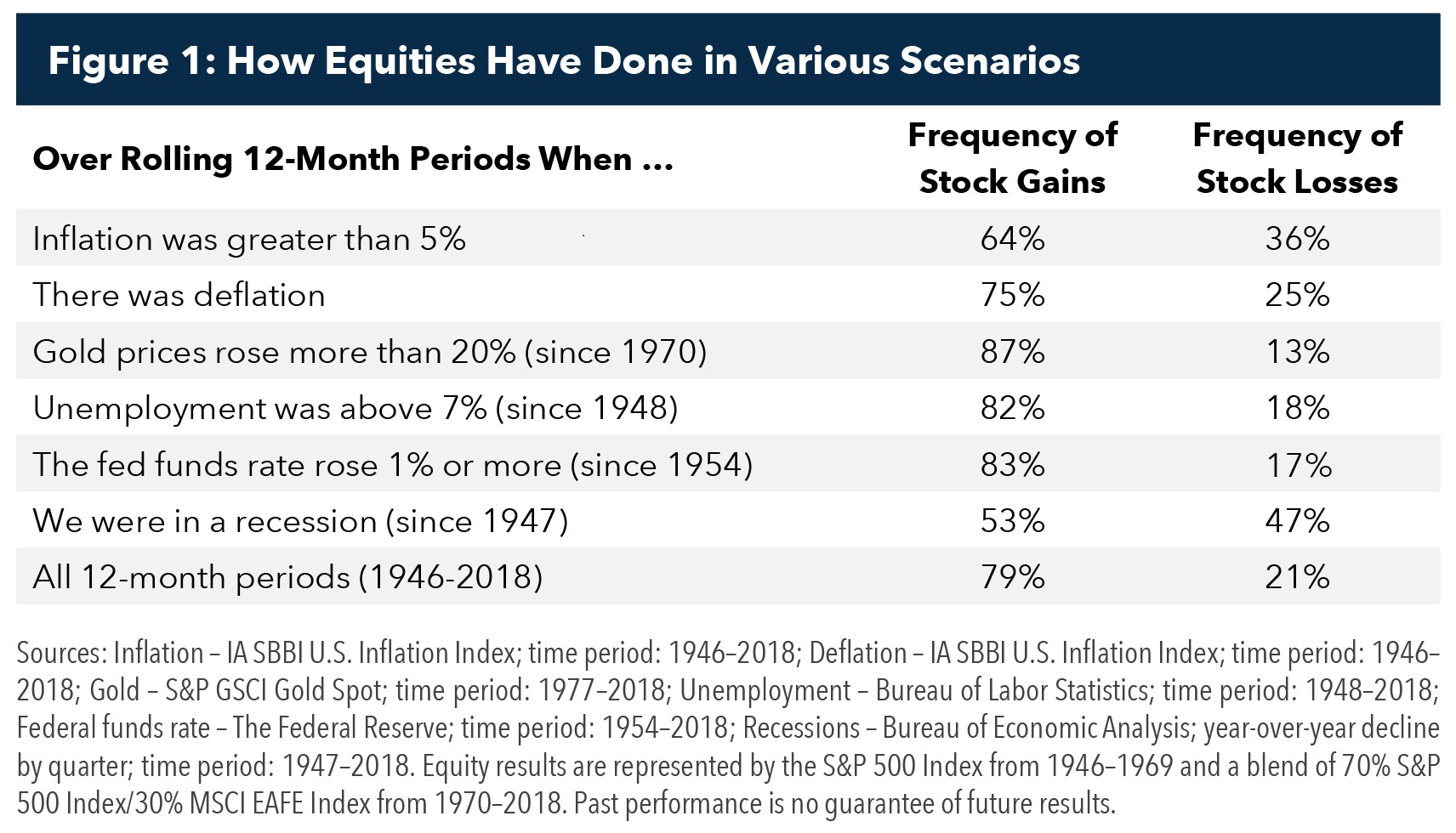 We also looked at whether there have been reliable patterns of strong markets following weaker periods. Specifically, we examined the frequency of various ranges of market returns over the same postwar period. We found that double-digit losses occurred in 10% of the 12-month periods, but gains of more than 20% occurred nearly one-third of the time. After a year of double-digit declines, the market rebounded admirably almost half of the time, delivering a return of 20% or better. However, a second year of double-digit declines struck in about 25% of the cases. With such a bifurcated outcome, it’s no surprise that recent market behavior is not a reliable way to predict future results.

If your current allocation to stocks is lower than your target, you may be considering an increase. But should you boost your equity exposure all at once or systematically over time? And if a gradual approach is preferable, over what time period? Making systematic investments over time is known as dollar-cost averaging (DCA). Because equities have tended to rise more often than they fall, a lump-sum investment may be appealing to some investors. However, if reducing exposure to short-term pain is a primary objective, DCA may be a prudent alternative.

We examined seven decades of data to estimate the range of outcomes an investor would have experienced in the first year after initiating a stock market investment under different scenarios: investing a lump sum of cash immediately or spreading it out evenly over three-, six- and 12-month periods. The potential rewards were much greater when funds were invested quickly, but so was the risk. During the best 12-month period for the market, a lump-sum investor’s return would have been 56.8%. But that investor would have experienced a loss of 45.3% had the investment been initiated at the beginning of the most challenging 12-month period.

To break this down further, Figure 2 shows the frequency of success for various dollar-cost-averaging alternatives. You’ll note that DCA rarely does better than lump-sum investing in rising markets, with a 12-month approach being more advantageous only 14% of the time. This is not surprising given the fact that cash kept on the sidelines reduces results in average or strong markets. Conversely, the 12-month approach has been superior 86% of the time when markets were weak.

Because most investors have time horizons longer than one year, we extended our analysis and found that the outcome was affected far more by what happened over the ensuing four years than by the initial 12 months. This is a reminder that the most important decision regarding whether and how to increase equity exposure comes down to your long-term wealth accumulation goals. If you are comfortable taking more risk in the pursuit of higher returns, consider making a lump-sum investment. But if short-term fluctuations create undue anxiety, dollar-cost averaging provides a method to gradually achieve your intended allocation target.

Sandra Morelli is a regional director and portfolio specialist based in our Atlanta office. She has 39 years of investment experience and has been with Capital Group since 2009.