Trade and Economic Concerns Send a Shudder Through Global Markets

Any surge in volatility is jarring, and never more so than when a sudden jolt punctures a long period of calm. That was the case in the closing months of 2018 as U.S. equities slumped to their worst year in a decade. An array of forces battered markets around the world, including the U.S. trade squall with China, wavering global growth and Federal Reserve rate hikes. Stocks still have meaningful factors going their way, most notably the solid U.S. economy and reasonable equity valuations. But the upheaval demonstrated the uncertainty that may hang over markets until clear signals emerge about the direction of the global economy.

In many respects, the U.S. continues to make impressive strides, with unemployment at its lowest rate in nearly half a century and consumer spending expanding solidly. The U.S. is clearly in a latter stage of its economic cycle. But though economic and earnings growth are likely to slow from spirited levels, both are projected to remain solidly positive, with few signs of a recession in the immediate future.

Of course, it didn’t feel that way in the fourth quarter, when investor attention swung from the economy’s sunnier long-term attributes to its formidable near-term clouds. Technology stocks were thumped by fears of government regulation and the simple laws of gravity after a multiyear rally. The selloff rippled through to other sectors, particularly economically sensitive ones, amid worries about stalling overseas growth and the waning effects of corporate tax cuts.

The Fed scaled back its projected 2019 rate hikes from three to two, but that didn’t allay fears that the central bank has failed to grasp the magnitude of threats encroaching on the economy. The U.S.’s rancorous trade clash with China clearly unnerved the market, with stock prices tending to lurch downward on days of intensified political rhetoric.

The downdraft felt sharp in part because it came on the heels of abnormally low volatility. The S&P 500 index moved 1% or more about one-quarter of the time in 2018, in line with its average over the past 30 years. But that was a notable jump from a mere eight days of such volatility in 2017.

Of course, all expansions eventually give way to recessions. And though contractions are painful, they are relatively short-lived. Since 1970, the average recession has lasted 12 months and lopped 1.6% from GDP. Expansions, by contrast, have averaged 72 months, with a cumulative 23% rise in GDP. It’s normal for markets to fall during recessions or in the periods leading up to them. But stocks can snap back quickly as worries fade, with some of the market’s best months having come on such rebounds.

The outlook for the U.S. wasn’t helped by conditions abroad, especially in China, where the economy slowed more than expected. Consumer spending, manufacturing, credit growth and housing are all showing signs of weakness. The government has taken steps to avert a so-called hard landing, including measures to spur bank lending and boost infrastructure outlays by local governments. However, the economy is expected to slow further this year before the stimulus measures are felt in 2020.

Longer-term prospects remain encouraging as China’s middle class continues to expand and consumer demand shows up in a cross section of industries. Wealthy households are drawn to luxury goods, overseas travel and housing, while new entrants to the middle class are fond of smartphones and skin care products. Medical care and life insurance are popular across income levels.

A mix of external and domestic factors dragged down European stocks throughout the year. Export-oriented multinationals were pinched by Chinese economic weakness, squabbling over Brexit and political unrest in the eurozone. Protests erupted over an attempted gas tax hike in France while Angela Merkel announced this would be her last term as German chancellor.

Perhaps counterintuitively, investor disaffection with overseas equities may be setting the stage for future gains. International markets have lagged the U.S. for nearly a decade, and the relative return gap between them is at its widest point in nearly 14 years. That has raised the possibility that foreign shares are reaching so-called peak pessimism — where sentiment is so depressed and valuations so low that a turning point may be in sight. Indeed, a range of companies outside the U.S. are trading at much lower valuations than their U.S. counterparts. Our portfolio managers have sought to take advantage of this relative weakness.

The economic outlook may be improving in Europe, according to a Capital Group analysis. There are early indications that growth may have troughed in late 2018 and is now picking up thanks to lower oil prices and looser fiscal policy in leading countries. That includes tax cuts and spending increases in Germany, and similar measures in France as the government seeks to mollify “yellow vest” protesters. 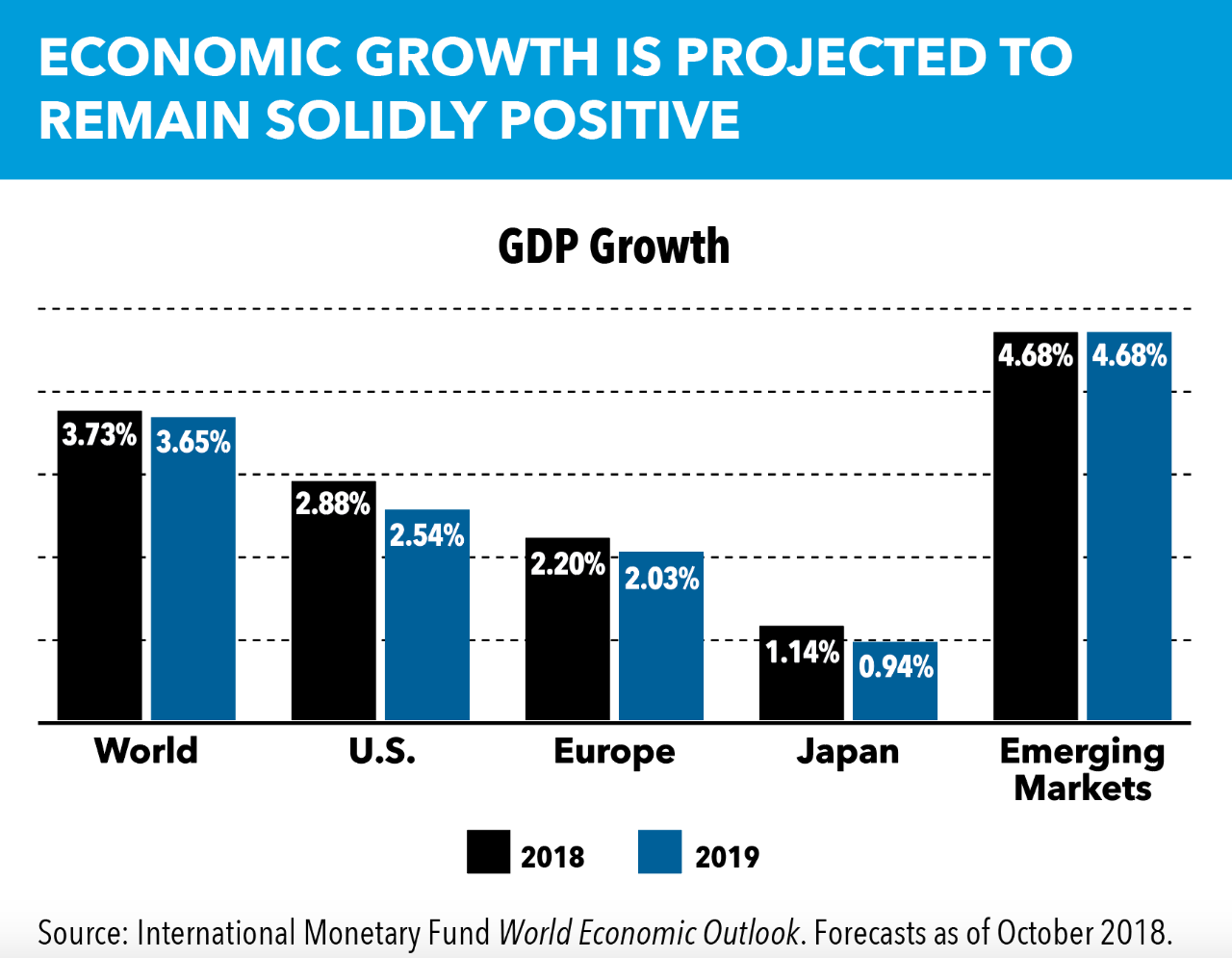 Our portfolio managers have been drawn to sectors benefiting from secular trends that are likely to remain in place regardless of fluctuations in economic conditions. For example, spending on cloud computing services is projected to nearly double to more than $300 billion by 2021, according to research firm Gartner.

The digital evolution is also boosting the prospects of securities exchanges. These businesses harvest enormous amounts of information from the trades they execute, which they repackage and sell in subscription formats. Beyond that, the recent spike in market volatility has boosted revenue from trading operations. Our managers are also optimistic about companies in the biopharmaceutical industry as clinical research leads to potentially breakthrough therapies for cancer and other diseases.

It can be easy to overlook the benefits of bonds when stock prices are rallying. That was especially true at certain points in the year when rising yields weighed on investment returns. However, the central role of fixed income was evident at year-end as bonds provided a refuge from sputtering stock prices. Signs of economic vigor pushed the 10-year Treasury to a brief high of 3.2%. But yields reversed course in the fourth quarter to close the year below 2.7%, resulting in a bond rally that helped offset the stock market decline in client portfolios.

Given the uncertainty in the economy and still-tight credit spreads, our investment team has sought to focus on high-quality securities that may offer a measure of protection in adverse market environments.

Regardless of economic conditions, the gyrations in financial markets highlight the need to have a well-balanced portfolio. Diversified holdings of stocks and bonds tailored to an investor’s personal financial needs can provide the best opportunity for successful outcomes in any market environment.

The above article originally appeared in the Winter 2019 issue of Quarterly Insights magazine.