In this interview, Capital Group technology analyst Irfan Furniturewala shares his long-term outlook on the sector, his view on current valuations and his thoughts on some of the recent challenges facing the so-called FAANG stocks — Facebook, Amazon, Apple, Netflix and Google-parent Alphabet.

Q: What’s your outlook on the technology sector, given recent news events that have taken the sheen off some of the biggest and best-known companies?

A: There is no doubt that technology valuations are high, especially relative to the rest of the market. But many of the big tech stocks, or tech-related stocks — such as Facebook, Amazon and Netflix — have much better growth prospects and have been able to support these higher valuations.

Now with greater regulatory scrutiny and a serious trade dispute with China, the market is questioning the high-growth prospects that have been baked into the valuations of some of these companies. As a result, we are seeing a rise in market volatility led by technology stocks. Questions over the viability of cross-border mergers-and-acquisitions in light of the quashed deal between chipmakers Broadcom and Qualcomm further raise concerns around the scale advantage that dominant technology platforms typically enjoy.

Q: Given the recent controversy over the improper sharing of personal data at Facebook, do you think “Big Data” companies such as Facebook and Google will be hit with new government regulations?

A: Yes, I think that’s a likely outcome. Until this episode with Facebook and Cambridge Analytica, the fear that there may be greater regulatory scrutiny of Big Data companies was more nebulous. We now have a real-world case where this outside firm gained access to private information on some 50 million Facebook users. Now the issue has become very real, and we may see greater scrutiny of Big Data companies in countries around the world. These companies always had a barrier to entry in China and now they may face some obstacles in other countries, as well.

One could argue that Facebook was a little bit late to the apology table. But the company is now admitting that it made a mistake and it’s vowing to change its policies and procedures, and I think that’s the right approach. Sharing of customer data is a very sensitive topic, but I think they will find a way to resolve the issue, or Congress may resolve it for them.

It may actually be a good thing to establish some new rules governing how these companies can gather and share information about their customers. When it’s all said and done, I don’t think it will hurt the profitability of Facebook or Google in any meaningful way, and it may help to restore the trust of some customers who are rightfully upset about the improper use of their personal data.

Despite these challenges, the big data companies — be it in search or social media — provide critical services. They are like modern day utilities. Take Facebook. At the end of the day, what makes that company so successful is that it provides an incredibly valuable service, keeping people connected with friends and loved-ones in real time over the largest social network in the world. The ad revenue monetization is also seamless. When you scroll through it with your thumb on the phone, the ads are just part of the experience. The same holds true for its other assets — Instagram and WhatsApp. So, long-term, I continue to believe that these are very viable companies with long runways for growth.

Q. Let’s talk about Singapore-based chipmaker Broadcom’s takeover bid of U.S.-based Qualcomm, which was aborted on objections from the U.S. administration. What does it mean for future mergers?

A: With this transaction, you have seen the U.S. identify a national champion of sorts in Qualcomm. There are certain industries that are sensitive given the information they can control or their critical nature in defense and other systems. The semiconductor industry is one such area. Given how preemptive the U.S. has been on this merger, it is quite likely that we will not see much cross-border M&A for a while.
It’s been over 18 months that Qualcomm has been waiting for regulatory clearances from about 10 countries related to its acquisition of another chipmaker, NXP, based in Europe. While all other regions, such as the EU, Japan, South Korea and Taiwan have given their clearances, China hasn’t yet cleared this acquisition. Given these types of difficulties and the elongated timeline, I think we will see far less cross-border M&A going forward.

Q. You mentioned the trade dispute with China. How big of a challenge is that for the technology sector?

A: At this stage, a lot depends on how China responds. Rising trade tensions between the U.S. and China represent a real threat, especially for hardware companies and less so for the semiconductor companies. Many of them are highly exposed to China, since much of the supply chain flows through that part of the world.

For Apple, about 20% of the company’s revenues come from China, and many of Apple’s products are built there. Apple’s main supplier, Foxconn, employs more than 1 million people in China. So the inter-linkages are quite substantial.

To an extent, open borders are important. For many technology companies — and taking Apple as an example — the business models are built on scale. Build once and sell the same product worldwide in volume. If the markets get fragmented, and the product you sell in the U.S. is different from the product in China, which is different from the product in India, then you lose that scale and the incentive to invest back so much in research and development. That is what the market is grappling with.

So far, we’ve seen the U.S. impose billions of dollars in tariffs aimed at China, and China has responded in kind, targeting U.S. products. We’ll just have to watch and see how it plays out. 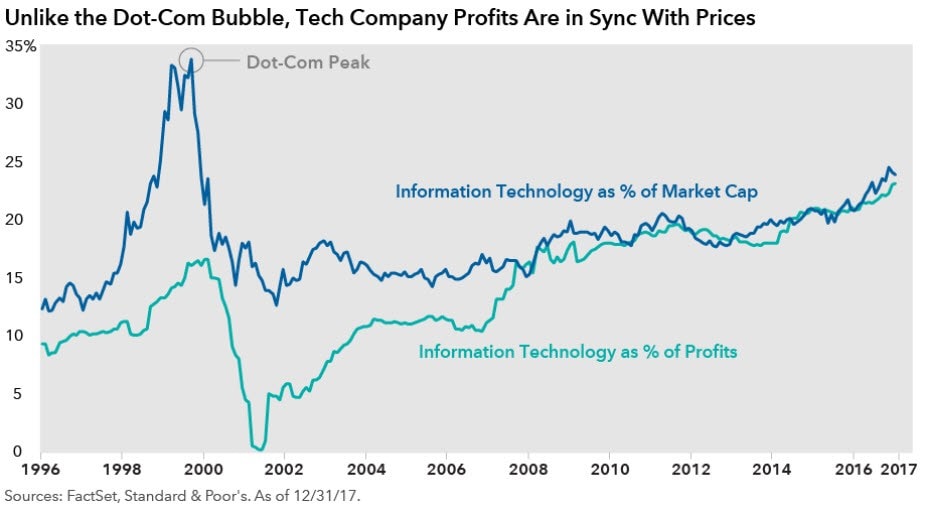 Q: Do you view this volatile period as an opportunity to buy shares at more attractive valuations?

A: Oftentimes, I do see these difficult periods as buying opportunities, although each investment decision must be judged on a company-by-company basis. While valuations in this sector are always a concern, in my view, they are not excessively high. In fact, they are nowhere near the nose-bleed levels we saw in the late 1990s — and the big difference now is, the earnings are coming through quite nicely.

The technology leaders, especially the FAANGS, absolutely dominate their respective industries. They have earned their leading positions. They have decimated the competition. They attract the best talent from all over the world. Their R&D engines are full-throttle and humming. And they have very strong balance sheets that are the result of their amazingly innovative business models. So, I expect earnings to continue to accrue to these companies and these are the types of companies that I want to invest in over the long term. Many of them offer the growth potential and the dominance to justify the valuations. The long-term runway looks very attractive, in my view. 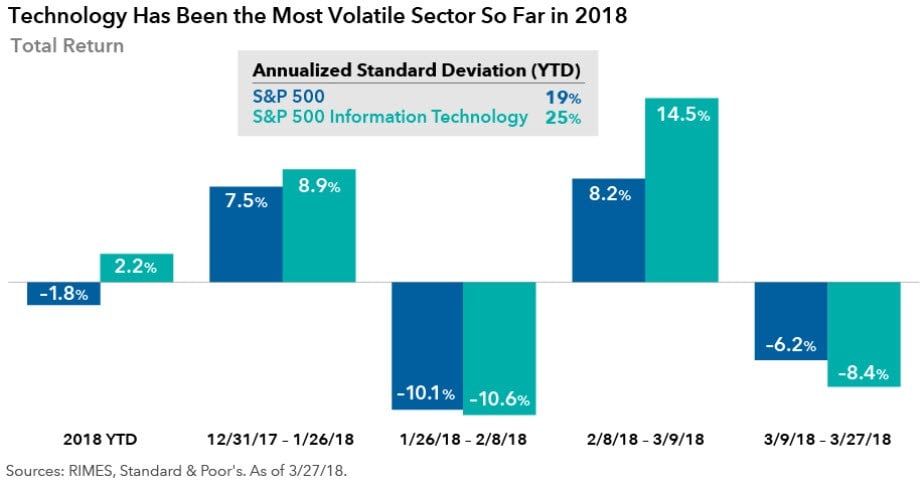 Q: Until very recently, Amazon had held up better than other tech-related stocks during this downturn. Why do you think that was the case?

A: If you consider the two big issues right now — regulatory risk and China trade risk — Amazon is less exposed to both of those. Amazon does not monetize its user data in the same way as some of the other internet companies and so it is more difficult for the U.S. government to regulate Amazon’s business. And since Amazon does not have much business in China, any sort of escalation in U.S.-China trade tensions doesn’t really mean much for the e-commerce giant. Having said that, President Trump has tweeted about Amazon avoiding taxes, taking advantage of the U.S. Postal Service and causing store closures all over the country. In recent days, this has created weakness in Amazon’s stock.

Q: Growth stocks have outpaced value stocks by a wide margin in recent years. Do you see that changing anytime soon?

A: In my view, we are still in the sweet spot of the economic cycle. We are experiencing synchronized growth in most of the world’s major economies. Interest rates are still very low by historical standards. While the Federal Reserve is raising rates, the European Central Bank and the Bank of Japan don’t appear to be in any hurry to catch up. So, given this favorable environment, I think there is a long runway for growth. 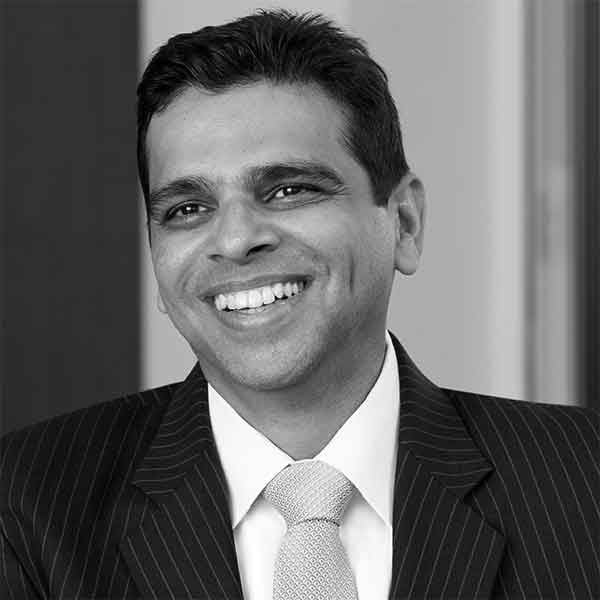 Irfan Furniturewala covers U.S. hardware and semiconductor companies. He has 17 years of investment experience, 16 with Capital. Irfan has an MBA from the Wharton School of the University of Pennsylvania.