The U.S. and China, the world’s two largest economies, appear to be entering a new era in economic and trade relations. By announcing planned tariffs on steel and aluminum imports March 1, U.S. officials have lobbed the first volley in what are bound to be contentious negotiations. While these specific tariffs affect many countries, including allies like Canada and Europe, investors should keep their eye on the China angle, which will in the months ahead become the much bigger source of controversy.

The U.S. is on the verge of a fundamentally new moment on trade with China. As the Middle Kingdom’s economic power grows and its global ambitions become clearer, a new consensus is emerging in Washington that a more hardheaded approach to both trade and geopolitics is merited. President Trump’s challenge to current trade arrangements, building on arguments he made during his campaign, should be viewed within this broader framework.

One shouldn’t assume this president’s unusual and aggressive negotiating style is a prelude to an all-out trade war, which would hurt both sides. Indeed, when it comes to the U.S.-China relationship, the events unfolding are not inconsistent with the likelihood of a new equilibrium being reached on trade over the next few years. As each side feels the other out and tests the others’ mettle and ultimate goals, however, it also seems likely we’re in for an unsettling period of tit for tat that may rattle markets and companies caught in the crossfire. China will be seeking to offer the fewest concessions it can to accommodate the president; while Trump’s bottom lines seem (by design) unclear at this point.

The tariffs broadly announced March 1 include 25% duties imposed on steel and 10% on aluminum — though the devil will be in the details as the fine print gets finalized in the days ahead. But this move — which affects many countries, and was initiated by the Trump administration to assure the continued viability of U.S. steel and aluminum manufacturing — is only the beginning. Well-known Chinese steel overcapacity is the target of these global tariffs; yet it’s almost certain this administration will take additional steps more directly targeting China’s trade and other practices over the next few months. This could include filing of new cases with the World Trade Organization, imposing additional tariffs, instituting new requirements on reciprocity on investments and/or enacting new visa restrictions.

The big thing to watch is the so-called “Section 301” investigation into China’s theft of intellectual property, which will lead the president to brandish headline estimates of as much as “$1 trillion in theft” over the last decade or so — and to impose some set of as-yet-undetermined remedies.

How will China react? No one knows for sure, but my sense is that China will be proportionate, and also politically shrewd, aiming retaliatory moves to inflict pain on influential lawmakers and constituencies the administration cares about.

China’s long-term strategy is to create a more balanced and self-sufficient economy that is less dependent on foreign firms in key industries. It also wants to compete head-on in a number of key industries of the future; these ambitions contribute to Washington’s fresh perception of the Chinese challenge. For example, China is investing massively in the development of its own semiconductor industry and in artificial intelligence. While this will take time, American policymakers and business leaders are growing more anxious about the perceived threat.

Chinese corporations have also been active on the global acquisitions front, buying businesses or forming joint ventures in hopes of gaining key intellectual property. Western governments have pushed back recently, thwarting proposed deals by Chinese companies, and in many cases citing national security issues. The announcement by the U.S. on March 5 that it will review Singapore-based Broadcom’s proposed bid to acquire Qualcomm for security reasons is just the latest high-profile example. 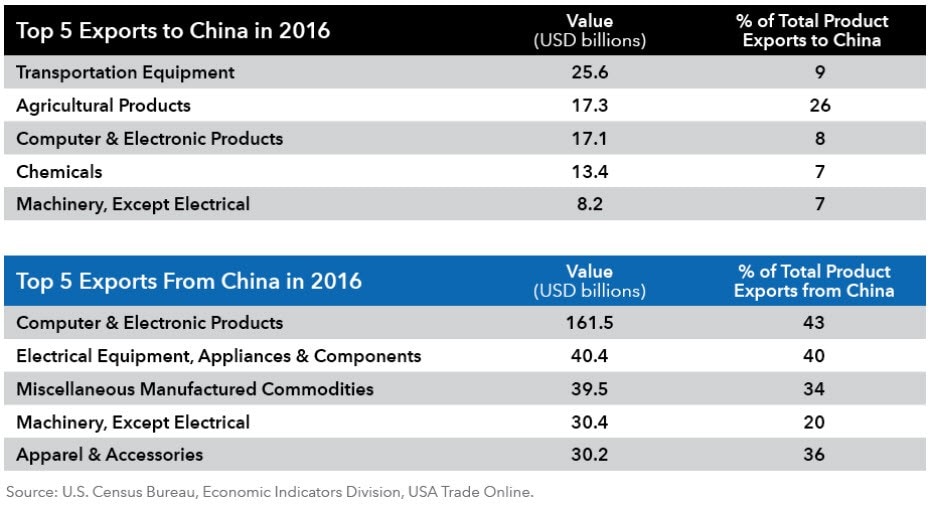 This new moment means some of the synergies from years of economic integration and trade deals are likely to come under pressure. We could see some weakening of linkages in both trade and investment, with some established supply chains perhaps disappearing.

So what are some investment implications? Some of America’s biggest exports to China are aircraft, agricultural products and semiconductor components used in electronic devices. These might become targets of retaliatory measures from Beijing, at least in the near term. Automakers and industrial machinery makers may also find themselves in the crosshairs. It is no surprise that industrial and transportation company stocks have weakened since the announcement. U.S. soybean and related agricultural producers, now major exporters to China, could be targeted as well.

For the U.S., following the tax cuts, trade is likely to be a top priority for this administration. As 2018 unfolds, a tougher stance on China will likely enjoy more bipartisan support than is widely recognized.

It’s also worth keeping an eye on the growing school of thought in Washington which argues that today’s level of economic integration with China harms long-term U.S. economic and security interests. Even short of any “decoupling” of the two economies, a broad consensus is emerging that China’s mercantilist policies are ripe for challenge. The next few weeks and months could thus see negotiations become contentious.

Even so, there are mutual interdependencies that can be a sobering influence. The U.S. trade deficit with China was $376 billion in 2017, with exports at $130 billion and imports at $506 billion. A large chunk of those imports are from U.S. manufacturers that have set up assembly lines and factories in China and depend on those supply chains. Substantial financial linkages are another factor to consider. China holds approximately $1.2 trillion in outstanding U.S. government debt, or close to 19%.

The impact of any new trade agreements will vary by industry. The aerospace, auto, industrial machinery and agricultural industries are where our analysts will look most closely to calibrate the impact on individual companies.

It also remains to be seen if the U.S. technology giants step back from huge investments in R&D in China.

While it’s tricky to predict the timing and precise steps that will be taken by officials in the U.S. and China on trade, it’s worth bearing in mind the wisdom of the late economist Rudiger Dornbusch who once wrote, “In economics, things take longer to happen than you think they will, and then they happen faster than you thought they could.” There’s a similar rhythm to how these geopolitical dynamics could unfold. 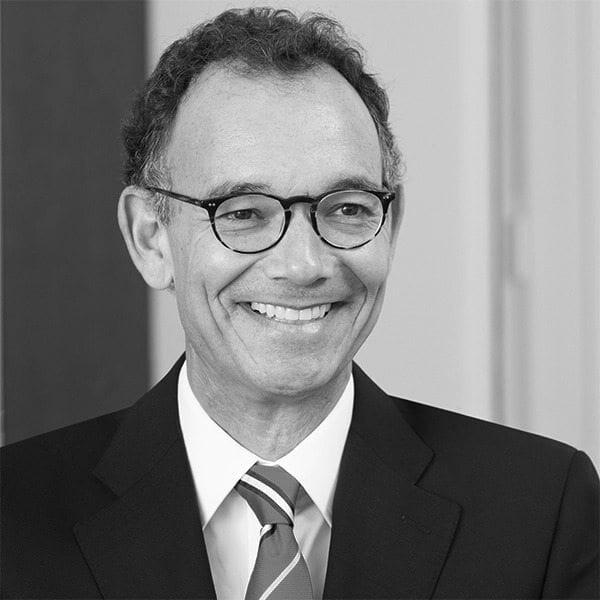 Matt Miller joined Capital in 2014. He has been a senior advisor at McKinsey, a Washington Post columnist and author, host of public radio's "Left, Right & Center" program, and a Clinton White House aide.