Subscription businesses are hardly new. Americans have been signing up for newspapers and other periodicals since the Colonial era, and in the 1970s and ‘80s music lovers who subscribed to Columbia House’s mail order music service could look forward to a new record or cassette in the mail every month.

Once the purview of old-economy companies — such as makers of elevators offering lifelong service contracts, or Gillette's approach to practically giving away razors and selling the blades — recurring revenue businesses have come into fashion with cutting-edge technology companies. Digital platforms and the advent of cloud computing have added a new dimension to the subscription model by providing smart, nimble companies with three potential benefits: expand their addressable markets, provide repeatability of cash flow and deepen client loyalty. 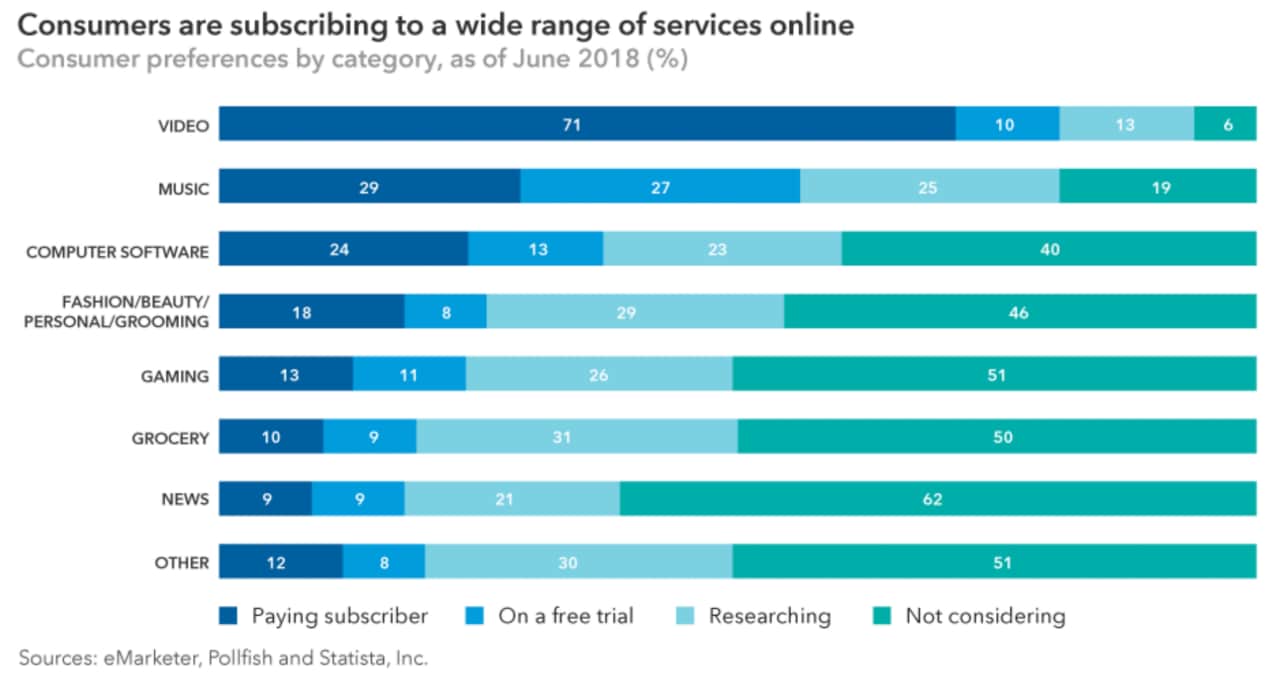 At this point in the economic cycle there is much talk about growth versus value, or U.S. versus international, but the subscription model is one that transcends all categories and represents a long-term secular trend. But not all subscription businesses flourish. Selectivity is critical. “Our fundamental research seeks to find the best of those companies, and when we find them we like to partner with them for the long term,” Berro says. “The best investments are the ones that just keep working for you.”

Here is a look at consumer- and business-focused industries where subscriptions are driving opportunity for companies and investors.

Streaming has altered the course of media consumption

Digital and mobile platforms have been at the epicenter of a seismic shift in the way people consume entertainment. These technologies helped foster the transformation from exclusively linear TV viewing to streaming media content on demand. Rather than being required to watch TV programs and movies by appointment in their living room, consumers can now receive content on their smartphones, tablets and laptops whenever they choose. 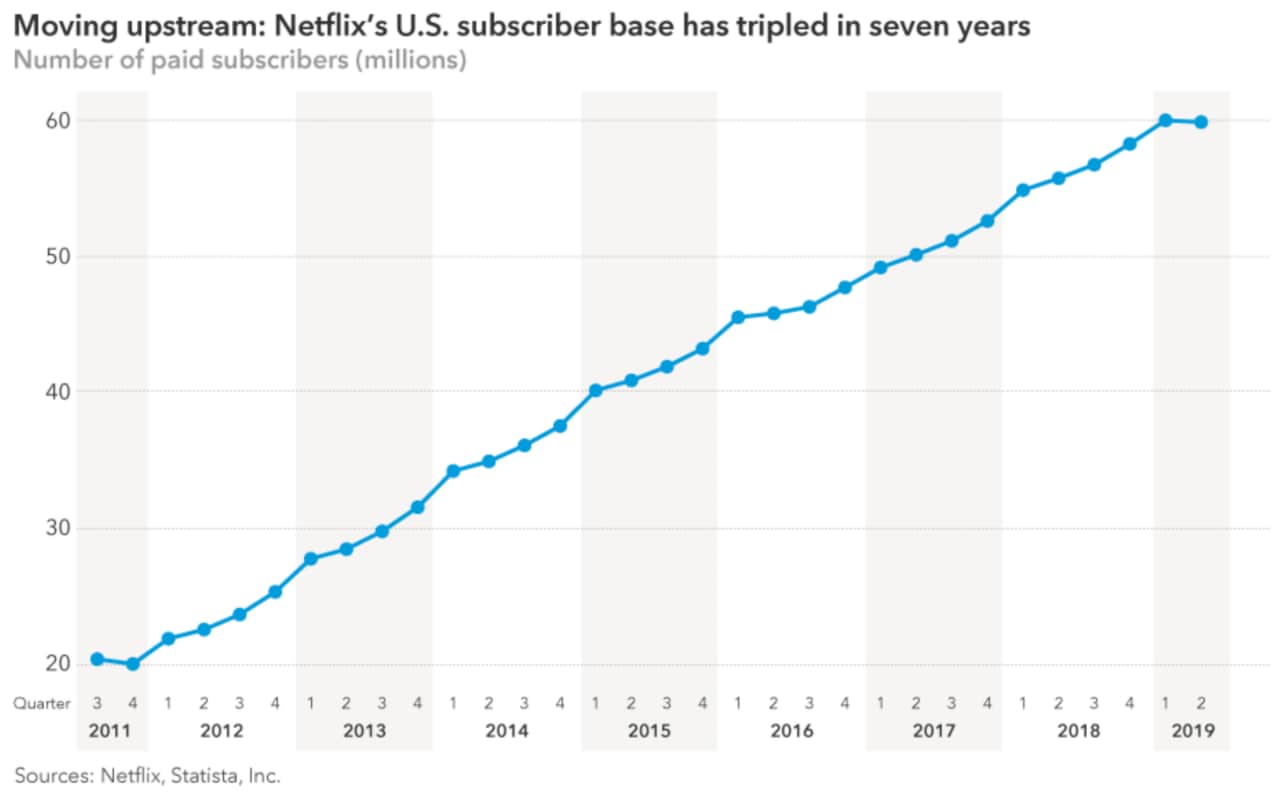 As of June 2019, Netflix had about 60 million U.S. subscribers, triple its total in 2011. Worldwide the number increases to nearly 150 million across dozens of markets. The competitive landscape may shift again later this year as Apple and The Walt Disney Company introduce their own platforms. However, the earlier entries have what may prove to be a significant head start, Barrett notes.

“I believe Netflix — as well as Hulu, YouTube and Amazon — have gotten sophisticated in using data analytics to put the right show in front of the right person at the right time,” observes Barrett. “In the future, that will be an important core competency of the winners in streaming video.”

Streaming is also transforming the way people listen to music. Just a few years after iTunes upended the music industry with the popularization of digital downloads, listeners today have moved en masse from downloads and CDs toward services such as Spotify, Pandora, YouTube and Apple Music. As of the end of 2018, total revenues for music streaming reached $7.4 billion, accounting for more than 75% of total digital music revenue in the U.S., according to the Recording Industry Association of America.

In the cloud, opportunity for software services is sky-high

Just as mobile platforms provided a tailwind for consumer-focused businesses like Netflix and Amazon, the advent of cloud computing has already created tremendous demand for online software service providers. 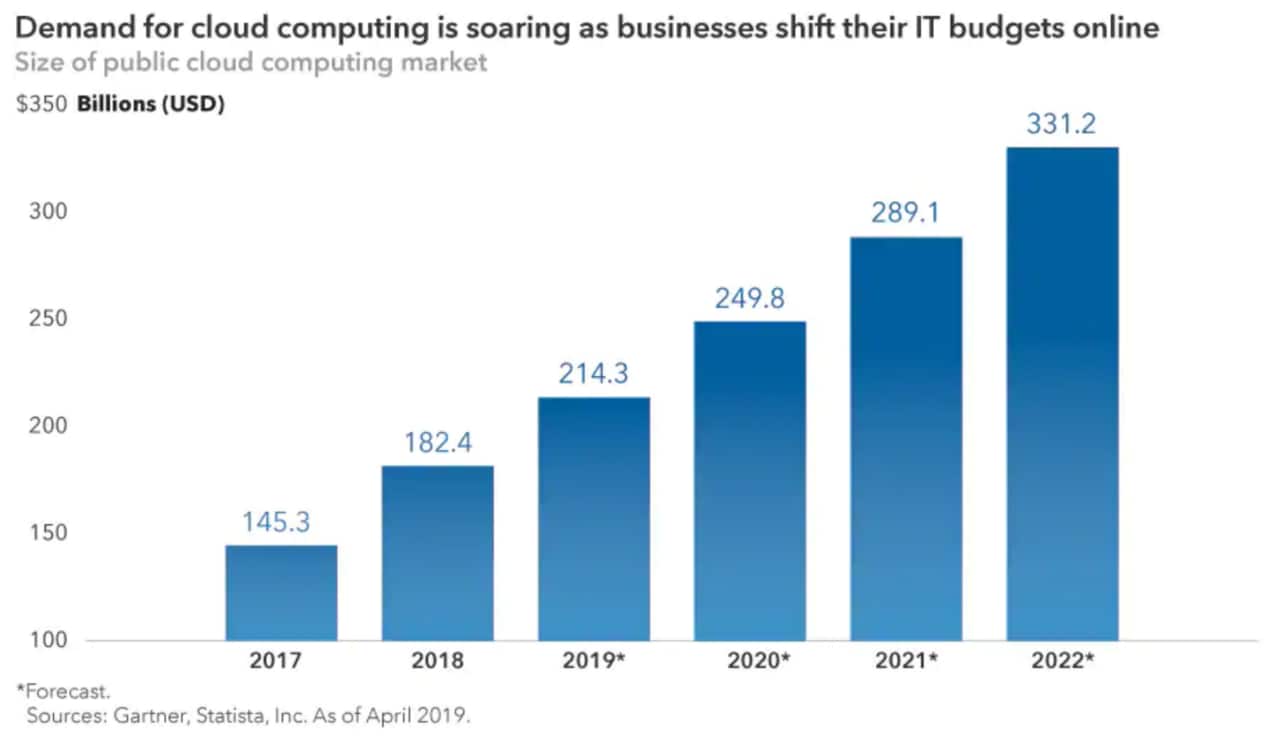 The cloud is a massive network of servers that provides users with remote access to storage and computing power through the internet. In other words, rather than making major investments in their own IT infrastructure, companies can gain access to data and software applications for a fraction of the cost through the cloud. By 2022, total spending in the public cloud computing market could reach $331 billion, up from $145 billion in 2017, according to industry researcher Gartner.

“Over the next decade, there will also be significant opportunity for companies focused on providing software as a service to businesses in the banking industry, in pharmaceutical and in industrials,” says Capital Group equity portfolio manager Anne-Marie Peterson. “By shifting from sales of hardware and software maintenance to a subscription-based model online, many service providers are expanding their addressable markets significantly. This is disrupting established business models while driving significant opportunity for early adopters.”

Consider ServiceNow, a subscription-based software services provider that manages human resources, help desk and other IT support. ServiceNow, which describes itself as a “digital workflow company,” claims 42% of the 2,000 largest global companies among its customer base, according to Fortune’s 2018 Future 50 report.

“ServiceNow’s subscription-based cloud offering has helped it retain customers at a high rate and also expand its addressable market,” Peterson says. “Many of their customers weren’t using software before.”

Banks, often the product of mergers, often have IT systems that can’t communicate with each other. “Whenever I meet with banks, I hear them talk about their need to modernize their technology,” Jonsson notes. “So they subscribe to a service provider like Temenos that can provide them with a complete IT solution.”

“Microsoft has changed its business model,” explains Berro. “Today it is mostly a subscription business, and its earnings sustainability and visibility are better than they’ve ever been. As a value-oriented investor I love earnings visibility because it can help me better understand the sustainability of a company’s dividends.”