Road to the Future | Capital Group

Road to the Future

How Driverless Cars and Other Breakthroughs Could Transform Society

Ever since the days of Henry Ford, few things have been as central to our cultural DNA as the act of buying a car. After all, America’s fabled love affair with the automobile is premised on the notion that each of us actually owns one. But futuristic as it may sound, this century-old practice may be heading the way of the Model T. I expect that within a decade, advancing technology will start to transform our car-buying culture into a car-renting one. Instead of purchasing an automobile, people will be transported by self-driving electric vehicles operated by ride-sharing companies. Drivers — if they can still be called that — will simply tap their smartphones to summon an immediate ride. We won’t pump gas, get tune-ups or circle crowded parking lots. We might not even get driver’s licenses.

This paradigm shift is the result of three interlocking trends — the advent of self-driving cars, electric vehicles and Uber-style ride sharing — and I believe the collective impact will be far-reaching. Virtually every facet of the transportation industry will be affected, from airlines to trucking to auto dealerships. The impact will extend to many businesses with seemingly little connection to automobiles, such as housing and insurance. On a personal level, the daily rhythms of our lives will change markedly as we gain mobility, free time and disposable income. Put all of these together and I believe that driverless ride sharing could have the most profound effect on the economy and society since the development of the Internet.

Although this new world will not dawn immediately, my colleagues and I are studying the potential investment implications. As with any disruptive technology, there are likely to be significant winners and losers. For instance, automakers and rental-car companies could suffer, while electronic-sensor manufacturers and home-improvement stores might benefit. The combination of lower costs, improved productivity and other factors could result in annual economic gains topping $2 trillion in the U.S. and $10 trillion globally.

To varying degrees, driverless cars, electric vehicles and ride sharing already have made dramatic strides, which are only likely to intensify in coming years. There’s no doubt that each faces obstacles to widespread adoption. Driverless cars must overcome technological and regulatory hurdles, while electric vehicles need battery prices to keep dropping. But progress is coming fast. For example, all major carmakers are ramping up their electric vehicle efforts to meet emissions standards and capitalize on expected declines in battery costs. In fact, electric engines are likely to become cheaper to produce than traditional internal combustion models within a few years. Such price reductions will ultimately spur consumer acceptance. Driverless cars, for instance, will slash the cost of ride sharing, a self-reinforcing dynamic that will help both become mainstream.

This evolution highlights a simple truth: owning a vehicle is expensive and inefficient. Far from the romantic notion of a carefree driver zipping along an open road, a more accurate picture of the American automobile might be an oversize vehicle parked in a driveway. On average, drivers use their cars only 6% of the time. Even at rush hour, usage tops out at 12%. What’s more, the typical car seats five people even though 70% of rides are single-occupant. American families pay a hefty price for all of this, with transportation eating up 17% of the average household budget.

Contrast that with the convenience and lower costs of renting a driverless vehicle whenever you need it. Instead of idling in traffic, employees could do work during their morning commute. Or watch TV on their way home. Or sleep overnight while being whisked to a weekend getaway. Beyond quality-of-life improvements, transportation costs could shrink because ride sharing would require many fewer cars and much smaller ones. People could use some of the cost savings for home renovation. If we don’t own cars, we won’t need garages — at least, not in their current form. The median single-family home is 1,500 square feet with an additional 500 square feet for a garage. Of the 80 million U.S. homes, four in five have garages. Many could be remodeled into living space. 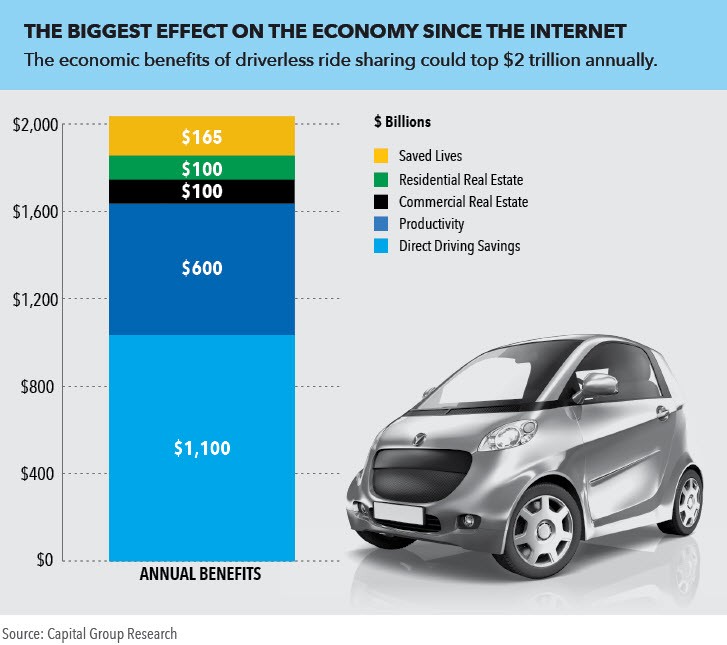 Of course, there would be downsides. Suburban sprawl could worsen if people live farther from their jobs. Still, driverless ride sharing would elevate society in broad ways, increasing mobility for the elderly and disabled while reducing collisions, DUIs and traffic-related deaths. The environment would benefit through lower emissions, as many vehicles would likely have only one or two seats, to match actual passenger counts.

As with any transformation of this magnitude, the advent of driver-free ride sharing would jolt much of the transportation world. Given that each ride-sharing vehicle could transport dozens of people a day, the U.S. might need as few as 40 million cars rather than the 240 million on the road today. That could slash car-maker revenue by 40%. Because large fleet companies would purchase and maintain vehicles, retail-oriented businesses such as dealerships, repair shops and auto-parts stores would slowly vanish. So would gas stations, because electric vehicles could drive themselves to charging stations. There would be no need for consumer auto insurance or rental cars. Airlines could see a drop-off in short-haul flights.

On the flip side, trucking companies, which are grappling with severe driver shortages and pinched profit margins, would benefit from the introduction of self-driving vehicles. Meanwhile, the increasing use of technology in automobiles would be a boon for companies that develop sensors and other advanced equipment.

There would no doubt be a significant impact on residential and commercial real estate. The remodeling of garages could weigh on builders if fewer owners traded up to bigger homes. But a renovation boom might help contractors and home-improvement stores. As for commercial real estate, prime street corners that previously had gas stations likely would be redeveloped. Ditto for parking lots at shopping malls and sports stadiums.

From an investment perspective, the ability to foresee trends is critical. There are bound to be many beneficiaries, but given the upheaval, it will be just as essential to avoid potential trouble spots that have secular forces going against them.

Needless to say, much is unknown and there are sure to be countless surprises in the years ahead. One thing that’s likely: future generations will probably scratch their heads at the quaint inefficiency of a world where people bought cars. To them, it’ll feel like the days of horses and buggies do to us. 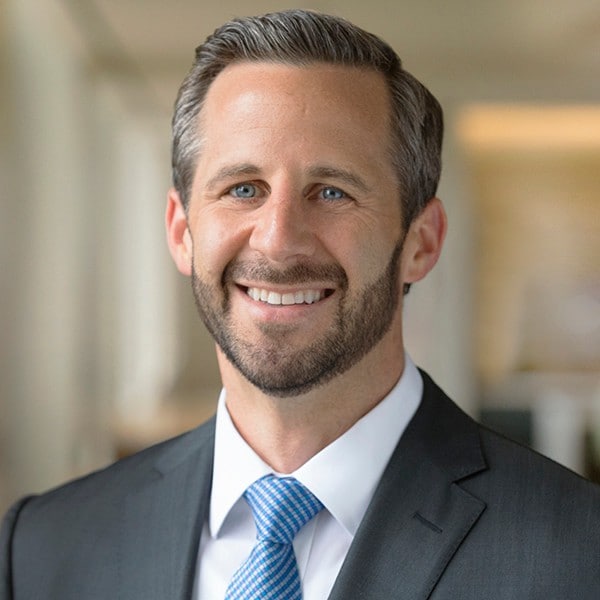 David Penner is a Capital World Investors equity analyst covering U.S. technology companies. He has 10 years of investment experience and has been with Capital Group since 2011.

The above article originally appeared in the Spring 2017 issue of Quarterly Insights magazine.