Make Your Own Luck | Capital Group

Make Your Own Luck

Have you ever wondered why some people get all the lucky breaks in life? Turns out, it’s not just chance, according to author Janice Kaplan. She lays out the formula for finding good fortune in her new book, How Luck Happens.

After publishing her previous best-seller, The Gratitude Diaries, Kaplan was struck by the response from readers who were amazed to see how much of their lives was actually under their control. That got her thinking about the one thing most people consider to be pretty random — luck.

Kaplan joined forces with Barnaby Marsh, a scholar and expert on risk-taking, to begin researching the topic. To her surprise, she discovered it’s possible to live a very lucky life once you understand the science and techniques needed to create it.

Below, she shares some of those secrets and reveals how to pass luck on to your kids.

Is there really such a thing as luck?

Some people use “luck” to mean something random that occurs, but real luck doesn’t just fall from the sky. We look at luck as having three strands. One is indeed random chance, which you can’t really control. But the other two are talent and hard work. By talent, we mean a whole bucket of things, like seizing possibility and being on the lookout for opportunities. And hard work is just that. When you put talent and hard work together, you don’t have to worry so much about random chance.

In other words, we can all create our own luck?

Absolutely. As we interviewed people for the book, we constantly heard things like, “My whole career turned around when I got a lucky break.” But when we took a couple of steps back to hear the story, we found that this “luck” came about because of talent and hard work. One entrepreneur we met talked about how his entire company was built on the random chance of being seated next to an investor at a charity event. That led to an investment that helped turn his company into a $100 million business. Sounds pretty lucky, but when we dug into the details, we realized the entrepreneur signed up for the charity event in the first place because he knew this guy would be there. And he networked in advance in order to get seated next to him.

Indeed, you point out that making connections is a powerful way to build bridges to luck.

Luck in your life is often based on the actions of other people. We are rarely able to do everything alone. But here’s what’s interesting: We normally think that those who are closest to us are in the best position to help us create luck. It turns out it’s usually the people in the next circle beyond that, those we know more casually, who are the most crucial. One reason is our inner circle often knows the same connections we do. Expanding your universe to those weaker ties is a great way to make luck.

What are some other ways to position ourselves for better luck?

One is to zig when others zag, which means doing things slightly differently from everyone else. Often, we think that if we just go along on the beaten path, we’re going to succeed. Sometimes that is true. But over and over again, we encountered people who just took a chance, went in a different direction and tried something new. Another important quality for luck is optimism. Negative people tend to get caught up in the place where they are. They can only see the hole where they’re standing and don’t have the vision to understand they can get out of it. If you’re negative and always looking down, there’s no way to create luck and see other possibilities. Developing a sense of optimism and staying positive is really important. The good news is you can change a negative mindset to become more positive, allowing you to turn around what seems like bad luck.

You also talk about skating to where the puck will be.

Yes, that draws upon the observation of hockey great Wayne Gretzky. He pointed out that when someone has the puck, your instinct is to skate toward them. But what you want to do is go where the puck is headed, not where it has already been. People tend to go where good luck has already happened instead of looking ahead to see what’s going to be next. Just because success occurred in one place before doesn’t mean it will be repeated.

Your book has a chapter on how to get lucky in love. Do tell.

Interestingly, that turned out to be our most unromantic chapter. The secret, it turns out, isn’t finding the “right” person. Rather, it’s committing fully to the person you do find and then making your mate’s needs as important as your own. So the secret to a great marriage or relationship often isn’t the luck of finding the person but in the commitment to make this connection work.

Is it possible to raise lucky kids or grandkids?

There are lots of ways to do that. Happy kids are lucky kids. Introduce them to many possibilities, and help them realize there’s not just one way to have a lucky or happy life. Often, we restrict the dreams of our children without realizing it. We forget there are multiple definitions of success. You can begin to create luck in kids when they are toddlers by encouraging them to question things, be creative and understand that they have control over their own lives. Don’t restrict their choices and make them fit into one particular path. The luckiest kids are those who are allowed to explore and be different.

Is there such a thing as simply having a lucky day?

Random luck certainly occurs, but often it’s not as surprising as you think. For instance, say you’re walking down the street and run into someone you haven’t seen in 20 years. You think to yourself, “That’s really lucky because what are the odds of that?” Well, the odds are probably much greater than you realize given how many people you know.

Do you believe in “bad luck?"

Sure, both good and bad random events occur. People get ill, they fall down, and they can become random victims of many things. But your goal should really be to make a lucky life for yourself. Once you have that vision in mind, it becomes a lot easier to turn any bad luck into good.

Has your luck improved since writing the book?

Actually, it has. I’ve become much more aware of being able to take control and make things happen. Remember, what makes us lucky often is a piece of information or social connection. Once you figure that out, you can make lots of luck from within. 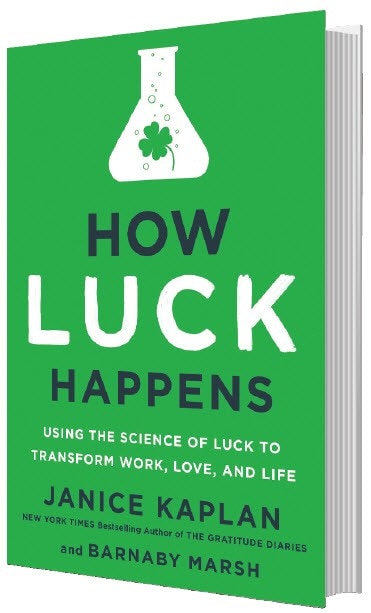