It’s rare for a U.S. economic expansion to enter its ninth year, and rarer still for the pace of growth to be accelerating. Then again, it’s uncommon for earnings to be so sturdy, consumer confidence to be so vibrant and unemployment to be so low. And the good news extends far beyond the U.S. Favorable conditions are taking hold around the world, with major economies undergoing a burst of synchronized growth. Of course, financial markets still face an assortment of challenges, including Federal Reserve rate hikes, geopolitical tensions and jitters over the sheer length of the economic upturn. But many of the catalysts that have powered the stirring global rally appear to be firmly rooted, spurring hope that further gains will come.

After years in which the U.S. was the global economic torchbearer, gains in the rest of the world have been striking. Previously lagging international equity markets have reached multi-year highs, carried along by many of the forces that fueled the U.S. in recent years. The broad-based nature of the expansion suggests that we may be experiencing a so-called virtuous cycle in which positive forces become self-sustaining and growth begets further growth.

Manufacturing has stood out as perhaps the brightest spot on the world economic stage. As shown in the below chart, factory activity is expanding in virtually every country — its best performance in more than a decade. Perhaps most notable: long-drowsy Europe is registering many of the strongest readings. 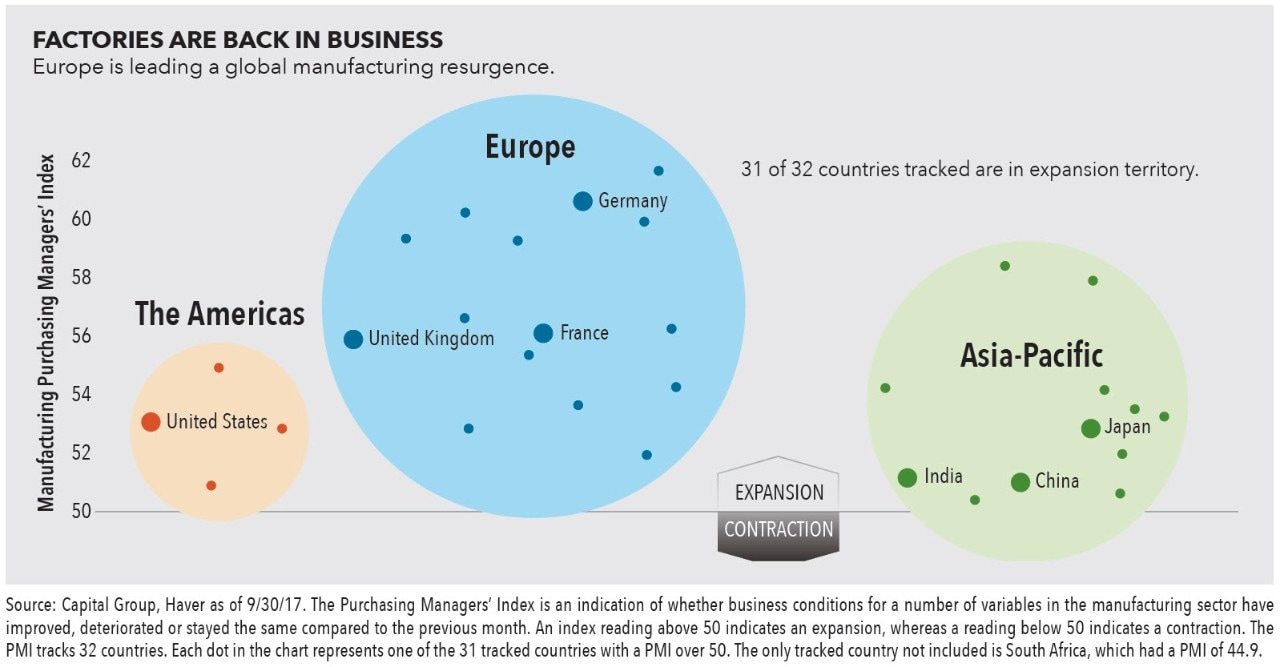 Other indicators rounding out the encouraging global picture include corporate earnings, which are up strongly in the U.S. but even more so in Europe, Japan and the emerging markets (see the chart below). Likewise, declining unemployment and increasing confidence among businesses and consumers have become global phenomena. 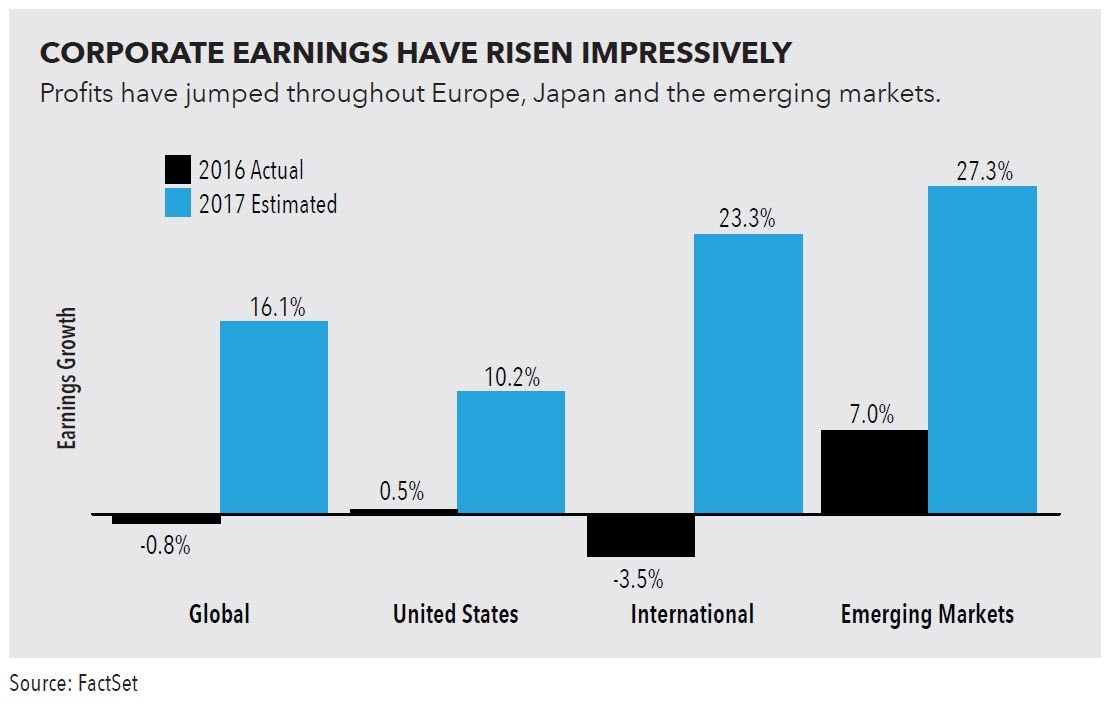 To be sure, global gross domestic product has been modest compared with past upturns. But the improvement has raised hope that durable recoveries are finally underway in nagging trouble spots such as Europe and Japan, and that the global expansion has the potential to be “stronger for longer.” The International Monetary Fund expects growth to increase solidly in 2018, with each of the world’s major economies contributing. Despite the forceful rallies, equity valuations remain more attractive overseas. Within many sectors, we are finding equivalent European or Japanese companies trading at notable discounts to their U.S. peers.

In a recovery that has chugged along admirably but unremarkably for years, the U.S. may be picking up steam. Economic growth topped 3% in back-to-back quarters for the first time since 2014, and many of the factors that have been at the heart of the U.S. expansion remain well-entrenched. Unemployment has dropped to a 17-year low, while consumer confidence is just off a 17-year high. Barring an unexpected economic reversal, the jobless rate may dip below 4% in 2018. The upbeat mood among consumers has been evident in retail spending, with consumer outlays on durable goods rising strongly in the third quarter and year-end holiday sales registering their finest performance in some time.

Growth has been aided by modest inflation and still-low interest rates. Despite a total 0.75% in rate hikes by the Federal Reserve, the yield on 10-year Treasury notes ended 2017 below 2.5%, lower than its average over the past decade. Meanwhile, business sentiment has soared amid the deregulatory push in Washington and anticipation of the tax overhaul package that became law in December. Improved sentiment appears to be translating into business spending, with capital expenditures improving toward year-end. Overall, the tax cuts are expected to boost GDP by as much as a quarter point this year and next, according to a Capital Group estimate.

Of course, the procession of record highs has pushed stock valuations to elevated levels. Lofty valuations don’t necessarily precipitate market corrections, and many of the negatives that historically presage lengthy market downturns, such as unrestrained investor euphoria, are not prevalent. Equally important, earnings have risen in lockstep with stock prices over the past two years, keeping valuations at roughly the same level as two years ago. Nevertheless, extended valuations can indicate more muted equity gains moving forward.

The overseas resurgence has been impressive.

The firming of the international economy may be most evident in Europe, as the pickup that took hold last year gathers momentum. Consumer sentiment, retail sales and corporate earnings have all moved higher. And though it’s still elevated at 8.8%, the eurozone’s stubbornly high unemployment has dropped to its lowest level since 2009. The improving conditions have prodded the European Central Bank to begin gingerly stepping back from its aggressive economic stimulus campaign. The central bank is keeping interest rates anchored at historic lows, but it has announced plans to scale back its purchases of government and corporate bonds.

Meanwhile, stock prices in Japan reached their highest level in a quarter century as solid exports helped to push up GDP for the seventh consecutive quarter. As in other countries, solid profit growth in Japan is fueling corporate capital expenditures, employment gains and household spending.

Emerging markets are on a roll.

The developing world is benefiting from a confluence of factors, including robust global growth, solid commodities prices, ongoing economic reforms and rising domestic demand. In China, growth remained strong as the government made economic stability a priority in the run-up to party leaders naming President Xi Jinping to his second term. Conditions should remain favorable in 2018: exports are expected to rise 10% or more, while wages should advance between 5% and 10%.

Long-term challenges, such as high debt levels, remain a concern, but they are unlikely to weigh on China’s economy in the near term. Housing should contribute to growth in 2018 despite a market boom that has brought a flurry of deals and ballooning prices, according to Capital Group’s China economist. Among other positive factors, buying demand remains vibrant, trade-up activity is robust, and mortgage debt is manageable.

The rally in emerging markets equities is more than 20 months old, with stocks up 70% since their trough in early 2016. The outlook remains promising, however, as these countries shift their economic bases from heavy dependence on smokestack industries to a greater reliance on the production of sophisticated technology. Overall valuations are still attractive on a historical basis and compared with developed markets. For instance, China, Taiwan and Brazil are all trading at about 13 times projected earnings over the next year, compared with 17 times for the MSCI World index.

As U.S. stock prices have climbed over the past year, our portfolio managers have trimmed holdings in pricier areas, such as technology, and redeployed the cash into less richly valued sectors. For example, positions have been initiated in some agriculture- and food-related businesses. The growth of the middle class in the developing world is expected to bring a rise in meat consumption as consumers earn more disposable income. But share prices of agriculture-related stocks — including farm-equipment and fertilizer makers — have lagged, creating attractive long-term buying opportunities.

Managers also have been attracted to select stocks within the energy sector, which has been weighed down by weak oil prices.

Even as the Fed lifts short-term interest rates, long-term rates have remained subdued. A variety of factors have kept a lid on bond yields, including quiescent inflation and steady buying demand from overseas investors because rates in Europe and Japan remain notably lower than those in the U.S. The Fed is expected to continue pushing up short rates this year, but the central bank has gone out of its way to move gradually and telegraph its intentions well in advance. Worldwide, monetary conditions are expected to remain accommodative as global central banks continue to make liquidity plentiful.

Though Fed rate hikes are commonly thought to dent fixed-income returns, history shows that bonds can fare well if inflation and economic growth are both moderate and predictable. Barring an unforeseen pickup in consumer prices, the Capital Group fixed-income team expects long rates to edge up only modestly as the year progresses.

Among other indicators, our managers are monitoring what’s known as the yield curve, which measures the relationship between short and long rates. Longer-term Treasuries normally carry higher yields than shorter-term issues, but the gap between the two has narrowed recently, raising fear that short yields could exceed longer-term ones. Historically, that dynamic has been a harbinger of potential recession. But Capital Group’s fixed-income team believes that an economic downturn is very unlikely in the foreseeable future.

The municipal sector has been a particular area of strength within fixed income, with solid returns and an encouraging outlook. Despite lower income tax brackets for both companies and individuals, muni demand has remained strong, particularly in high-tax states that are likely to be disproportionately affected by the reduced deduction for state and local taxes. Heavy muni issuance in advance of the tax bill last year gave managers the opportunity to acquire a range of attractive securities in areas such as water and sewer, utilities, hospitals and single-family housing.

Bonds remain an essential part of investor portfolios for the income they generate and the downside protection they offer during bouts of weakness in the equity markets. Despite the upbeat economic conditions in the U.S. and abroad, corrections in the stock market often strike unexpectedly, and fixed income can provide a cushion against volatility.

You’ll find more on our current thinking and how we’re positioning client portfolios in our equity and fixed-income Investment Roundtable discussions.