International Outlook: It's About Companies, Not Indexes | Capital Group

International Outlook: It's About Companies, Not Indexes

In fact, it makes more sense than ever if you consider how dramatically the world has changed under the influence of free trade, global supply chains and the rapid growth of multinational corporations. In many cases, the location of a company’s headquarters is significant only in terms of regulation and taxation.

“Where a company gets its mail is not a good proxy anymore for where it does business,” explains Rob Lovelace, a Capital Group portfolio manager. “The debate over U.S. versus non-U.S. stocks made sense at one time. It served us well for 40 or 50 years but the world has changed, and investors need to change their mindset as well.”

“You really should dig into the fundamentals and find out where companies generate their revenue,” Lovelace continues. “For instance, there are many companies based in Europe that have a great deal of exposure to growing markets in the U.S., or China, or Latin America, and that explains their success far better than where they are domiciled.” Indeed, if you look at individual companies instead of index returns, you’ll find that the companies with the best annual returns each year were overwhelmingly located outside the U.S. In 2019, 44 of the top 50 stocks were based on foreign soil. Investors who opted not to go outside the U.S. missed a shot at these companies, many of which are small to mid-sized firms that don’t appear in some popular indexes.

In a year when political pressure has weighed on many U.S. health care companies, Japanese pharmaceutical giant Daiichi Sankyo was one of the top returning stocks. Likewise, Kweichow Moutai is far from a household name outside of China, but it became the world's largest spirits company by market value after its stock doubled in 2019 (through October 31).

Why fish in only half the lake?

Even among large-cap stocks, the dominant companies in a given industry often have a U.S. and a non-U.S. leader. For instance: Boeing and Airbus, Nike and Adidas, ExxonMobil and Royal Dutch Shell, Intel and Taiwan Semiconductor Manufacturing.

“In the commercial aircraft industry, Boeing and Airbus are essentially a duopoly,” notes Capital Group equity investment director David Polak. “If you only invest in the United States, you've just cut your opportunity set in half.”

In some industries, it’s tough to find a U.S. equivalent. The luxury goods business is dominated by European companies, including LVMH, which owns iconic brands such as Louis Vuitton and Christian Dior. LVMH’s leading position was underscored last month when the French giant offered $16.2 billion to acquire New York-based Tiffany & Co. The deal, the largest ever in the luxury sector, is expected to close by mid-2020.

Several innovative health care giants also call Europe home: Novartis, AstraZeneca and Novo Nordisk, to name a few. Outside Europe, the story remains valid. Japan is home to many cutting-edge robotics firms, including Murata and Fanuc. And some of the world’s most successful technology companies are based in Asia: Samsung, Taiwan Semiconductor, Tencent and Alibaba, for example.

It’s about companies, not indexes

One reason why it’s tough to judge non-U.S. companies by index returns is that regional indexes are skewed toward certain sectors. The most widely used international indexes are heavily influenced by old-economy companies in the materials, financials and energy sectors. Meanwhile, popular U.S. indexes are dominated by a few fast-growing companies.

If you remove the FAANGs — Facebook, Amazon, Apple, Netflix and Google parent Alphabet — U.S. index returns look much less impressive over the past decade. Conversely, there are a handful of technology companies in Europe, such as ASML and Temenos, that have commanded valuations on par with U.S. tech firms. 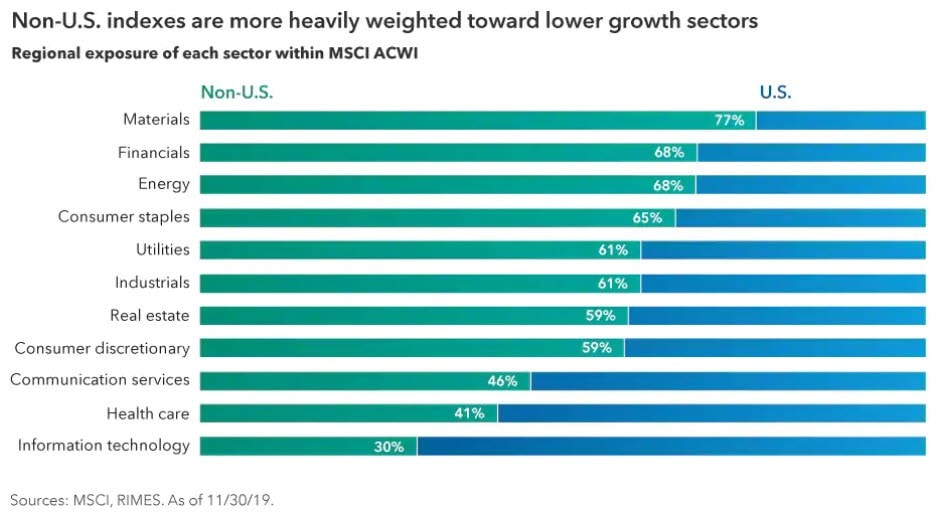 Additionally, international equities have tended to offer higher average dividend yields and generally lower valuations, compared to similar stocks in the U.S. These are attractive characteristics for investors who prefer to be more defensively positioned in a late-cycle economic environment or ahead of the next recession.

For example, global food giant Nestlé paid a 2.3% dividend, as of October 31, 2019, and it sells products that consumers crave regardless of economic conditions. It’s not alone: There are more than six times as many non-U.S. stocks that offer a dividend yield above 3%. 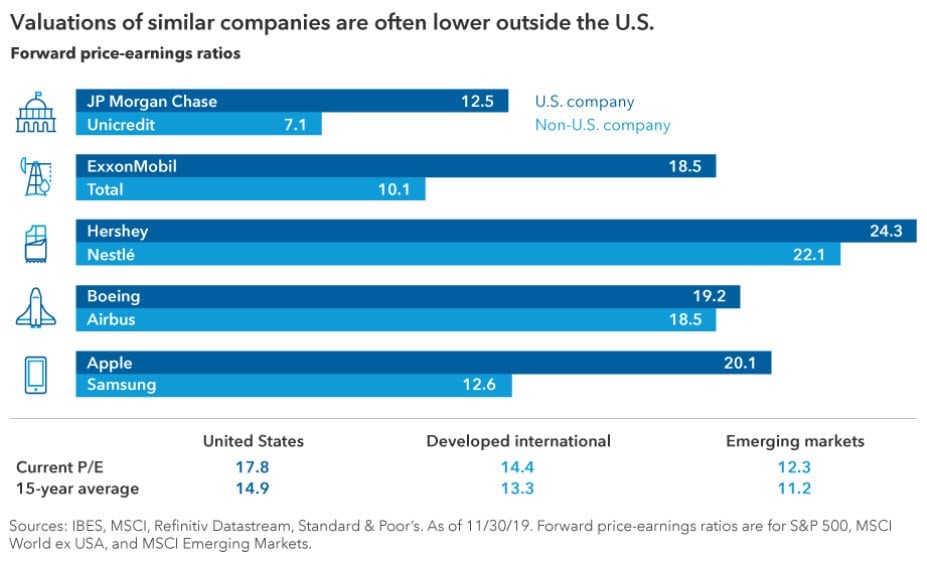 Following a volatile 2019, the outlook for international equity markets remains clouded by trade uncertainty, rising political risk and slowing economic growth in Europe, Asia and elsewhere. Heading into 2020, a challenging investment environment may be further tested by a contentious U.S. presidential election.

However, there are reasons to be optimistic about the prospects for international equity returns. Central banks around the world, including the Federal Reserve and the European Central Bank, have cut interest rates aggressively over the past few months, which should provide some level of support to struggling economies. The U.K.’s long-running Brexit drama could be resolved, one way or another, by a general election on December 12. And even a limited U.S.-China trade agreement could provide a substantial boost to markets, especially in trade-dependent economies such as Europe and Japan.

“The European economy, in particular, should gradually start to improve in 2020 as political risks diminish and as monetary and fiscal policy work their way through the system,” says Robert Lind, a Capital Group economist who covers Europe. “2019 was a tough year for the eurozone, largely due to trade disruption and economic policy uncertainty, but there are signs that the worst is over.”