The Federal Reserve’s move to lower interest rates is making history on several fronts. It was the first rate cut since the global financial crisis in 2008, the first reduction with U.S. unemployment below 4% and the first time since the dot-com era of the 1990s that central bankers decided to ease policy with U.S. stocks at or near record highs.

Unconventional monetary policy — in the U.S. and around the world — has become the norm. Policymakers at the Fed, the European Central Bank, the Bank of Japan and others are marching further into uncharted territory, confirming that the era of ultra-low interest rates is far from over.

The Fed announced that it would reduce its key policy rate by 25 basis points to a range of 2.00% to 2.25%, bringing an end to a relatively shallow tightening cycle. In all, the Fed raised rates nine times since December 2015.

Undoubtedly, the Fed will take some criticism for abandoning its previous rate-hiking plans at a time of solid — albeit slowing — U.S. economic growth and record-low unemployment. In normal times, that’s when rates are supposed to move higher. But that’s only part of the story.

“Central banks often get a bad rap, but you can’t ignore the results we’ve seen over the past decade,” says Andrew Cormack, a Capital Group fixed-income portfolio manager. “In the U.S., we’re now 11 years into an economic expansion, unemployment has fallen from 10% to below 4%, the stock market is hitting all-time highs and wages have finally started moving higher.

“During and after the financial crisis, central bankers had to be imaginative with unorthodox and experimental monetary policy,” Cormack continues. “It’s hard to argue that they’ve done a bad job. And, ultimately, investors who stayed invested have been rewarded.”

That doesn’t mean there is nothing to worry about, Cormack says. Central banks are taking aggressive steps for valid reasons — signs of slowing global economic growth, a brewing U.S.-China trade war and a stubborn lack of inflation in many developed countries. Yesterday’s move by the Fed was what Cormack calls an “insurance cut” — an attempt to get ahead of events that may put further pressure on U.S. and global growth.

In this environment, Cormack’s view is that interest rates will stay low as long as inflation does the same. For 30 years, central bankers worried about rising inflation, he notes. Today, they find themselves in the opposite position, struggling to generate inflation in the range of 2% a year. With inflation levels below target in the U.S., Europe and Japan, central banks are looking for creative ways to boost prices.

European officials have pursued that goal with urgency as the eurozone economy has weakened under the weight of trade tariffs and political turmoil. The European Central Bank introduced negative interest rates in 2014 and, last week, officials there suggested they may soon go further into negative territory in an ongoing effort to lift inflation. The ECB’s key policy rate now stands at –0.40%.

Negative interest rates have effectively pushed down bond yields across Europe and elsewhere, resulting in trillions of dollars in global bonds now trading at negative yields. That means an investor who lends to the German government, for example, is likely to lose money on the transaction. The yield on Germany’s benchmark 10-year bond stood at negative –0.43%, as of July 31, compared to positive 2.02% for 10-year U.S. Treasury bonds. 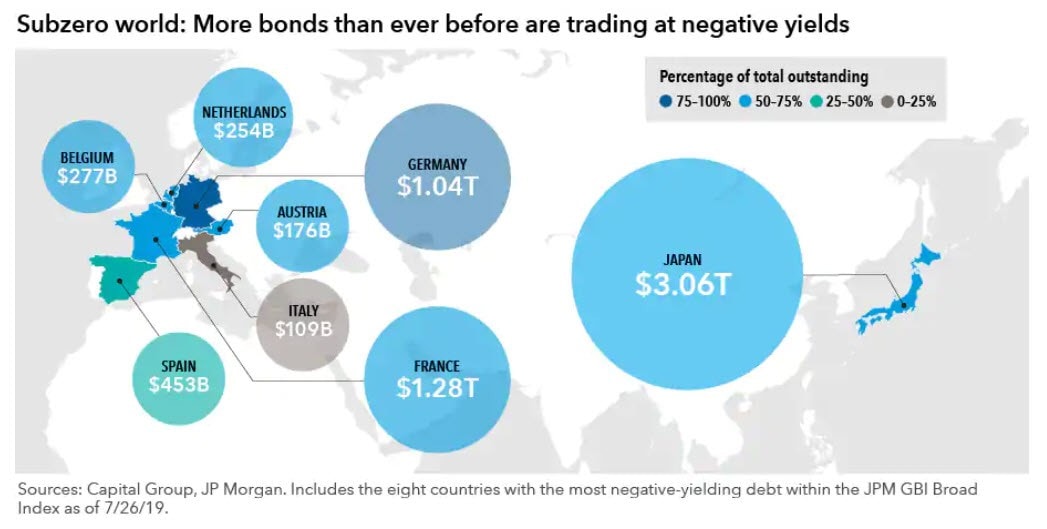 ECB President Mario Draghi led the charge toward experimental monetary policy in Europe, earning the nickname “Super Mario” in the process. His eight-year term ends in October, which raised concerns that a new ECB leader might take a different approach. However, it now appears that Christine Lagarde, the former head of the International Monetary Fund, will assume the job. That means a likely continuation of Draghi’s activist policies, including his signature pledge to do “whatever it takes.”

“Lagarde’s appointment clearly signals that more integration and growth-friendly policies are in store for the eurozone,” says Capital Group economist Robert Lind. “She now stands poised to complete the ECB’s path toward the kind of flexible independence enjoyed by other modern central banks, including the Federal Reserve and the Bank of England.”

Thus, the ECB probably will follow the Fed’s lead by cutting interest rates later this year, Lind adds. It may also resume a previously discontinued €2.6 trillion bond-buying program, known as quantitative easing. Both moves were foreshadowed by Draghi at the ECB’s meeting last week. Lagarde is expected to take over on November 1.

Not to be outdone by the Fed and ECB, other central banks around the world are following the same well-worn path to easy money. Contributing to a remarkable global easing cycle, central banks in Indonesia, South Africa, South Korea and Turkey all moved to cut interest rates in July. Earlier in the year, India, Malaysia, New Zealand and the Philippines did the same.

The Bank of Japan, an early pioneer of quantitative easing, took no action on rates at its July 29–30 meeting, but officials there continue to pursue a novel yield curve control policy targeting a 0% yield on 10-year government bonds. The BoJ already owns nearly half of the government’s outstanding debt in addition to some equity assets. China is also holding rates steady for the time being while taking other measures to boost lending and stimulate economic growth.

As the Fed begins a new rate-cutting cycle, the outlook improves for economically sensitive areas of the market. If a U.S. recession was on the near-term horizon, that event has likely been pushed back, notes Margaret Steinbach, a fixed income investment specialist with Capital Group.

In the bond market, Fed accommodation will provide support to riskier sectors, but valuations are stretched in most areas. Treasuries remain attractive primarily as a counterbalance to stocks in a well-diversified portfolio. Treasury Inflation-Protected Securities, or TIPS, may also be an excellent diversifier, she adds. “TIPS should do better in an environment where central banks are doing everything they can to boost inflation,” Steinbach says, “and TIPS are also attractively valued at the moment.”

Outside a core bond allocation, areas of the market that were hurt during the Fed’s rate-hiking cycle are another place to look for value, she adds. That would include emerging markets debt, which has struggled in recent years under the weight of higher interest rates and a strong U.S. dollar. 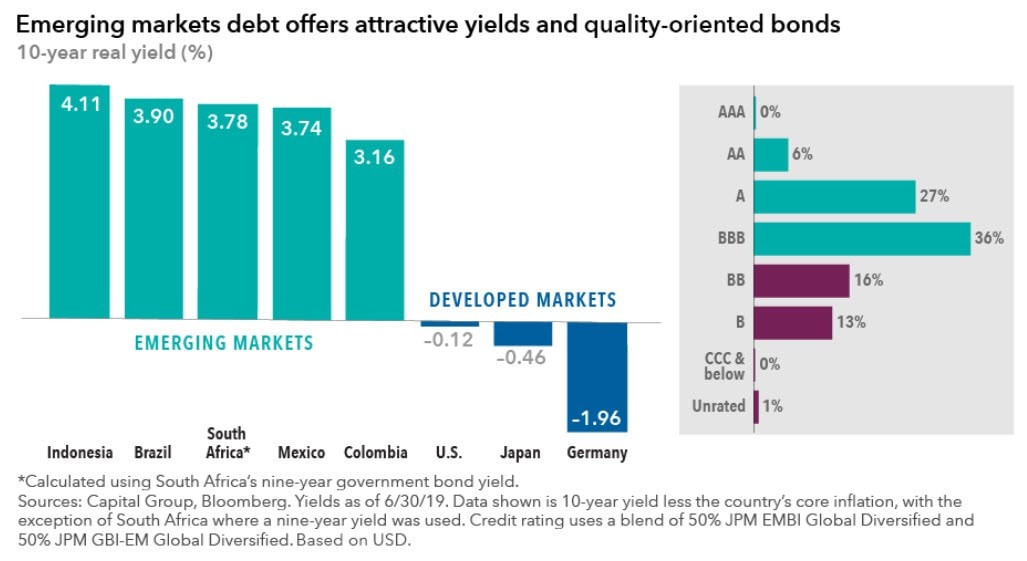