It used to be fairly easy to identify defensive stocks. They were reliable, conservative, boring investments in the consumer staples, utilities and health care sectors. These companies generated steady cash flow, paid solid dividends and didn’t have “dot-com” in their names.

More recently, however, there’s been a discernable shift in investor views of what constitutes a defensive stock. Many businesses that were previously considered defensive — including food, tobacco and telecommunications firms — have been disrupted by technology advancements, changing consumer behavior and fierce competition in a global economy.

As investors search for defensive stocks ahead of the next recession, they may find that a broader definition is warranted.

“A defensive stock is one in which a company’s earnings and revenues have the potential to hold up fairly well during a recession,” explains Alan Wilson, a Capital Group portfolio manager.

“So the key question is, will the companies that have displayed defensive characteristics in the past continue to do so in the future? I’m not so sure about that,” Wilson says. “It may depend a great deal on the cause of the next downturn.”

For decades, food companies have been considered classic defensive investments. People need to eat, right? Indeed, during the global financial crisis in 2008–2009, some food-related companies held up relatively well compared to the overall market, including McDonald’s, Panera Bread and Walmart. But that was before the business faced disruption from new entrants like Amazon, changing consumer tastes, massive consolidation and competition from online food delivery startups.

Kraft Heinz is one example of a food industry giant that stumbled as consumers increasingly embraced fresh food and organic options over processed products. In February, Kraft Heinz took a $15.4 billion write-down on the value of some of its struggling brands, which include Velveeta, Maxwell House and Miracle Whip. The company also cut its dividend by 36%.

"Traditional industries like the food business face some challenges and may not be as defensive as we once thought,” says Jonathan Knowles, a Capital Group portfolio manager. “Like so many other industries, it’s going through a period of disruption that is altering the investment landscape.”

Is the best defense a good offense?

Knowles believes the definition of a defensive stock has changed in recent years. It may now include companies with strong earnings growth, innovative products, pricing power and the ability to shake up the status quo in established industries.

“Lots of people might disagree with me,” Knowles says, “but I would argue that a company like Google parent Alphabet has some defensive characteristics, based on its cash flow and dominant position in the internet search market.” Knowles puts Facebook in this category, as well.

These are growth-oriented companies by most measures, Knowles adds, but they may still hold up well in a sustained downturn based on their robust earnings potential, ability to innovate and relatively attractive valuations.

“In some of the relatively minor market downturns we’ve seen in recent years, there are many examples of quality growth companies that have done better than the overall market,” Thompson explains. “They tend to be companies with strong management and solid balance sheets that can navigate through difficult environments.”

Moreover, some growth-oriented stocks can show countercyclical characteristics. One example is CME Group, the Chicago-based exchange company that facilitates trading in derivatives, options and futures. CME’s revenue has tended to rise during periods of extreme market volatility. 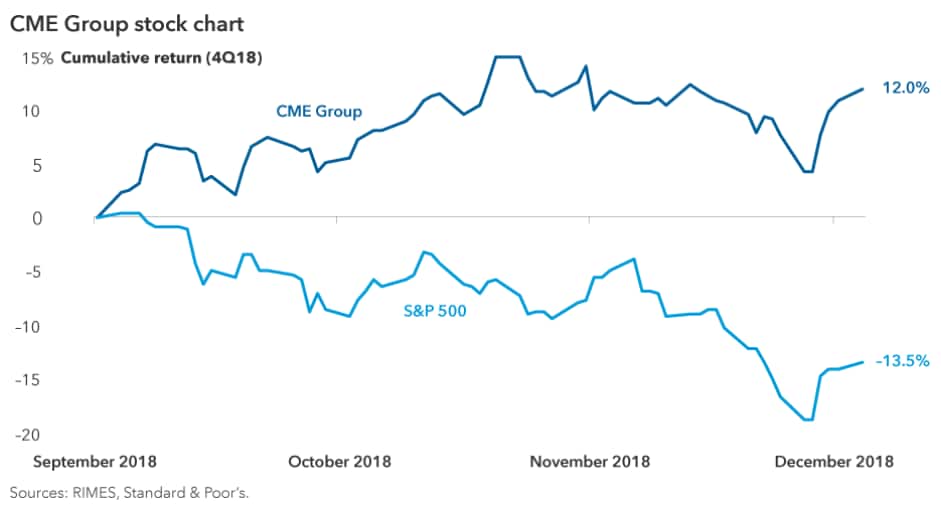 Utilities stocks may also maintain solid defensive characteristics in a downturn, provided they are run by competent, experienced management teams and operate in a market with a stable or growing population.

Search for quality dividends instead of “value”

Just as it used to be easier to identify defensive stocks, it also used to be relatively straightforward to pick a defensive investment strategy for your portfolio — just shift to a value-oriented index and call it a day.

But it’s important for investors to understand that value stocks aren’t always defensive. For example, many stocks that are included in popular value indexes don’t pay dividends and don’t have high credit ratings. About 22% of stocks in the Russell 1000® Value Index paid dividends of less than 0.1% in 2018, and roughly 40% of the rated companies in that index carried ratings of BBB– or lower. Companies with questionably high debt levels are also not uncommon. 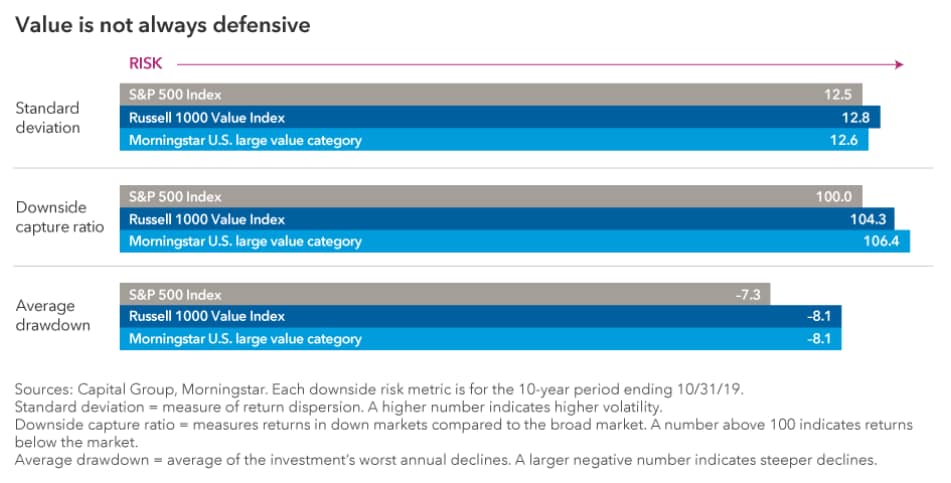 A missed debt payment or a ratings downgrade could send share prices tumbling. A better strategy may be to focus on higher quality companies that are more likely to maintain consistent dividend payments, says Capital Group portfolio manager Joyce Gordon.

Joyce Gordon is a portfolio manager with 38 years of investment experience. She holds an MBA and a bachelor’s degree in business finance from the University of Southern California.

Jonathan Knowles is a portfolio manager with 27 years of investment experience. He has an MBA from INSEAD, France, as well as a Ph.D. in immunovirology and a bachelor's in veterinary science from the University of Liverpool, U.K.

Lisa Thompson is a portfolio manager with 30 years of investment experience. She has a bachelor’s in mathematics from the University of Pennsylvania and is a CFA charterholder.

The Morningstar U.S. large value category measures the performance of large-cap value funds of the U.S. equity fund universe. ©2019 Morningstar, Inc. All rights reserved. The information contained herein: (1) is proprietary to Morningstar and/or its content providers; (2) may not be copied or distributed; and (3) is not warranted to be accurate, complete or timely. Neither Morningstar nor its content providers are responsible for any damages or losses arising from any use of this information. Past performance is no guarantee of future results.