Coronavirus Outbreak: What it Means for Markets | Capital Group

Coronavirus Outbreak: What it Means for Markets

As Chinese authorities deal with a rapidly spreading coronavirus, investors are raising questions about the potential impact on global economic growth and the financial markets. While much is still unknown about the extent of the outbreak — and, crucially, how long it may last — the initial drag on China and other emerging markets is starting to come into focus.

China’s economy was already growing at the slowest rate in 30 years before reports of the outbreak first emerged in the central China city of Wuhan. Since then, the Chinese government has placed a dozen cities under quarantine, shut down businesses and schools, and restricted travel in the affected regions. More than 7,700 infections have been reported as of January 30, including a small number in the U.S., Europe and other parts of Asia.

To get a handle on how the outbreak is affecting global economic conditions, we talked to two Capital Group investment veterans who are based in Hong Kong, as well as one of Capital Group’s U.S. economists.

“Given the quarantine lockdowns, it’s highly likely that the numbers of infected people in mainland China are significantly underestimated,” says Stephen Green, a Capital Group economist based in Hong Kong, “especially in rural areas where medical facilities are limited.

“Depending on how long it takes to contain the coronavirus, we should expect to see sizable declines in consumer spending and manufacturing activity at least through the end of February,” Green adds. “I wouldn’t be surprised if China’s first-quarter GDP growth falls below 6% and some Wall Street estimates are as low as 5%, which is certainly in the realm of possibility.”

Outside China, the biggest economic impact is expected be in Thailand, which relies heavily on Chinese tourism. Among industries, travel and tourism throughout Asia will likely take a significant hit, Green explains, along with sales of luxury goods. In addition, many events associated with China’s Lunar New Year have been canceled. Energy stocks also have fallen sharply as investors expect oil prices to decline further amid lower demand from China. 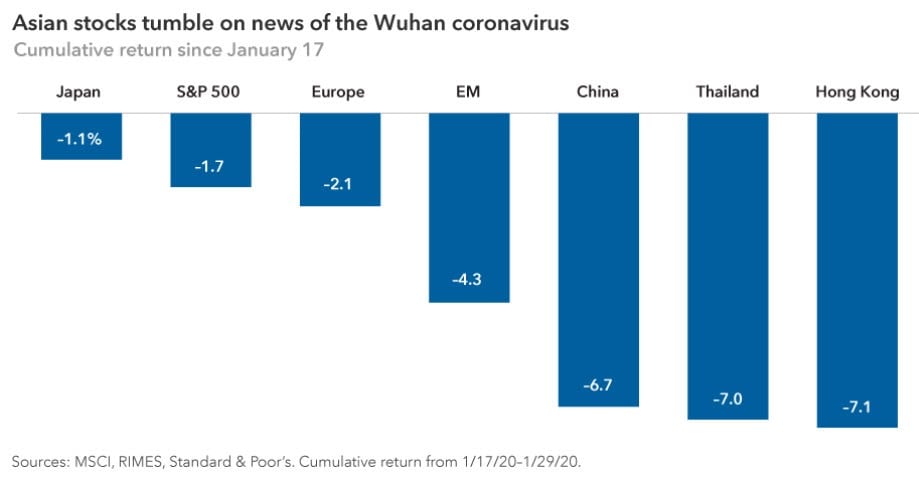 Since news reports about the virus accelerated around January 17, emerging markets stocks have declined by about 4%, as measured by the MSCI Emerging Markets IMI. Chinese stocks are down more than 6% and Thai stocks slipped 7%. By comparison, the MSCI World Index declined 1.3% during the period through January 29.

What about the U.S.?

U.S. stocks, meanwhile, have lost about 2% on worries that the outbreak could have a spillover effect on the U.S. economy, potentially impacting American companies that do business in China. Starbucks has closed about half of its 4,300 stores in China. Many U.S.-based airlines are also canceling flights to the country. And there are growing concerns about supply-chain disruptions for companies such as Apple that have significant manufacturing operations there.

Coupled with Boeing’s recent troubles returning the 737 MAX jet to service, the outlook for the U.S. economy now looks more uncertain than it did just a few weeks ago, says Capital Group U.S. economist Jared Franz. Fourth-quarter U.S. GDP growth came in at 2.1% on an annualized basis, according to Commerce Department figures released on Jan. 30.

“If 737 MAX production remains grounded through July, then I estimate the impact on first-half GDP growth will be roughly –0.5 percentage points,” Franz says. “The economic impact of the coronavirus on the U.S. is more difficult to calibrate, but I expect it to be modest and mostly felt through trade disruption and financial linkages.”

Assuming the outbreak is contained soon, Franz said it’s likely global economic growth will experience a V-shaped recovery characterized by slower growth in the first half and a significant acceleration in the second half of the year. The U.S. economy will probably follow the same course.

“U.S. economic fundamentals remain sound, labor markets are resilient and the Federal Reserve stands ready to take action as needed,” Franz adds. “The coronavirus looks to be a modest but temporary restraint on U.S. economic activity via secondary channels of impact, but should not derail my growth expectations of roughly 2% in 2020.”

That’s similar to the pattern shown after the SARS outbreak that hit China in 2002 and 2003. Key indicators bounced back quickly after the virus was contained. Many investors are looking at the SARS event as a template for what might happen in the weeks and months ahead — although it’s important to note that there were many other factors during that time period, including the aftermath of the 9/11 attacks and the U.S. invasion of Iraq in 2003. 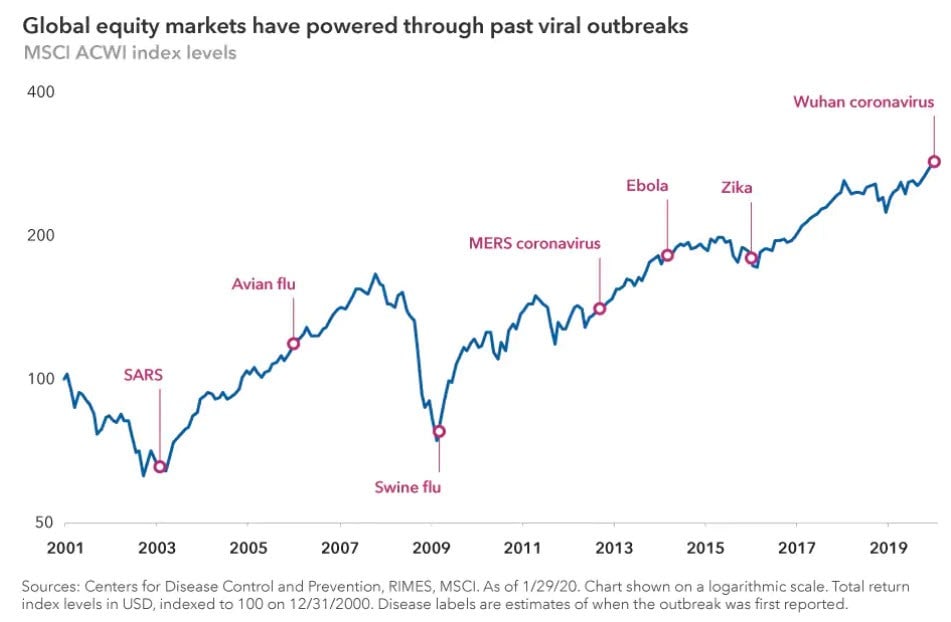 In addition, the structure of the global economy was significantly different. The Chinese economy was largely investment-driven at that time. Consumer spending is a much larger percentage of total economic output today. Travel and tourism activity also was much lower than it is now, with Chinese tourism skyrocketing over the past decade.

“The situation today is very reminiscent of SARS, which we lived through here in Hong Kong 17 years ago,” Watson explains. “The uncertainty was extremely high during the SARS outbreak and it was certainly a difficult time for many people, but once it was over, the following relief rally was powerful.”

As with any large-scale crisis, long-term investors should look for select opportunities that may be generated by a near-term loss of confidence, Watson says. “This is when long-term thinking, on-the-ground research and a focus on value can make a meaningful difference.”

Stephen Green is an economist covering Asia. He has 16 years of investment industry experience. Prior to joining Capital in 2014, he was head of research for Greater China at Standard Chartered Bank in China and Hong Kong. Before that he ran the Asia program at Chatham House, the U.K. think tank. He holds a PhD in government from the London School of Economics and an honors degree from Cambridge.

Jared Franz is an economist covering the U.S. and Latin America. He has 15 years of investment experience. Prior to joining Capital in 2014, Jared was head of international macroeconomic research at Hartford Investment Management Company and an international and U.S. economist at T. Rowe Price. He holds a PhD in economics from the University of Illinois and a bachelor's from Northwestern.