Answers to Your 5 Biggest Interest Rate and Bond Questions

Stock markets around the world have continued to sell-off amid concerns that emergency measures by central banks and fiscal stimulus from governments will fail to ward off a global recession caused by the coronavirus outbreak.

The lack of liquidity in areas of bond markets and pricing discrepancies in pockets of the exchange-traded funds (ETF) markets led the Federal Reserve to act over the weekend of March 14 with extraordinary measures to stabilize the economy. It delivered a package that is larger in aggregate than any single move in the past. The stimulus measures included a cut in the benchmark interest rate to near zero — the second emergency rate cut this month. In addition, the Fed announced a $700 billion program to purchase Treasuries and mortgage-backed securities. It also cut the rate charged to banks for short-term emergency loans from its discount window and said it would activate swap lines with five other central banks.

On March 17, the Fed announced a further measure to help companies with short-term funding to purchase commercial paper through a special credit facility. Fiscal stimulus may be on the way to help calm markets as well, with news reports suggesting that the Trump administration is pursuing a massive $850 billion stimulus package.

The bond market is in uncharted territory. The 30-year U.S. Treasury yields recently touched yields below 1%, and the 10-year dipped below 0.5% for the first time. Against this backdrop, Mike Gitlin, head of fixed income at Capital Group, and Pramod Atluri, a fixed income principal investment officer at Capital Group, discuss fixed income markets and the outlook for interest rates.

1. What is your outlook for interest rates, and what are your expectations from the Federal Reserve?

We believe the Fed will continue to act to support financial markets and the real economy in the coming weeks and months. As 2020 began, the market expected a pretty uneventful year from the Fed. Economic growth looked to be improving as U.S./China trade tensions eased and employment growth remained healthy.

Then the outbreak of COVID-19 and the extraordinary efforts to contain it changed everything. As the virus spread and its deadly nature became more evident, this initial supply disruption morphed into a massive demand disruption as businesses and consumers began to self-quarantine, leading to reduced travel and consumption. This was compounded by an oil price war between Saudi Arabia and Russia that led oil prices to fall more than 25% in a day, causing yet another disruption to financial markets.

Interest rates have fallen and credit spreads have widened, leading to a tightening of financial conditions. If left unchecked, this would hurt both businesses and consumers, and ultimately worsen the economic outlook.

In response, the Fed made its emergency rate cut of 0.5 percentage points on March 3, bringing the monetary policy rate down to 1%–1.25%. Despite the cut, financial conditions have further deteriorated as equity prices and credit spreads have continued to weaken. We believe the Fed will continue to act to support the economy using a variety of tools at its disposal, including additional rate cuts, a commitment to keeping rates low for the foreseeable future and potentially more large-scale asset purchases known as quantitative easing.

2. Do you think the Fed could eventually cut rates in the U.S. to zero? If it does, what other tools could it employ?

Given the rapidly worsening economic outlook, we believe the Fed will cut rates by 0.5-1 percentage points in the coming months. With the federal funds rate currently in a range from 1% to 1.25%, this would put rates relatively close to zero, back to where it reduced rates in response to the 2008 financial crisis.

If the Fed cuts rates to the zero bound, it will likely lean on other tools before it considers joining other global central banks in adopting a negative interest rate policy. Those tools include: 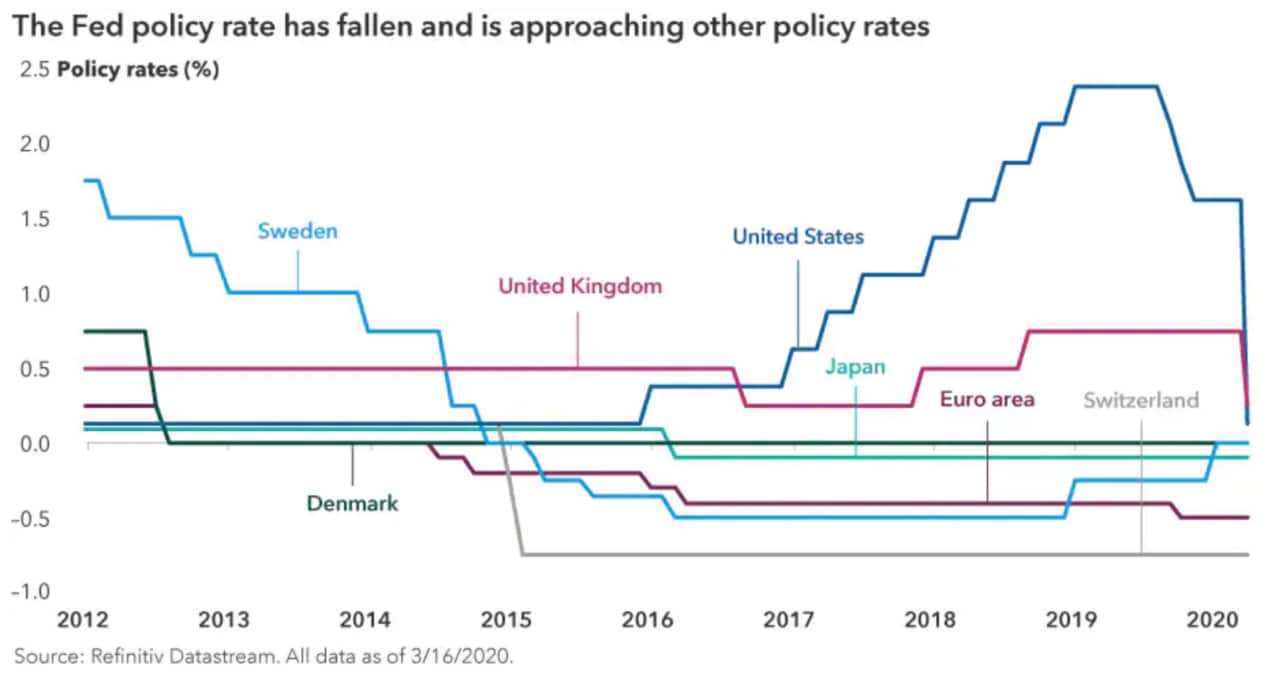 3. What is your outlook for credit? How do you distinguish between investment grade and high yield?

In times of enhanced uncertainty and volatility, the flight to quality is high and investors seek safety in U.S. Treasuries. If you look at credit markets, both high-yield and investment-grade bonds, the risk premium investors demand over Treasury yields can rise significantly. Corporate bonds tend to have a greater correlation to equities, so when equities decline in value, these bonds historically also decline, and high-yield bonds fall (credit spreads widen) typically much more than investment grade.

Given significant market volatility and the rapidly declining economic outlook, we are very cautious on the outlook for credit. We believe there are many scenarios where credit may continue to weaken before markets stabilize and prices improve. Over the past decade, corporations have tapped into the low interest rate environment and taken on a large amount of debt. Many companies are highly leveraged and will be vulnerable if credit spreads continue to widen. It is important to be very discriminating in the credit space, considering the increasing leverage we have seen over the past few years.

Overall, in our broad fixed income portfolios, we have generally had a long duration exposure, which translates into an exposure to interest rates, and a less-than-benchmark exposure to credit and mortgage-backed bonds. However, valuations are changing rapidly, and we are also likely to see a significant series of steps to help support markets and the economy from both central banks and fiscal authorities. Therefore, our analysts and portfolio managers look to take advantage of volatile markets to find investments in credits they like at more attractive valuations. 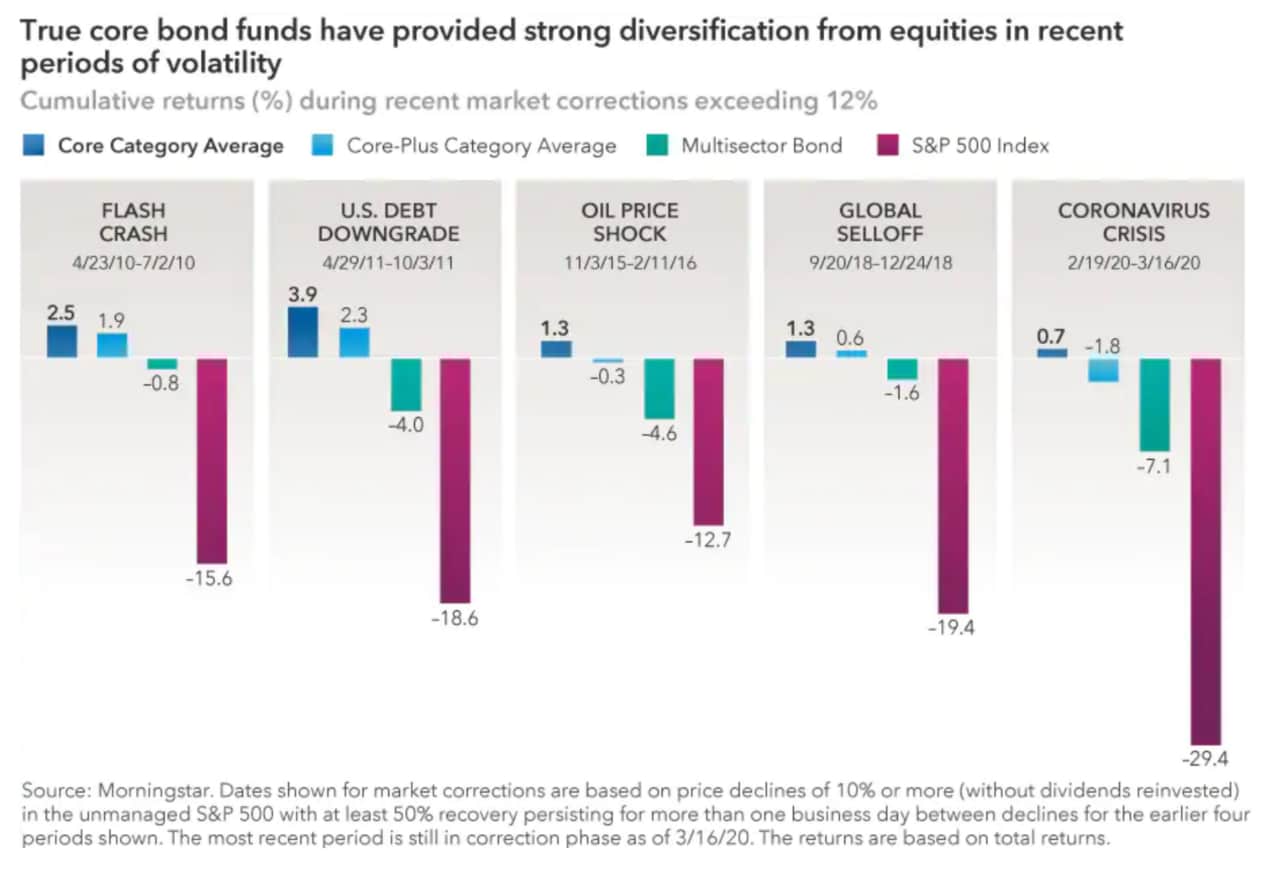 4. Given that we are in an environment facing constraints on both the supply side and the demand side of the economy, should investors brace for a recession in the U.S.?

Our economists believe that the U.S. has been in the late part of its economic cycle for some time. Before COVID-19 hit, investors anticipated modest growth might persist over the medium term. But the outbreak of COVID-19 and the Saudi/Russia oil shock are rapidly changing the economic outlook.

Suddenly, investors are faced with a grave new uncertainty that has caused significant disruptions. On the supply side, factories are experiencing stoppages and both supply chains and global trade have been disrupted. On the demand side, nervous consumers and businesses may not spend as much as they would in normal times. And given the oil price collapse, the market is bracing for another wave of defaults from related sectors. This could particularly affect energy sector issuers in the high-yield market, as many of those issuers are already starting with more stretched balance sheets.

The probability of a recession has increased dramatically from where it was just a few weeks ago. The U.S. is already in the late part of its economic cycle, so it’s more susceptible to falling into a recession due to a painful external shock like the one we’re seeing now. Investors should expect a period of heightened volatility.

5. How should bond portfolios be positioned?

The recent drop in equities and rise in price of 10-year Treasuries is a timely reminder that high-quality bonds can help to stabilize investor portfolios against losses during volatile periods. In times of great uncertainty, investors should look to bond funds first and foremost as a way to diversify their portfolio and preserve capital. But not all bonds or bond funds are created equal. There are many broad bond funds which own significant amounts of lower quality bonds that may not provide the protection and stability investors need when risk assets decline.

We look to high quality bonds, like U.S. government bonds, AAA-rated mortgage bonds and investment-grade corporate credit, to prepare for volatility. These bonds have historically been more resilient when shocks occur, helping to preserve investors’ capital while also providing some income.

While it can be tempting to increase holdings of riskier bonds like high-yield corporate debt in a reach for yield as interest rates fall, it is important that investors know that high-yield bonds can be highly correlated to equities. When equity prices fall, so do many high-yield bonds, which means investors have not really reduced risk in their overall portfolio.

Consider the five deepest equity market corrections — those where the S&P 500 Index lost at least 12% — since the financial crisis ended. In each one, higher quality bond funds experienced solid absolute returns, on average. Importantly, during these stressed equity periods, higher quality funds as represented by the Morningstar U.S. Intermediate Core category experienced stronger returns than the Intermediate Core-Plus and Multisector Bond categories that tend to be much more exposed to the higher risk end of high-yield bonds. 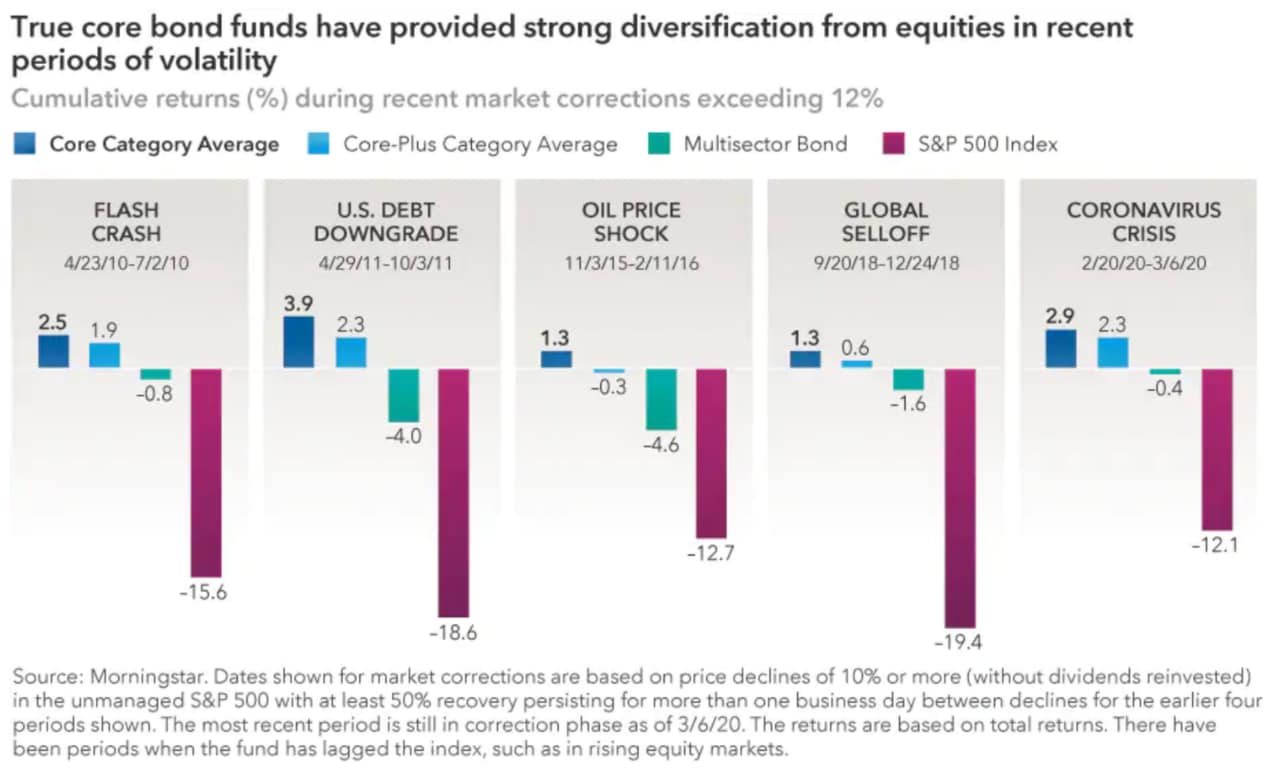 This demonstrates how a strong core bond allocation can act as a ballast in an investor’s overall portfolio. A fixed income allocation should zig when stocks zag to provide some shock absorption.

This present episode of market volatility is not unique. Long-term investors know that bouts of volatility are a constant in the market. Even if the current scare fades, another will eventually take its place — and a recession at some point is inevitable. For this reason, we encourage investors to take a long-term view when making investment decisions.

Bond ratings, which typically range from AAA/Aaa (highest) to D (lowest), are assigned by credit rating agencies such as Standard & Poor's, Moody's and/or Fitch, as an indication of an issuer's creditworthiness. If agency ratings differ, the security will be considered to have received the lowest of those ratings, consistent with the fund's investment policies. Securities in the Unrated category have not been rated by a rating agency; however, the investment adviser performs its own credit analysis and assigns comparable ratings that are used for compliance with fund investment policies.

The return of principal for bond funds and for funds with significant underlying bond holdings is not guaranteed. Fund shares are subject to the same interest rate, inflation and credit risks associated with the underlying bond holdings. Investments in mortgage-related securities involve additional risks, such as prepayment risk, as more fully described in the prospectus. Higher yielding, higher risk bonds can fluctuate in price more than investment-grade bonds, so investors should maintain a long-term perspective.

© 2020 Morningstar, Inc. All rights reserved. The information contained herein: (1) is proprietary to Morningstar and/or its content providers; (2) may not be copied or distributed; and (3) is not warranted to be accurate, complete or timely. Neither Morningstar nor its content providers are responsible for any damages or losses arising from any use of this information. Past performance is no guarantee of future results.