The Rise of the Cloud Is Transforming the World | Capital Group

The Rise of the Cloud Is Transforming the World

Ever wonder how smartphones can perform so many functions so seamlessly, from sending email to storing photos to playing movies? Part of the answer is that cell phones are compact technological wonders. The other part is that phones often get little-noticed assists from large computers located hundreds or even thousands of miles away. These distant computers are known collectively as “the cloud,” and they represent a meaningful shift in the digital ecosystem.

One of the most visible trends over the past few decades is that digital devices have gotten progressively smaller. The bulky mainframes that companies once crammed into basements and perpetually chilly computer rooms have given way to nimbler desktops and laptops. Among consumers, smartphones are a worldwide object of affection. But although the devices themselves have slimmed down, the need for mammoth computers toiling behind the scenes is as great as ever. The swirl of data splashing around in today’s digital vortex requires individuals and businesses to secure immense processing power, speed and storage. Those functions come from networks of servers located remotely — hence, the term “cloud” — and accessed over the internet.

Cloud computing is projected to surge as companies continue to migrate from legacy systems and individuals require lightning-fast speed for video and other bandwidth-heavy functions. This bodes well for the providers of cloud infrastructure services, with the market expected to balloon from less than $50 billion last year to nearly $350 billion in 2028, according to Capital Group estimates.

“The market opportunity is really enormous,” says Mark Casey, a Capital Group equity portfolio manager. “Cloud computing is the most compelling long-term-growth story I know of.” Though consumers may not realize it, the cloud has become a routine element of digital existence over the past decade. Anyone who accesses email, backs up cellphone photos, signs on to social media or streams movies is probably tapping into the cloud. And such reliance on remote computers is likely to grow as everything from cars that pilot themselves to refrigerators that automatically reorder milk incorporate backstage analytical features.

“The cloud is everywhere,” says Cheryl Frank, an equity portfolio manager at Capital Group Private Client Services. “If you use a smartphone, you’re basically using the cloud. If you watch Netflix, you’re using the cloud.”

A new way to do business.

For companies that are switching from legacy systems, two of the cloud’s biggest attractions are simplicity and cost savings. Businesses can essentially outsource technology — data storage, software purchases and processing muscle — just as they have many other functions. They avoid up-front outlays for hardware and software that quickly become obsolete. And there’s no need for jumbo information technology departments to oversee every facet of an in-house system.

Companies also gain agility. They typically pay only for the storage capacity and computing power they use, allowing them to quickly scale up for projects or test new ideas. Cloud service providers also handle security, a critical issue in the wake of highly publicized hacking incidents at prominent companies.

Cloud providers “have literally hundreds of people, many with Ph.D.s in computer science, and the only thing they do is secure the systems from attacks by hackers,” Casey says. “Almost no individual corporation has anywhere near that type of security effort.”

Increasingly, businesses are also attracted by next-generation functions, such as data analytics and machine learning, that previously were impossible or prohibitively expensive. In other words, the cloud allows companies to undertake new tasks that can help their businesses grow. A consumer brand, for example, could roll out precision-targeted marketing campaigns, and a medical provider could better decode health patterns to improve treatments. 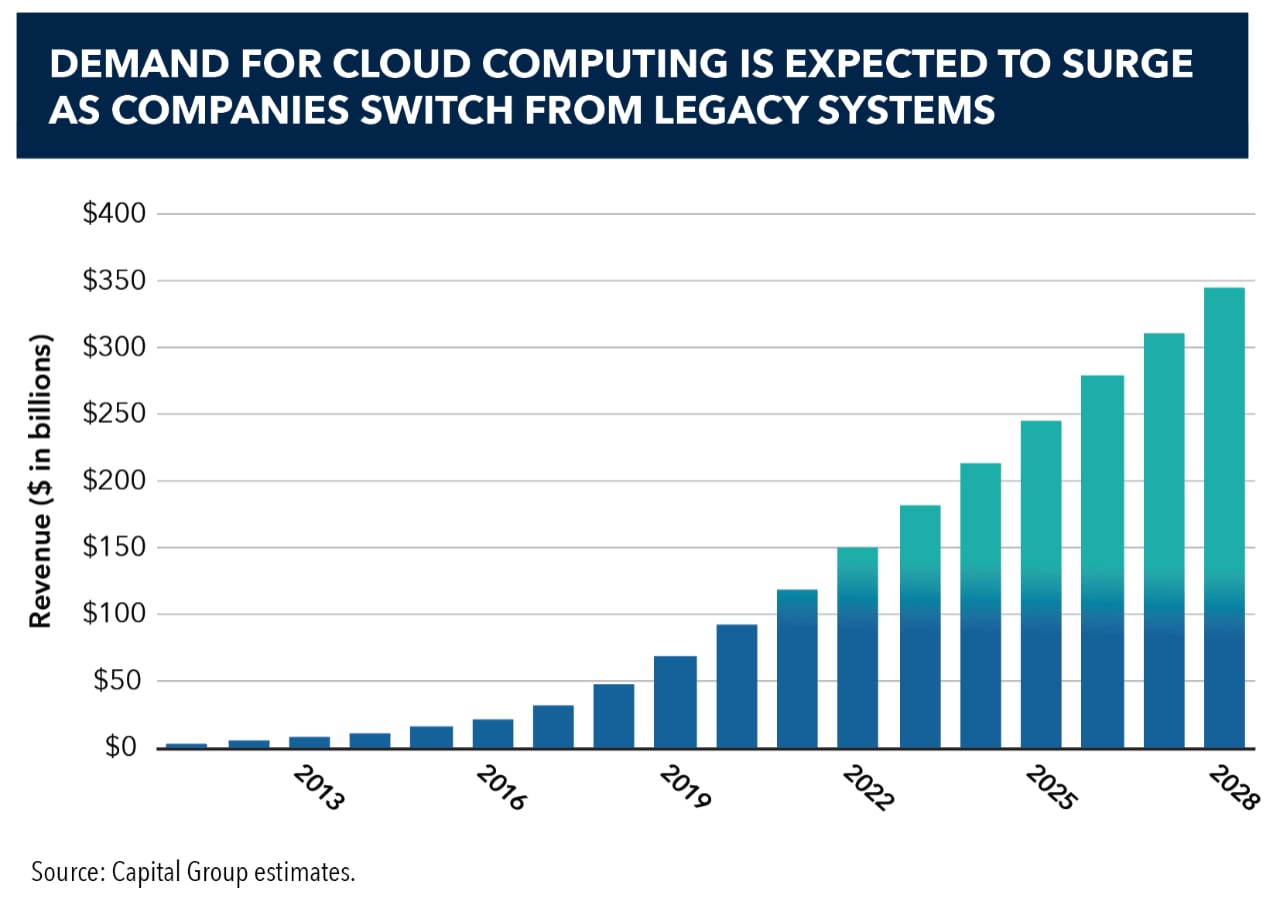 “There is a shift toward creating value from the cloud rather than simply reducing IT costs,” says Capital Group analyst Jessica Spaly. “Companies can do things to drive growth in their business they could not before and in many cases create tremendous value.”

Beyond ballooning demand for their offerings, the companies that provide cloud services have several advantages. The first is subscription-based business models. Instead of making one-time purchases, clients pay monthly fees for ongoing service. Those recurring charges translate to highly dependable revenue streams for cloud providers. And customers are “sticky” — once they have gone to the trouble of setting up service and migrating data, they’re unlikely to switch providers.

The outlook is bright for the two basic types of cloud companies: infrastructure providers, which rent computer space and processing power, and software purveyors, which sell products such as enterprise management. Infrastructure providers have the added benefit of limited competition. A handful of companies dominate the space, and the daunting cost of buying equipment and coaxing clients to switch providers discourages would-be rivals.

Of course, there are potential risks, the biggest being a headline-generating hack or an extended service outage. The providers’ security records are very good, Casey says, but a breach could badly scuff a company’s reputation.

Still, the industry’s prospects appear to be extremely promising as companies move more of their operations into the cloud.

“This is part of the long-term evolution of technology,” Frank says. “There’s a lot of growth ahead.”