The deadline for the U.K.’s long-awaited withdrawal from the European Union is March 29. And yet the path forward is no more certain today than it was in the summer of 2016, when British voters narrowly approved a referendum calling for this historic decoupling. So far, the British pound sterling has suffered most of the consequences, falling roughly 11% against the U.S. dollar.

Between now and the end of March, the consequences could be even more severe if U.K. and EU leaders cannot agree on a reasonable withdrawal plan. The British Parliament rejected one such plan by a wide margin last month. That defeat has triggered unprecedented political uncertainty. 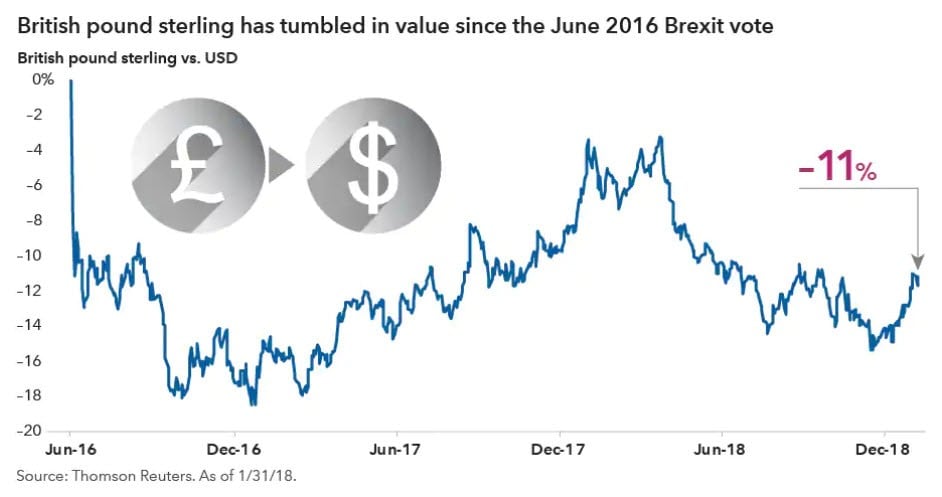 1. U.K. and EU leaders agree to extend the deadline.

A delay is nearly unavoidable at this point because there isn’t much time left to renegotiate the terms of withdrawal. While some EU leaders have insisted they are not willing to give the U.K. more time, they may have no other option. If the U.K. leaves without an agreement — the so-called “no deal” Brexit — then virtually everyone loses. (See scenario #3.) Additional time opens up more options, which could lead to a number of other outcomes.

A new vote is coming. What’s not certain, however, is who will cast that consequential vote. Depending on the length of the delay, several options are on the table. These include another parliamentary vote on an amended withdrawal agreement, a general election that may reconfigure the House of Commons, or even a second nationwide referendum that could reopen the entire Brexit question. We think an amended withdrawal is the most likely path.

3. The U.K. abruptly leaves in a no deal Brexit.

This would be the most difficult outcome. And it would come with the highest level of uncertainty since it would mean that the U.K./EU relationship has broken down. If it were to happen, the U.K. would revert to World Trade Organization rules governing international commerce, severely limiting the free flow of goods, services and people to and from the U.K.

Under a no deal Brexit, some independent estimates suggest there would be a steep decline in trade between the U.K. and its closest EU neighbors: Ireland, France, the Netherlands, Denmark and Germany. This scenario almost certainly would lead to a further slide in the value of the pound and a sharp selloff in the shares of companies that are highly exposed to the domestic U.K. economy or trade with the EU.

Once we move past the near-term challenges described above, the medium- and long-term implications are more quantifiable. We believe the U.K. will indeed leave the EU, if not on March 29 then at some point in the near future. The extent of the economic impact will depend on how closely the U.K. remains aligned with the EU’s single market and customs union. The U.K. economy has benefited from decades of unfettered regional trade; its most important trading partners remain the other 27 members of the EU.

If the U.K. opts to move further away, the cost could reveal itself in diminished trade activity, weaker economic growth and ultimately a lower standard of living. Some companies may decide to relocate their facilities to the EU, as several multinationals have warned, and others may choose not to expand into the U.K.

Over long periods of time, stock prices tend to move roughly in line with GDP growth. That doesn’t bode well for the long-term outlook for U.K. stocks in aggregate. However, we see a bifurcated market in the years ahead. Companies with large exposure to the domestic U.K. economy — such as banks, retailers and utilities — may have a more difficult road than multinational corporations that happen to be based in the U.K.

Some of the U.K.’s largest publicly-traded companies fall into this category, including oil giant BP, drugmaker GlaxoSmithKline and alcoholic beverages firm Diageo. To use Glaxo as an example, the company generated worldwide revenue of £30.2 billion in 2017, according to its most recent annual report. About £22 billion, or nearly 75%, of that revenue came from the United States and other non-European markets. The U.S. also was Glaxo’s biggest growth market, with sales rising 10% from the previous year while European sales were flat. Revenue attributed to the U.K. was just £940 million.

Brexit should have little to no impact on the long-term outlook for several large, multinationals based in the U.K. For certain other U.K. companies, however, Brexit could be quite meaningful in terms of revenue growth, future profitability and supply chain management. From an investment perspective, that means fundamental, bottom-up analysis of U.K. companies and their sources of revenue will be critical to identifying potentially attractive long-term opportunities.

Rising political uncertainty is a theme that investors probably will be living with for a decade or more. It is a generational issue, in our view, and a significant departure from the relatively stable politics of the post-Cold War era. If there ever was a time when investors could ignore politics and still prosper, that time has come to an end. The events of the past two years have made it clear: Political analysis and fundamental investment analysis are now two sides of the same coin. 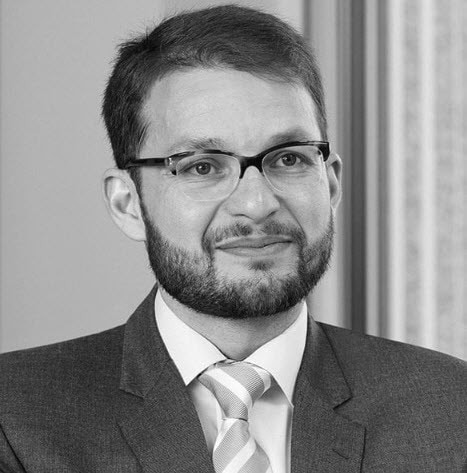 Talha Khan covers the euro zone and broader political issues. He has 10 years of investment experience, all with Capital. He holds a master's in international political economy from the London School of Economics and a bachelor's in economics and political science from Macalester College in Minnesota. Robert Lind has 31 years of industry experience, two with Capital Group. He previously worked as group chief economist at Anglo American and was head of macro research at ABN AMRO. He earned his bachelor's degree at Oxford.