Of the many factors that have propelled the fixed-income market, none has been more important than low interest rates. For much of the past decade, global central banks kept a lid on rates in hopes of jump-starting their countries’ economies. Those efforts had an impact, with growth picking up first in the U.S. and more recently in Europe and Japan. Bond investors, of course, welcomed declining rates because they boosted returns and provided a general sense of comfort to the market.

The backdrop has gotten a bit cloudier lately. Improvement in the global economy has prompted central banks to throttle back on easy-money policies, while accelerating wages have stoked concerns about inflation. The resulting rise in yields has jostled the market and sparked fear that bond returns could be pinched.

Though volatility is always unsettling, I believe the consternation is overblown. Investors have focused on the directional change in rates from their extraordinary lows while overlooking the actual size of those moves, which have been quite moderate. Most notable, the 10-year Treasury yield ended the first quarter at 2.74%, less than half a percentage point higher than it was at this time last year.

Certainly, rates may rise further if the global economy continues to gather momentum. As Capital Group economist Darrell Spence notes in the previous article, inflation is expected to edge up, but at a gradual pace from the uncharacteristically low levels of recent years. Barring something unforeseen, I believe that any rise in bond yields will also be slow and orderly; the forces that would have to come together to push rates up dramatically are not present at the moment. Overall, I expect the “lower for longer” dynamic that has held sway in the fixed-income world for much of the past decade to remain in place. The markets are also factoring in this potential, with forward pricing for the 10-year U.S. Treasury only showing a 20 basis point increase in yields two years from now. 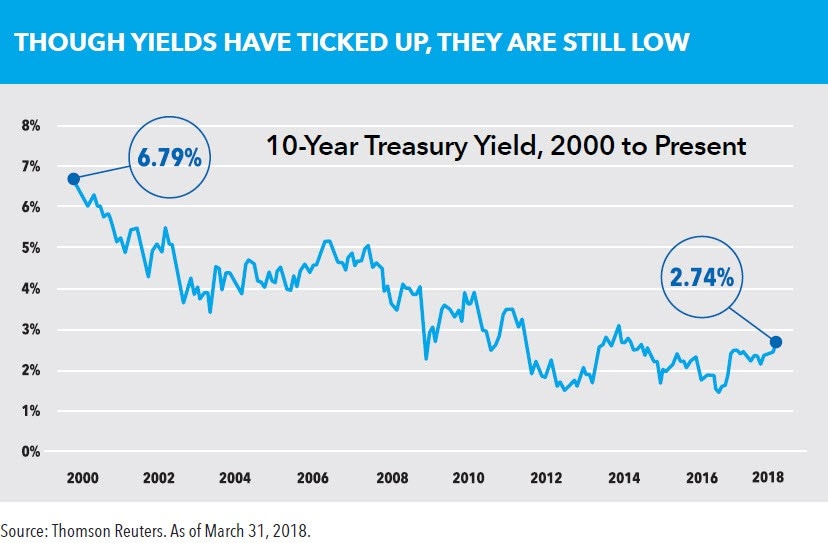 Beyond all of this, the spotlight on yields threatens to obscure the central role that fixed-income plays in a balanced portfolio. Bonds serve four essential functions: diversification from equities, income generation, inflation protection and capital preservation. These are always important, but especially so given the uncertainty in all financial markets following years-long rallies. With greater volatility and uncertainty about the change in direction of developed market central banks, one needs to remain balanced and remember the benefits of holding bonds in a diversified portfolio.

This isn’t to say that the bond market doesn’t face headwinds, starting with shifting monetary policies. Central banks in developed markets are beginning to tighten after years of being enormously accommodative. The Federal Reserve has hiked six times since late 2015. It is expected to do so two more times this year and perhaps twice in 2019. The Fed is also reducing the size of its balance sheet as it unwinds the quantitative easing program it undertook in response to the 2008 financial crisis. Meanwhile, the Bank of England raised rates in November for the first time in nearly a decade, the Bank of Canada has moved three times since last July, and the European Central Bank has committed to reducing asset purchases.

This comes at a moment when valuations in the credit market have risen. The stretch for yield by some investors has caused credit spreads to tighten significantly. As a result, credit is priced somewhere between fair value and full value. And although investment-grade spreads could tighten a bit further, we believe there is a greater likelihood of spread widening. Even if that occurs, however, I don’t expect anything resembling the dramatic widening that occurred in 2008.

Lately, discussion has centered on the possibility that the 10-year Treasury yield could top 3%. Other than briefly scratching 3% in late 2013, the 10-year hasn’t exceeded that level since 2011. But while this topic has generated a lot of hand-wringing, it’s important to point out that 3% is still extremely low by historical standards.

Beware of the danger of credit risk.

The fixation on interest rate risk has overshadowed the threat of credit risk. The low-rate environment prompted managers at some firms to goose returns by plowing into bonds with greater yields but notably higher risks. Those securities could be adversely affected in a market downturn, subjecting investors to outsize losses. Capital Group’s fixed-income team has been mindful not to stretch for yield, as we stick to our knitting of trying to generate predictable and appropriate risk-adjusted returns for our clients.

Given the possibility of higher inflation, our fixed-income team favors Treasury Inflation-Protected Securities, or TIPS, which we believe could benefit if consumer prices rise slightly more than the market expects. Conversely, our exposure to investment-grade corporate bonds is below benchmark given that spreads on these securities have become tight.

The uncertainty that has cropped up in all financial markets this year underscores the importance of holding bonds as a fundamental component of a broad investment portfolio. Fixed-income provides a protective counterweight to stocks and other risky assets. And despite temporary bouts of volatility, bonds have historically generated positive returns through full economic cycles. With stretched valuations, tighter monetary policy and the likelihood of increased volatility, we believe in staying balanced and allowing bonds to do their job in a diversified portfolio. 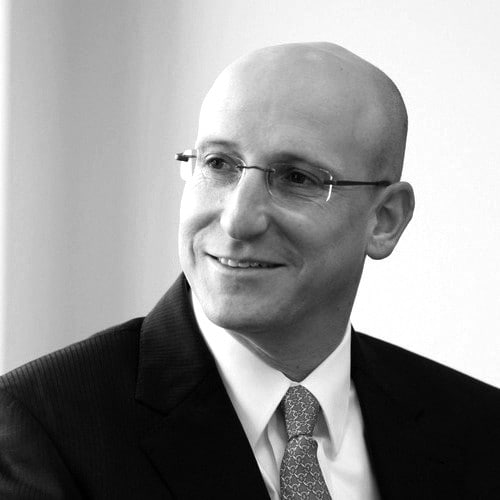 Mike Gitlin oversees Capital Group’s fixed-income team and is a member of the firm’s management committee. Based in Los Angeles, he has 24 years of investment industry experience and has been with Capital Group since 2015.