What is the outlook for the economy?

A lot is going right. Earnings are likely to rise nearly 20% this year thanks to the combination of organic growth and tax cuts. Exports are strong. Growth is synchronized around the globe. All of these positives are showing up in the companies we visit. For example, I was in Pittsburgh and Cleveland recently meeting with industrial coatings companies. These businesses sell to manufacturers in a wide range of industries, so they are good barometers of the economy, and they are very optimistic.

Are you worried about the threat of inflation as wages tick up?

One of the signs of a vibrant economy is that businesses are forced to compete for scarce resources. In this case, the resource is labor and companies are starting to raise wages to attract and retain good employees. Analysts are hearing positive comments from executives across most industries. They’re saying their sales are strong and they’re comfortable sharing some of that with their employees. So even though wages are going up, CEOs are confident that they can pass some of their added costs on to customers. Like most things in life, everything’s good in moderation. Right now we are seeing the upside of growth, with no signs of excess. I believe companies can increase productivity to avoid damaging their earnings or rolling out huge price increases for end customers. But this is something I’m watching closely. What might all of this mean for the stock market? The investment outlook is a bit more uncertain. Let me illustrate it this way. I do a lot of traveling for my job. I was once on a flight and, even though it was a beautiful sunny day, it went through very bad turbulence. I found out later that this is known as clear-air turbulence. It’s bumpiness that occurs in a pristine sky with little warning.

That’s the way the market feels right now. Despite all that’s going right in the economy, hiccups happen, and I worry that market participants aren’t prepared for anything but clear skies. If there is unexpected bad news, they could overreact and push markets to extreme positions. Investors are a bit less complacent than they were before the recent volatility. But I worry that there’s still an unsettlingly high degree of calm.

Given your assessment of the market, how have you positioned the portfolios you manage?

I’m typically fully invested and do not hold a lot of cash. But I have a high-single-digit cash position at the moment and hold fewer stocks than I normally do. Basically, I’m seeking to mitigate the impact of clear-air turbulence, if it occurs.

That said, there are certain areas of the market that I believe are attractive. One example is regional banks. Many areas of the country are experiencing strong growth, which is translating into increased loan demand. Combined with slowly rising interest rates, that’s favorable for some regional banks. Along that same line, there are some opportunities in the consumer discretionary sector. The robust job market is boosting disposable income, meaning these businesses should benefit from increased consumer spending. This won’t be the case for every company, and selectivity is critical. But the analysts have done a great job of identifying well-run franchises with good prospects.

What are your thoughts on technology stocks, especially as valuations have risen during the sector’s lengthy rally?

It’s important to consider valuations,but you have to assess the full picture. You can’t just look at the valuation of the overall market, or of a specific sector, because there is a lot of variation among companies. This may seem counterintuitive, but some high-multiple companies are really attractive because their growth, and the projected duration of that growth, are very strong. Conversely, some companies with very low multiples are not good investments because the outlook for them is not particularly encouraging. Think of it this way: It’s usually not a surprise when a well-thought-of stock turns out to be great; what is surprising, however, is when a stock turns out to be even greater than expected. The magnitude of the greatness is a surprise, with gains that can last over a long period. Of course, this usually isn’t the case. That’s because even very successful companies dominate only a single industry or line of business. They can’t expand beyond their niche. They’re one-trick ponies. By contrast, a handful of today’s technology companies are successfully innovating across multiple areas, from cloud computing to self-driving cars. It’s critical to be extremely selective, but it’s important to identify when a company has significant potential in multiple large markets.. 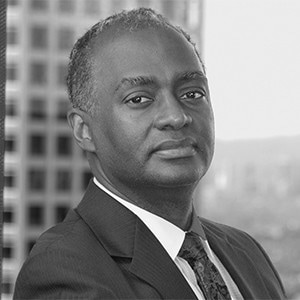 Alan Wilson is a Capital Group equity portfolio manager in the Capital World Investors division, based in our Los Angeles office. In this interview, he assesses the U.S. economy and stock market following the recent pickup in volatility. He also outlines some of the sectors where he is finding opportunities.