Each year, a relative handful of dynamics have an outsize impact on the economy and investment markets. Though some are fleeting, others can have long-lasting effects. With 2018 officially underway, here are two themes that Capital Group analysts believe may be especially noteworthy in coming months.

Despite its futuristic-sounding moniker, artificial intelligence has been around since the 1950s, and may be best known today as the brain behind digital assistants such as Siri and Alexa. Despite that, AI has never quite lived up to expectations, with the technology repeatedly falling short of the hype.

That is rapidly changing thanks to the convergence of sophisticated algorithms, lightning-fast computer speeds and the sheer explosion of data across the digital terrain. As with major technological advances of the past, the maturation of AI is likely  to usher in a wave of innovation that will have a profound impact across the business world.

“We are at an inflection point, in which advances in AI will underpin a technological revolution,” predicts Jared Franz, a Capital Group economist who closely studies the topic.

AI and its close cousins, machine learning and neural networks, refer to computers that are designed to mimic human reasoning and logic. Initially, AI has helped companies boost efficiency by automating mundane tasks. But increasingly, machine learning is enabling in-depth pattern recognition and predictive analysis, with broad applicability in such sectors as health care, finance, transportation and manufacturing. 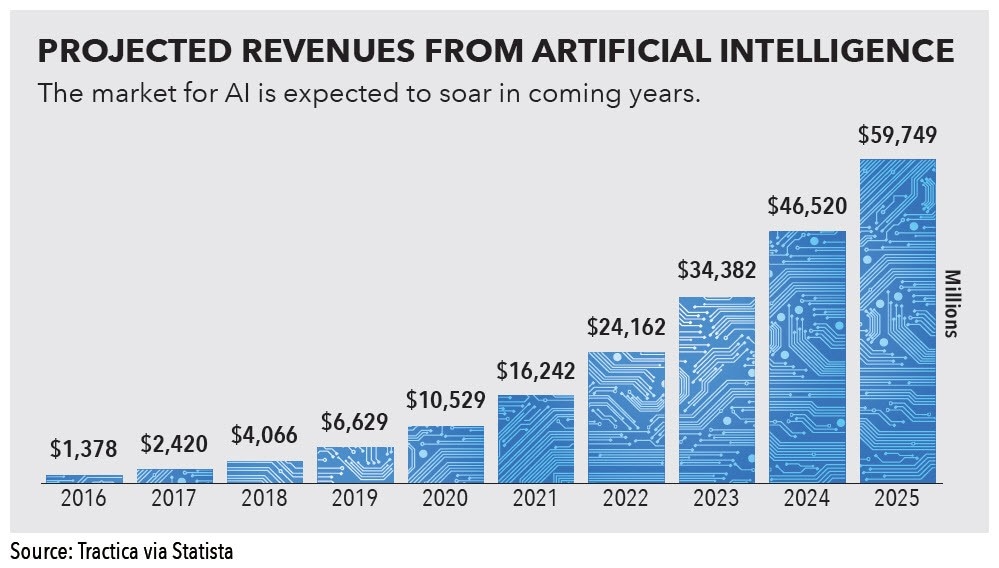 In medicine, for example, computers are becoming able to handle patient intake at hospitals, scan medical records for early detection of health problems and help to design resulting treatment plans. Beyond that, pharmaceutical companies could harness neural networks to identify the most promising areas of research with the greatest odds of clinical success. In finance, AI will help banks reduce loan losses by analyzing credit risks more quickly and effectively. Not surprisingly, big tech companies and a bevy of start-ups are all putting huge resources into AI.

“We’re going to look back on this in 10 years and say, ‘Wow, that was transformative,’” Franz predicts.

Call it the “Amazon effect.” The depth of the threat from e-commerce — primarily from the online colossus — accelerated in 2017, and the strains on traditional brick-and-mortar retailers are likely to become even more acute in the next several years. Even well-known companies with previously unassailable business models have failed to stem market share losses.

Historically, economic growth and surging consumer confidence have cured many ills in the retail industry. But store closures and bankruptcies have spiked, forcing retailers to grapple with the reality that there are simply too many physical stores in the era of online shopping. What began with the shuttering of malls in outlying suburbs is extending to upscale shopping districts in major cities, with once-thriving shops now bearing vacancy signs. It’s a trend that is bound to continue, says Jon Keehn, a Capital Group retail analyst. 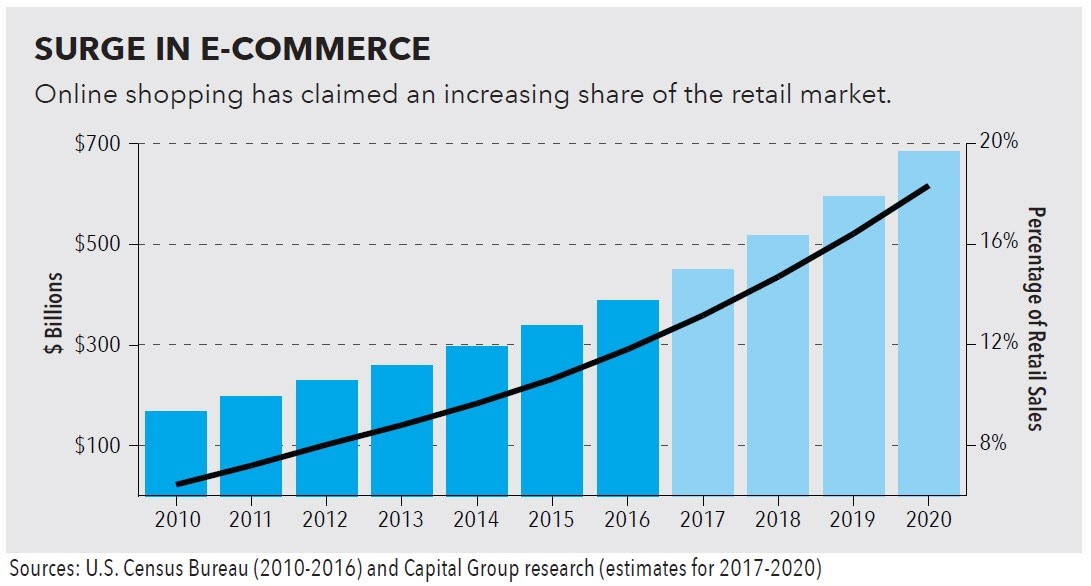 “There is no quick fix,” Keehn observes. “This isn’t a case of simply weeding out a few weak companies. The U.S. has far more retail space per capita than other countries, and it needs to decline meaningfully.”

E-commerce has jumped from roughly 1% of total retail sales in 2000 to about 12% today. Keehn believes that number could top 25% longer term. The plight of traditional retailers could be made worse if they try to buttress their margins through heavy discounting and underinvestment in both stores and online capabilities.

This disruption underscores the need for investment selectivity, not only in retailing but in spillover industries such as property development, banking and transportation. There is long-term potential for online retailers in distinct niches, as well as for traditional retailers making digital headway, Keehn says. But it’s essential to be extremely selective and to avoid businesses that are vulnerable to the online juggernaut.

The above article originally appeared in the Winter 2018 issue of Quarterly Insights magazine.