Why Americans are finally saving again, and why it’s still not enough
April 25, 2017


In 2015, Americans put an average of 6.8% of their salaries into 401(k) and profit-sharing plans. That’s up from 6.2% in 2010, according to an annual survey by the Plan Sponsor Council of America released in December. This much-needed increase reverses the trend of declining savings rates and comes even though employer contributions haven’t budged for the past three years, according to the survey.


Unfortunately, it’s barely a drop in the bucket for the average American worker, who would need to double or triple that amount to have adequate savings.


While the picture looks bleak, there may be hope.


The biggest factor pushing up 401(k) savings has been automatic enrollment programs. These plans report that 89% of workers make contributions, compared with just 75% in plans without auto-enrollment, according to the study.


“There is a big need to save for retirement, and employers have really stepped up with plans that customize and automate savings,” says Hattie Greenan, Director of Research for the Plan Sponsor Council of America. “Getting employers and workers on the same page is essential.”


Almost 60% of plans surveyed by the Plan Sponsor Council of America make their sign-up process automatic, requiring employees to take action only if they don’t want to save. Such a setup allows workers to see the benefits of savings sooner. That provides motivation to continue saving, Greenan says.


“Taking a holistic view to financial wellness is essential — but first, workers have to see the benefit, and that’s what automation provides,” Greenan says. “Once they see it, they are more likely to buy in.”


The increased popularity of target date funds and Roth 401(k) plans have also been a big help to savers. Allocations to these funds rose to almost 20% of assets in 2016 compared with only 4.1% a decade ago, the study showed.


Roth 401(k) accounts, which allow investors to save on an after-tax basis, are now allowed by 60% of plans. Roth accounts allows savers – especially the young or those expecting higher tax rates in the future — to stretch out the time during which their nest egg can grow.


Target date funds — mutual funds that change their asset makeup based on the expected retirement age of investors — have grown in popularity in the past decade, partly because they are often used as qualified default investment options. Investors have been attracted to their ease of use and risk management properties.


A future that still needs saving.

But the grim reality remains that Americans still aren’t saving enough if they want to fund their desired standard of living in their golden years. 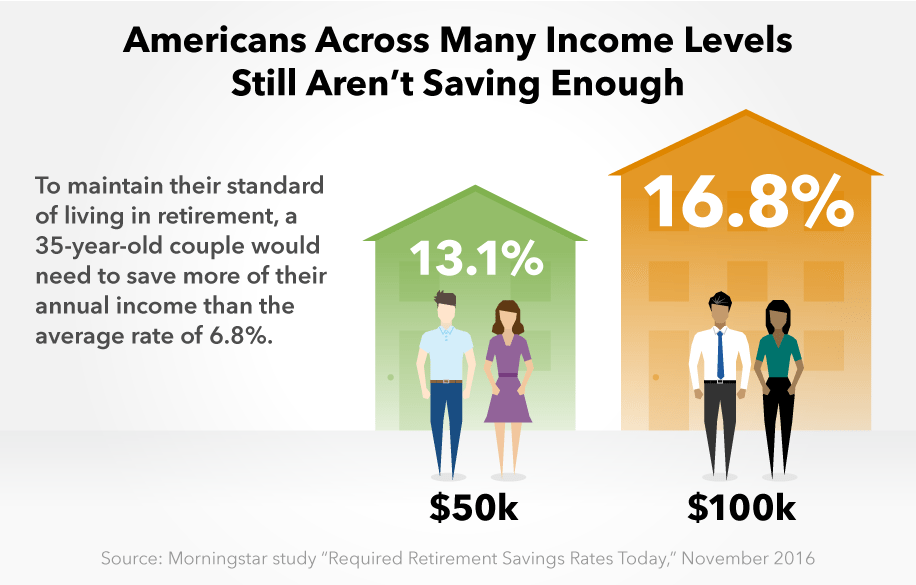 Even though U.S. workers accumulate most of their retirement savings through their jobs, more than one-third of full-time employees don’t even have access to a retirement plan at work, putting their future nest egg in serious jeopardy, according to the Pew Charitable Trust.


More bad news? According to the Consumer Financial Protection Bureau, more people are entering retirement with more debt than ever, especially mortgage debt.

The lesson from the Plan Sponsor Council of America survey is that with a nudge from employers and the right retirement framework, Americans can improve their saving habits. But for many people, it’s going to take a lot of work and big sacrifices. Those could include downsizing homes, planning to have a longer career, investing in marketable skills and delaying Social Security benefits, according to the Center for Retirement Research at Boston College.

When figuring out where to tighten the budget and how, financial advisors can be the best help. Investors who use advisors are more likely to have an investing strategy, according to a Capital Group survey of almost 3,800 investors. They’re also more confident about being on track to achieving their investment goals, and they have a larger percentage of their income invested. This can mean more money in retirement when they need it the most.


In fact, a simulation by Morningstar found that taking advice from a financial planner can boost wealth in retirement by 23%. That added value is based on a combination of factors, such as tax-efficient decisions and liability-relative asset allocation optimization that a financial advisor may provide.


For any investor, that goes a long way to help ensure adequate savings at retirement.