Capital Group’s Portfolio Strategy Group Forum (PSG) takes place three times each year. The two-day event brings together the entire fixed income group from across the globe for an in-depth discussion on the macroeconomic environment and fixed income markets. Our proprietary fundamental research is the foundation of the discussions and any recommendations for our investment professionals that result from these meetings. This is a recap of views that emerged from the recent meeting in late February. 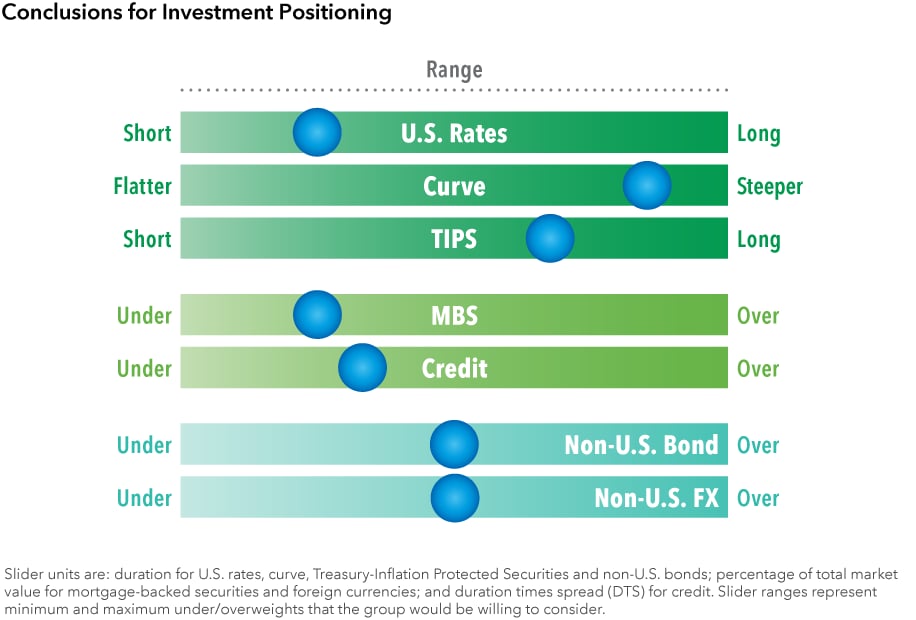 
The economic backdrop looks positive. U.S. growth is expected to be above 2.5% in 2018 with momentum likely through 2019. In Europe, economic expansion is broadening beyond the core economies and should remain around 2% over the next two years. Meanwhile, China should be able to sustain a growth rate above 6% in 2018 but will likely slow next year as the government implements more aggressive economic and credit reforms.


Thus far, the uptick in global growth has left core inflation below central bank targets. However, years of modest but steady growth have begun to push resource utilization rates higher, which should put upward pressure on prices. Recent weakening of the U.S. dollar and rising shelter costs, a major component of the Consumer Price Index, are also lifting inflation.

Although the economic backdrop remains constructive, the extended period of low interest rates has encouraged corporations to increase leverage and investors to reach for yield. The risk for both investment-grade and high-yield credit is asymmetric at this point in the cycle with limited room for spread tightening and high potential for more volatility and spread widening. While default rates in high yield are not expected to rise significantly in the next year, companies will need to begin addressing their debt structures ahead of the next recession. As a result, we favor an underweight position in credit.

Duration positioning is driven by a number of factors, including the current shape of the spot and forward yield curves, our outlook for economic conditions and anticipated central bank policy. While economic growth is improving and central banks are beginning to react, they may not move quickly enough in an environment of persistent cyclical strength. In this scenario, yields are likely to move higher than is anticipated by the forward curve. Thus, core bond portfolios should be modestly short duration, but positioned for a steepening yield curve.

In the last 12 months, there has been a significant flattening of the U.S. yield curve as investors have anticipated continued tightening by the Federal Reserve. As a result, the five-year part of the U.S. yield curve is relatively attractive. While further yield curve flattening could occur, much of this is discounted in the forward markets already. Increasing issuance of U.S. Treasury bonds combined with Fed tightening could also put pressure on longer dated maturities. Thus, managers should position portfolios for yield curve steepening by being long the five-year part of the curve and underweight 10-year and 30-year bonds.