The Fed Raises Rates, With an Eye on Inflation | Capital Group

The Fed Raises Rates, With an Eye on Inflation

A year after the Federal Reserve boosted the key interest rate for the first time in nearly a decade, it has finally raised it again. The move is an indicator of the central bank’s confidence in the health of the U.S. economy. Specifically, it signals that Fed officials believe the labor market and inflation are on the right track.

The market broadly expected the Fed to finally increase rates again, with futures contracts implying more than a 97% chance late last week. This 25-basis-point hike puts the federal funds target rate between 0.50% and 0.75%.

Despite U.S. unemployment hovering at or below 5% for more than a year, the Fed held off on hiking rates for most of 2016 as low energy prices paired with global risks to keep inflation contained. But inflation expectations have picked up significantly in recent months, and global geopolitical conditions seem to be improving on the margin.

Inflation Expectations Have Been Approaching the Fed’s Target Level 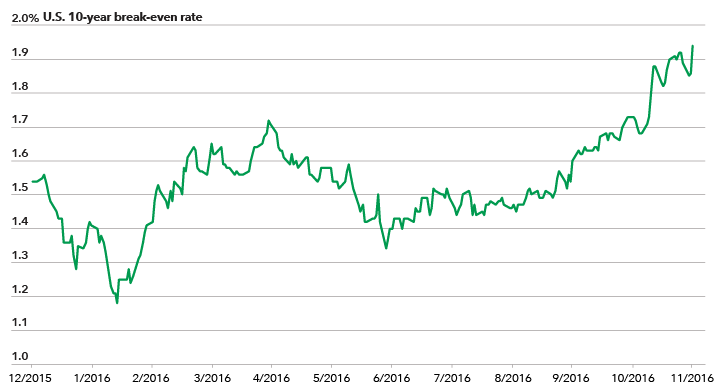 Source: Federal Reserve Bank of St. Louis. As of 11/30/2016.
The break-even rate is the minimum rate that the Consumer Price Index must average over a specified period before Treasury Inflation-Linked Securities outpace Treasuries with similar unlinked securities.

While the economy certainly seems stronger than it did early this year, gross domestic product growth remains sluggish, with 2016 GDP growth estimated to barely break 2%, based on the Atlanta Fed’s fourth-quarter projection. Higher mortgage interest rates may also be dampening the progress we’ve recently seen in U.S. housing market activity. Moreover, while some analysts see the proposed policies of President-elect Donald Trump as pro-growth it remains unclear which of them will succeed in Washington and become regulations or legislative acts.

While the rate hike might have been largely anticipated, that didn’t make the Fed’s subsequent communication any less interesting. Observers were eager to hear what the central bankers had to say about policy going forward. In particular, they were anticipating whether Chair Janet Yellen would provide any hints in her post-meeting press conference.

Arguably the most significant information provided by the Federal Open Market Committee this week was contained in its so-called “dot plot,” which shows members’ interest rate expectations. The dots moved up by about 25 basis points, indicating three interest rate hikes in 2017. After the Fed’s September meeting, only two hikes were projected.

Yellen’s press conference provided a few clues. Most notably, she appeared to walk back comments she had made in October that implied that the Fed might be willing to let the economy “run hot” for a period of time to boost inflation expectations.

Yellen’s comments also implied that there’s still a great deal of economic uncertainty to consider. The Fed appears to have a wait-and-see attitude toward how President-elect Trump’s policies may actually pan out. Last week, New York Fed President William C. Dudley gave a speech suggesting that if Washington provides significant fiscal stimulus in the form of tax cuts and infrastructure spending, that could be a reason to move policy rates higher.

“We’ll be looking carefully to understand what tax cuts, regulatory relief and infrastructure spending Washington provides,” Hoag explains. “In particular, whether these policies are likely to expand productivity or just boost the price level, which may in turn influence the Fed’s monetary policy.”

While the Fed is likely to tighten monetary policy gradually next year, the path it might take in 2018 is less clear. At that time, President Trump will have the opportunity to nominate a new chair and vice chair of the Federal Reserve, as well as several governors. That could mean a shift in policy at the central bank. Markets will begin to better understand the new president’s strategy on the Fed when he nominates his first two Fed governors in 2017 – if he’s specifically targeting nominees who seek to raise rates more rapidly, that could shake things up.

Interest rates are likely to drift higher over the next several years, unless the economy suddenly begins to contract. The main question remains how quickly that will occur and by what magnitude. While the expectation of higher rates have pushed bond prices lower, they will also provide an opportunity for investors to reinvest at higher yields.