“Putting 2020 into historical context gives a sense of just how bad the decline in aviation volume demand was: Global air travel fell 65% in 2020. Before last year, the worst decline in history was 3% and that had occurred only three times.”1

Nevertheless, despite the magnitude of events, there are several reasons why some sectors within aviation, such as aircraft manufacturing, may be more resilient than they have been in the past.

Aviation has been a fairly stable secular growth industry over the past four decades and the declines seen in 2020 were 20 times worse than the previous worst year in history1. Given the extraordinary fall in air traffic, it’s obvious why it was such a painful year for stocks in this industry. 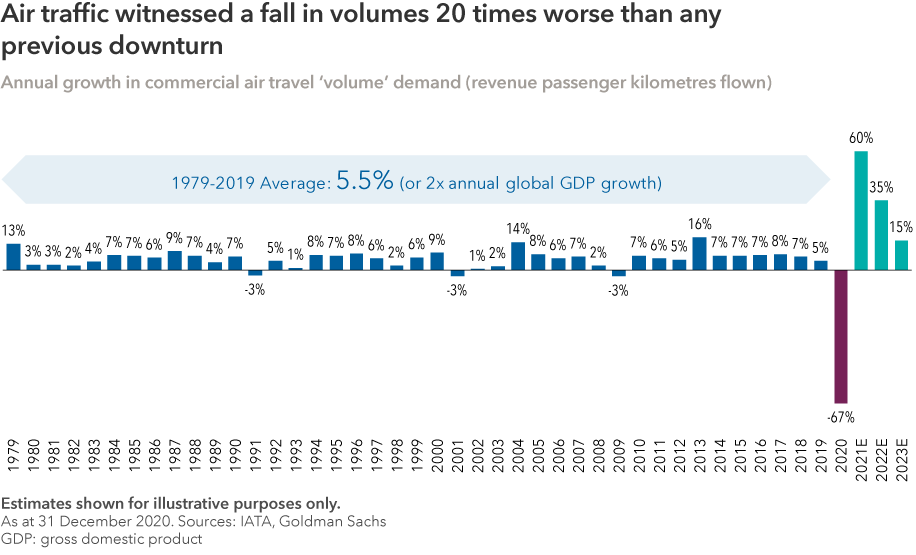 However, what is interesting about the sharp fall in air traffic is that we didn’t see aircraft production fall to the same extent. This is especially striking given the cyclical nature of the industry, historically.

Even before the COVID-19 crisis emerged, Todd had been advocating the view that the aerospace industry is structurally different from the past. The chart below shows the cyclicality of aircraft production rates historically; rising significantly then falling significantly. And, despite the large declines in production rates in 2020 due to COVID-19, his view is that 2020 actually illustrated how structurally different the industry is compared with in previous downturns. 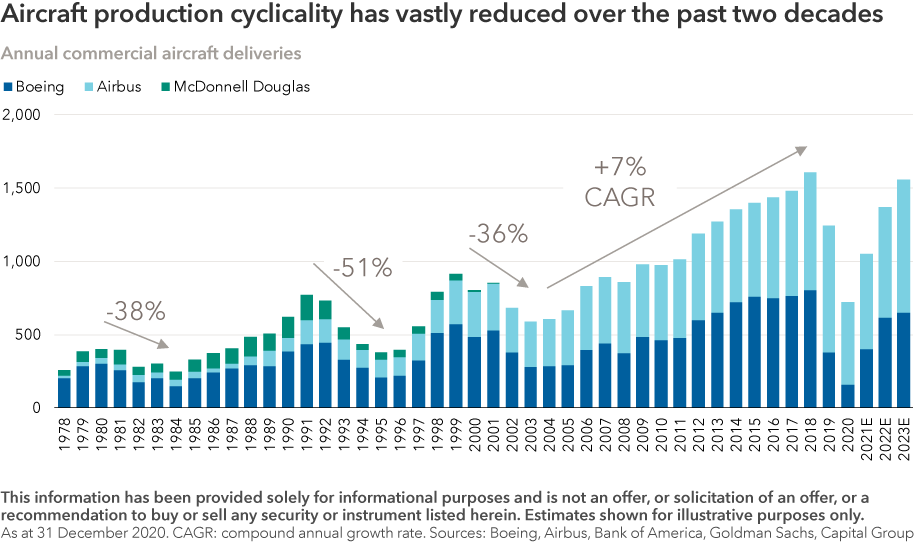 Demand for aircraft is much more diversified today.

• Growth and replacement demand: Historically, most aircraft deliveries were a response to industry growth. Today, it is more evenly split, with about 60% of new planes accounting for fleet growth and 40% for replacement of older planes.2 An important characteristic of replacement demand is that it is less cyclical than growth demand.
• Geographic demand: Previously, the industry was much more dependent on the fate of airlines in the US and to some extent in Europe, but today it’s a global industry. It is therefore less dependent on any one region, which also adds stability that wasn’t there in previous years.

Aircraft manufacturing is essentially a global duopoly between Airbus and Boeing. Before the crisis, the long-term structural demand for their products meant backlogs on their order books were much larger than they had been in the past. While there has been a considerable number of unfilled orders for Boeing and Airbus because some airlines didn’t take deliveries due to the impact of COVID-19, looking at the bigger picture there are still huge backlogs and great demand for aircraft. The size and robustness of the order books brings stability and visibility to revenues from original equipment manufacturers (OEMs).

Another difference today compared with 20-30 years ago is that production is now planned more cautiously. Previously, production rates would increase very quickly in response to orders. Over the past decade, Boeing and Airbus have both been disciplined about raising production rates gradually to avoid periods of significant oversupply, which helps reduce cyclicality.

The industry is currently in a period of less development compared to the past. Both Boeing and Airbus have spent billions of dollars over the past 10-15 years developing new aircraft. Development projects are expensive and contain a level of risk. But development cycles are also long, so if there were plans to launch new models before 2030, development work would already be underway. While there will likely be tweaks to current aeroplane models, such as adding functionality, Todd doesn’t think there will be any clean sheet development programmes in the near-to-medium term, certainly for Airbus. Boeing is arguably in greater need to build a new aircraft shorter term, but whether it does or not will depend on how the company responds to the challenge it faces with its 737 MAX aircraft3. Nevertheless, over the next 10 years the number of development projects will be much lower than in the past, which helps companies’ margins and returns.

An appetite for new-generation aircraft has kept order cancellations relatively low. When compared to the past two decades, 2020 doesn’t stand out as a particularly bad year in terms of order cancellations, despite the level of uncertainty. Cancellations were a little over 1,500 globally last year, representing about 10% of the total order book backlog.4  And most of those were for Boeing aircraft (Airbus cancellations were minimal) and were likely caused by the 737 MAX safety issues. 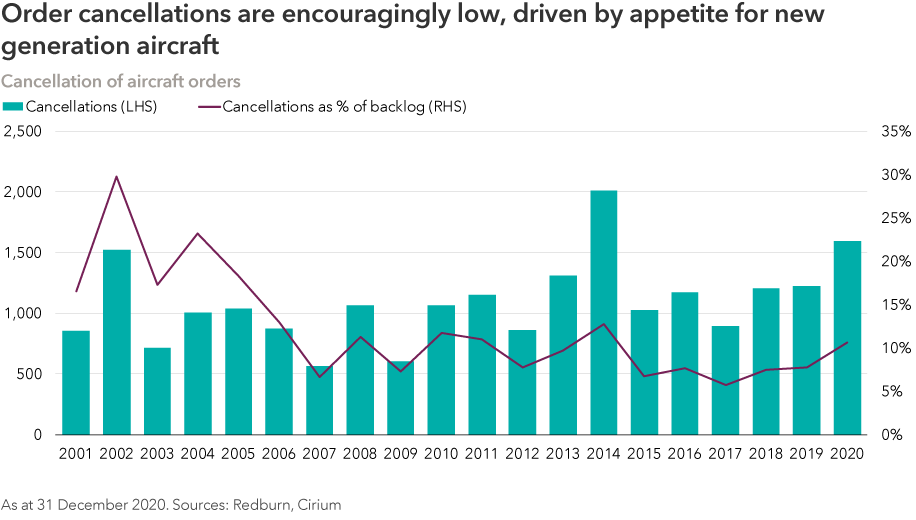 Fuel costs will differ depending on the airline, but these efficiency gains have a significant impact on airlines’ margins. If we use an approximation for the industry that fuel accounts for 22% of an airline’s costs and operating profit margins are 5%; assuming all other costs are constant, reducing fuel costs by 15% means that airlines’ profit margins improve from 5% to 8%. This is a 60% increase – just by replacing older planes with newer, more fuel-efficient models.5 So even if airlines didn’t want to take new planes on to expand their fleets, it still makes economic sense to replace older aircraft. 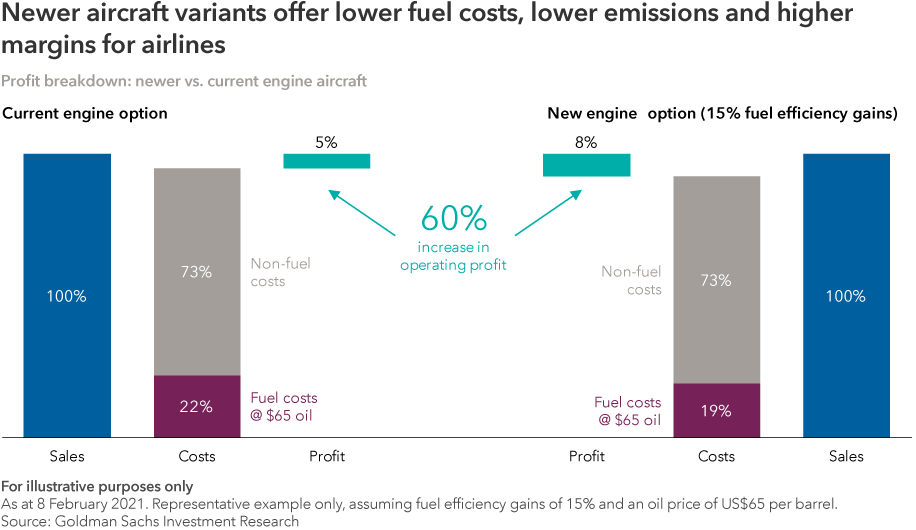 The changing economics of demand and development cycles has had a considerable impact on the aviation industry. While 2020 was a painful year given the sharp fall in air traffic, in Todd’s view the long-term set-up for the sector still looks attractive.

3. Production of Boeing’s 737 MAX aircraft was reduced after the US Federal Aviation Administration (FAA) grounded the aircraft in March 2019, pending a safety investigation.

5. As at 8 February 2021. Representative example only, assuming fuel efficiency gains of 15% and an oil price of US$65 per barrel. Source: Goldman Sachs Investment Research Semiconductors could be the new oil – here’s why
Featuring: Matthews Cherian & Shailesh Jaitly
Beyond Tesla: Electric cars shift into the fast lane
Featuring:
The world in 2030: Investing for the next decade
Featuring: Martin Romo & Jody Jonsson
Closex