Where’s All the Volatility in Tech Stocks?

Where’s All the Volatility in Tech Stocks?

Technology stocks have long been thought of as high beta, or more prone to sharp price swings than, say, a consumer staples or utilities company. Not so much anymore: Technology stocks are currently among the least volatile in the S&P 500 and are experiencing an influx of broad-based buying by a cross-section of investors. Growth funds, hedge funds, momentum strategies and multi-asset strategies have been drawn to technology stocks for their higher growth rates, visibility of earnings, strong balance sheets and dominance in their industries.

There’s no doubt market volatility has declined broadly as stocks have climbed steadily for the past 17 months, supported by central bank-induced liquidity, an improving global economy and earnings growth. But this can reverse quickly in a market correction.

So why is volatility so low now? Here, portfolio managers and analysts at Capital Group weigh in: 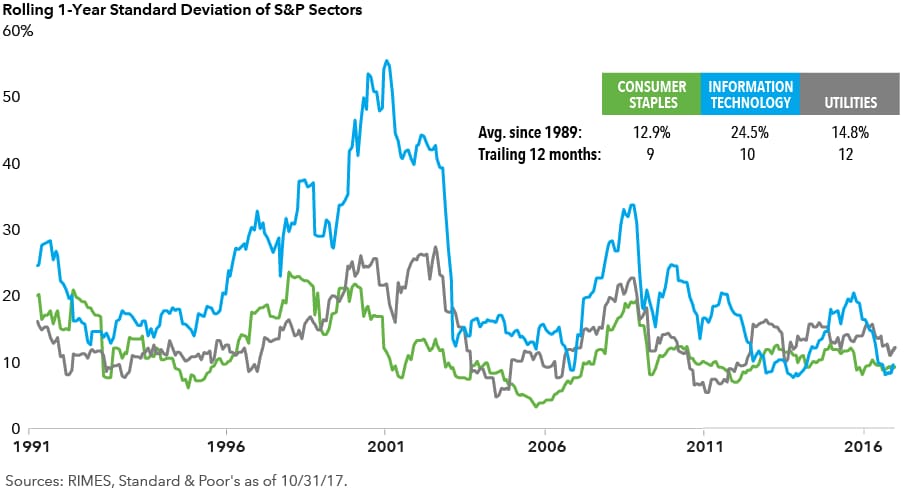 Technology companies have been known for their innovations and for the lofty expectations placed on them, making the sector traditionally one of the most volatile on the stock market. Now, in a sign of the sector’s maturation, tech shares are trading like defensive consumer staples and utilities — the least volatile sectors going back to 1989. Furthermore, their products have become more of a utilitarian-like service than a discretionary item.

“There is so much comfort around the dominance of the large technology companies that there is a sense these companies are becoming the new consumer staples, given the consistency of their businesses and how ingrained their products are in our daily lives,” says investment analyst Irfan Furniturewala, who covers U.S. hardware and semiconductor companies at Capital Group. “A 22-year-old who has just started work would rather pay up for a high-speed internet connection and a smartphone as opposed to leasing a car. It’s one of the reasons why I see Netflix and Amazon Prime as compelling value propositions.”

Tech Stocks Positive 18 of Past 22 Years 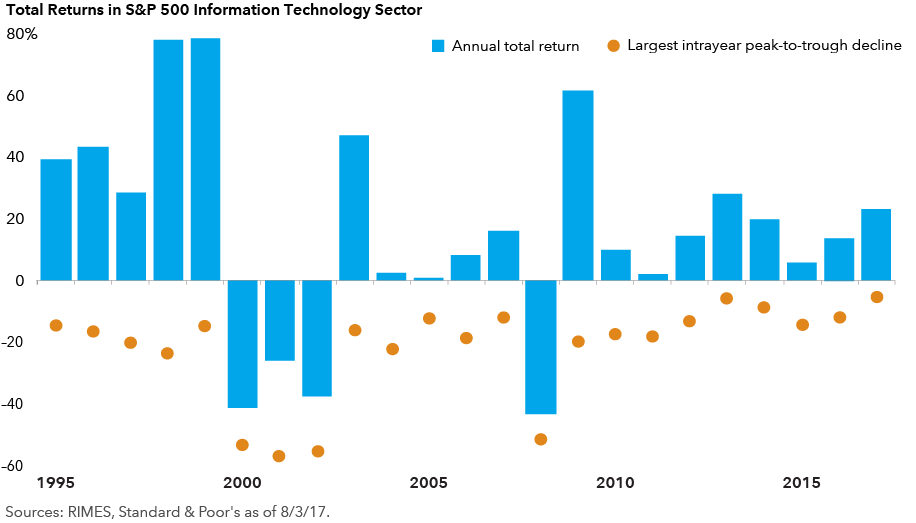 Nevertheless, technology stocks can swing from gains to losses during the course of a year. Given the potential for above-average growth compared to other industry sectors, investor expectations can run high. This means quarterly earnings reports are closely watched, making any slip-ups costly in terms of resulting stock prices.

For investors prepared to handle short-term selloffs, taking a long-term approach has had its benefits.

In 18 of the past 22 years, technology stocks have risen. Put another way, even when the S&P 500 Information Technology sector declined by double-digits within a given year, it managed to finish that calendar year in positive territory 80% of the time.

“Investor sentiment can fluctuate, and these large U.S. technology companies will likely be subject to short-term noise that will affect their share prices. But for the most part, I believe Amazon, Alphabet and Facebook continue to have very long runways for growth,” says investment analyst Mark Casey, who covers U.S. internet companies at Capital Group. “I know it’s not common for companies with market caps as big as these to grow at healthy rates and to keep amassing market cap. That said, it’s also not common for companies to have user bases well in excess of one billion per month. Google has several products with over a billion users, while Facebook has three. Furthermore, it’s also not common for companies to succeed on a global basis so quickly nor to have so many ways to make money.” 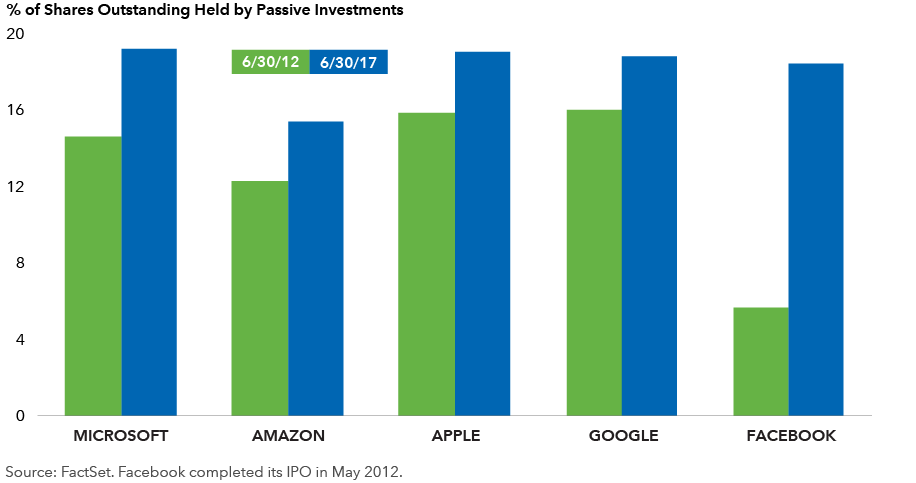 Mega-cap tech stocks are being added to more and more passive index products that have very different investment objectives. Apple, Alphabet and Microsoft are currently held in a number of low-volatility and momentum offerings, according to a recent Wall Street Journal article.

Another key change from a few years ago is the low dispersion of returns among big technology stocks.

The share price movements of Facebook, Amazon and Alphabet have become highly correlated over the last 52 weeks, according to Capital Group research. This trading pattern has emerged even though each company has different business fundamentals and operates in different segments of the technology industry.

“Historically, company share prices would move on company-specific news. Now, at certain times, it seems as if technology companies are being bought or sold together based on a particular group characteristic rather than on individual company fundamentals. Part of the reason is the ownership of technology by sector funds, momentum funds and quantitative strategies,” says Larry Solomon, a portfolio manager at Capital Group.

“In this current environment,” Solomon adds, “I’m seeking to mitigate downside risk through rigorous company-by-company analysis and identifying those sell candidates where I have less conviction in my original investment thesis or where the stock has reached my price target. This approach will give me more flexibility if the market turn lowers. As this bull market runs its course, being very disciplined about which stocks we continue to hold becomes ever more important.”

Navigating a new landscape for dividends
Featuring:
5 Questions About Investing in the Second Half of 2017
By: Capital Ideas Editorial Team
Tech Is Hijacking the Stock Market — Here Are 3 Reasons Why That’s OK
By: Will Craig