You’re not alone. Consider this: Back in October, 150 restless passengers boarded a flight to nowhere — a seven-hour round-trip originating and ending in Sydney, Australia— just to experience air travel again. Late last autumn some cruise lines in Europe and Asia scheduled similar short trips to nowhere, just to get out on the water.

“I think the quick introduction of vaccines is a major game changer, even with all the growing pains we are seeing in terms of distribution,” says equity portfolio manager Lisa Thompson. “A travel recovery is coming, and I think it can happen relatively quickly. Everybody is eager to go on a holiday or to just get out and do stuff. The question is whether the recovery has legs. I think we will have to see how the vaccine rollout evolves, among other things.”

Ready, willing — and able — to spend

Indeed, cabin fever appears to have taken hold of consumers everywhere. There are signs that people are prepared to act: savings rates in the U.S. have soared since the start of the pandemic, and though they have slowed a bit in recent months remain relatively high.

“Once there’s an all-clear, I expect the desire to travel plus the ability for many consumers to spend means we could see a powerful recovery, even if it takes a few years,” adds Thompson, who has spent more than 30 years as a professional investor.

“This crisis is much different than the global financial crisis in 2008 or any of the other crises I’ve seen in my career. Today, looser fiscal policy, looser monetary policy, a very strong banking system and the high personal savings rates could help drive a very sharp pickup in demand.”

These conditions not only can benefit the travel and leisure industries but also the broader economy. To be sure, there will probably be hiccups along the way, and some areas will likely recover more quickly than others.

Cruise ships became the epicenter of the COVID crisis in February 2020, when 3,700 people were quarantined aboard the Diamond Princess after a shipboard outbreak. At the time, the ship accounted for half of all known cases outside mainland China.

“This industry has gotten so much negative media, yet people are still booking cruises for later this year at prices higher than they were in 2019,” says equity analyst Todd Saligman, who covers cruise lines and U.S. and European airlines. “That’s pretty indicative of the demand. There is a loyalty and enthusiasm among cruisers that people who don’t cruise may fail to appreciate, and that loyalty has persisted through the crisis.”

In fact, more than 70% of respondents to an industry survey said they will cruise again. 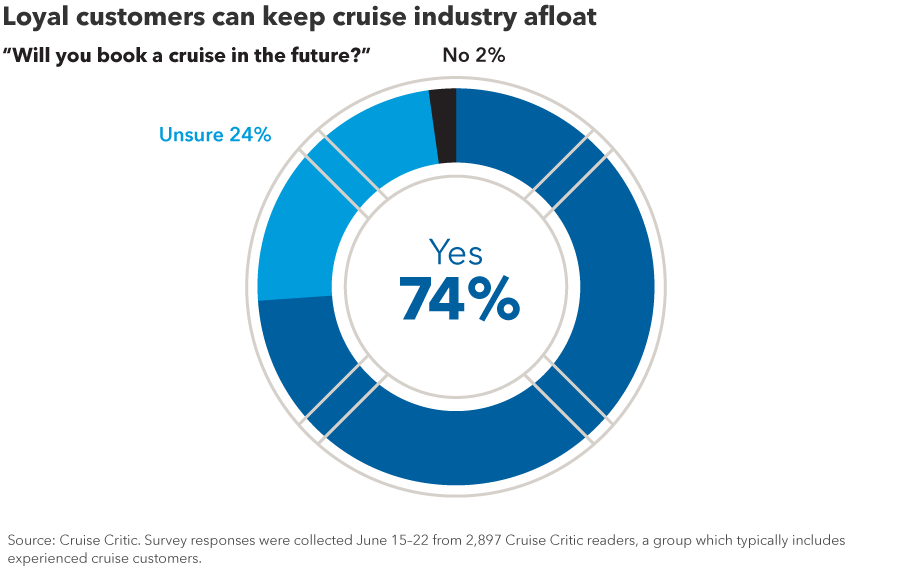 “It’s not clear when the ships will set sail again, but I believe they will be cruising near full utilization quicker than many people expect,” Saligman says.

Although cruise stocks have rebounded from their March lows, Saligman believes select cruise lines continue to represent an opportunity for long-term investors.

What’s more, with intense focus on healthy sailing practices, “There’s a case to be made that they could one day be considered among the cleanest places on earth to go on holiday,” says equity portfolio manager Chris Buchbinder.

Holiday plans up in the air

As was the case in the cruise industry, global air travel was down an estimated 66% in 2020, about 20 times worse than the previous record. Within the U.S., which is more dependent on business travel, the devastation was worse: Air travel declined as much as 95% in the early months of the crisis.

The rollout of the vaccines and prior experience gives Saligman confidence that demand will bounce back. “I believe it will happen quickly as the vaccine rolls out,” he says. “We also saw this after the September 11 attacks. A lot of people thought consumers would never fly again, and traffic recovered quickly.”

Indeed, in China, where the virus is largely under control and the economy has rebounded, domestic air travel has nearly returned to pre-COVID levels. 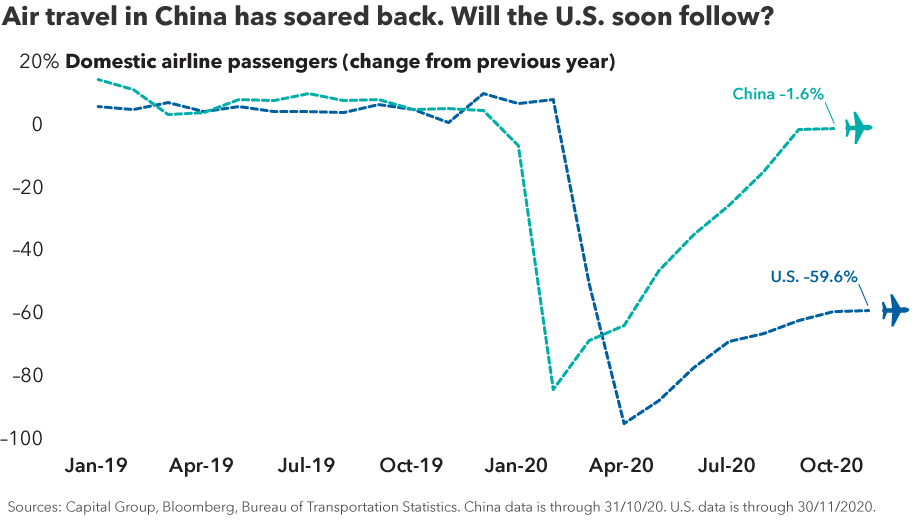 A revival in travel demand can also have a powerful ripple effect, creating the need for a range of goods and services and helping drive job growth across a variety of industries. Among these are aircraft manufacturers, jet engine makers, hotels, casinos and restaurants — all of which were devastated by the pandemic.

Consider aircraft engine makers, which operate a recurring revenue business model. Companies like Safran and General Electric build the engines and sell them at a modest profit, but the engines must be serviced regularly, and the engine makers can generate a great deal of revenue from the service contracts.

“They're not making any money this year, because airplanes are grounded, but as air travel resumes, those manufacturers will potentially see their cash flows rebound,” Buchbinder says.

Unlike other sectors of the economy during COVID, aircraft engine makers are not going to see digital disruption upend their business. “After all,” Buchbinder adds, “there are no digital aircraft engines.”

Markets often anticipate recoveries in the underlying economy, so it’s important to recognize underlying trends early. Consider the global financial crisis, a period when the housing and automobile industries were severely beaten down. By 2012 it became clear that demand was building, thanks to changing demographics and an ageing auto fleet. In both industries, a full recovery took several more years, but a rebound in auto- and housing-related stocks anticipated the recovery in demand and earnings. From February 2009 to December 2010, US auto sales fell 6% while auto stock returns advanced 496%. 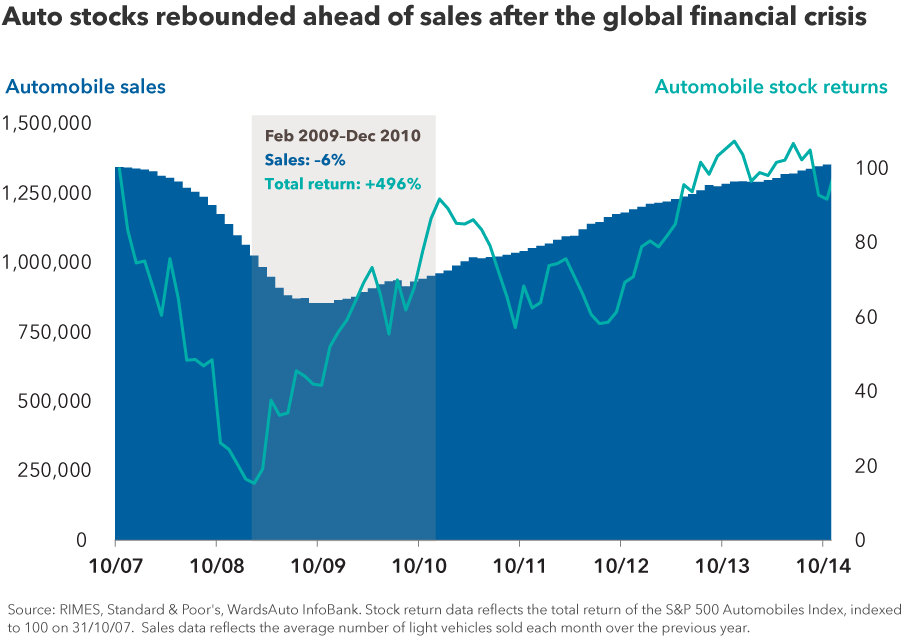 “The market often runs ahead of the actual recovery in earnings,” he says. “I think a year from now we will be in a very different environment where demand and earnings for some of these companies will begin to recover in a more meaningful and sustained way. Our job as investors is to identify those companies that stand to benefit most from the changing environment.” 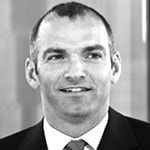 Chris is an equity portfolio manager with 23 years of investment experience. He holds bachelor's degrees in economics and international relations from Brown University. 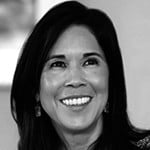 Lisa is an equity portfolio manager with 30 years of investment experience. She holds a bachelor’s degree in mathematics from the University of Pennsylvania and is a CFA charterholder.