Several drug developers brought COVID-19 vaccines from initial trials to people’s arms in less than a year. This lightning quick pace defied the expectations of health care professionals and saved countless lives. It was far faster than the development of any similar drug.

Bringing a vaccine to patients is a complex process typically measured in years or decades. Consider this: It took nearly 50 years of research and trials before Dr. Jonas Salk’s polio vaccine was introduced in 1955. More recently, vaccines for chickenpox and Ebola were each developed in about 42 years.

“It’s no exaggeration to call these COVID-19 vaccines one of the greatest scientific accomplishments in our lifetimes,” says health care analyst Laura Nelson Carney, who covers pharmaceutical and biotechnology companies in Europe and Asia and holds a doctorate in neuroscience. “What’s more, global manufacturing capacity is also larger than we would have thought possible a year ago: Thirteen billion doses of vaccine will be made this year.”

In an age marked by global competition and rivalry, this historic achievement represented remarkable worldwide cooperation. Consider, for example, the vaccine introduced jointly by Pfizer and BioNTech, the first to receive U.S. approval for use.

“It was developed by a Turkish couple leading a German company partnered with a U.S. multinational led by a Greek immigrant with a Scandinavian chief scientific officer,” notes equity portfolio manager Richmond Wolf. “That is a great affirmation of the global nature of innovation today.”

January 5, 2020 — Zhang Yongzhen, a Chinese virologist in Shanghai, and his team complete a mapping of the virus’s genome after 40 hours of around-the-clock work. When the human genome was first sequenced about two decades ago, it took a team of researchers at the NIH some 15 years at a cost of more than $2.7 billion.

January 11, 2020 — Edward Holmes, a professor at the University of Sydney, places a call to Zhang while he is sitting on a runway in a Shanghai airport. Holmes asks for permission to publicly release the virus’s genome sequencing. Just before taking off, Zhang agrees, and Holmes publishes the sequencing on Virological.org.

January 21, 2020 — The Moderna vaccine was shipped to the NIH for the beginning of its Phase I clinical trial.

November 9, 2020 — The Pfizer-BioNTech vaccine is shown to be 94% effective against the virus.

Mid-December, 2020 — The US Food and Drug Administration (FDA) issues emergency use authorization (EUA) for the Pfizer vaccine, and a week later, the Moderna vaccine.

For scientists and companies alike, the obvious question is whether this breakneck pace can be repeated. While we may not see the same level of government spending on drug development as on COVID-19 vaccines, the speed of science has taken a great leap forward.

Advances in genetic analysis and the development of the world’s first mRNA vaccines are leading the way to a new era in medicine, says Wolf. These actions have the potential to be most disruptive in the area of immuno-oncology, or the treatment of various types of cancer.

”We can sequence tumors, compare their mutations to the map of the human genome and identify and match therapies to specific mutations,” Wolf says. Indeed, therapies derived from genetic testing have the potential to extend lives and generate billions of dollars in revenue for the companies that successfully develop them. 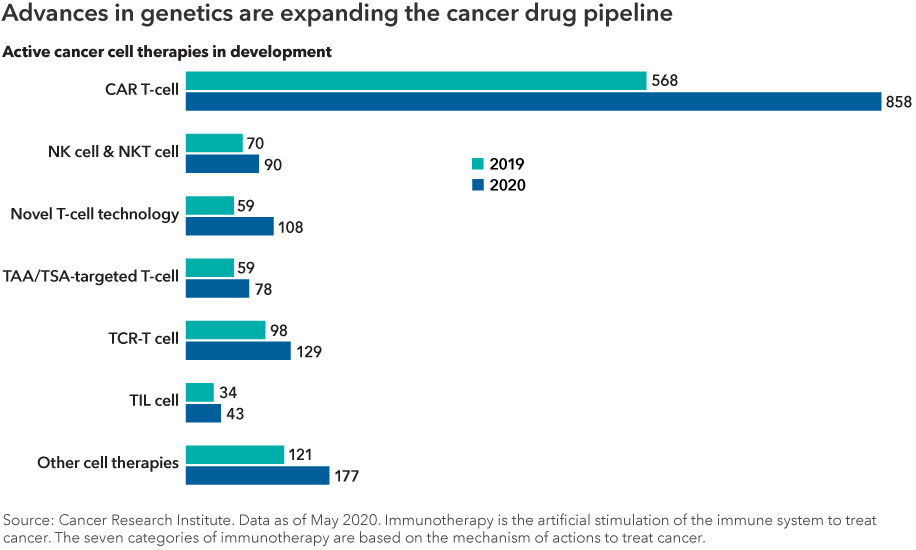 The U.S. and Europe are not the only significant contributors to drug discovery. Chinese biotech company BeiGene recently got the first FDA approval for a blood cancer drug called Brukinsa, says Nelson Carney. Another company, HUTCHMED, will likely get an approval this year for its treatment targeting neuroendocrine tumors.

The role that China plays in the global pharma industry, both as an end-user market and as a source of globally relevant innovation, is only going to increase in the future.

2. The markets are potentially huge

For some types of cancer and other common ailments, the potential addressable market size can be enormous. “The first Chinese PD-1 inhibitor — the same category as Merck’s drug Keytruda — filed for approval in the U.S. only a few weeks ago,” says Nelson Carney. “This is potentially a $50 billion market. The consensus peak sales for Merck’s drug are between $25 billion and $30 billion for just this drug. The patent doesn’t expire until 2028, but there are four other companies hot on its heels, also planning to file in the U.S.”

If the 2010s were the era for technology titans (including the FAANGs) to lead markets and change the world, then the 2020s may well be the era when health care takes the lead. “There’s never been a more exciting time,” Wolf states. “It started with the sequencing of the human genome. We've developed and improved these tools over the last two decades, and now we’re using them not only to provide more accurate diagnostics, but to actually develop better therapies and to match therapies to those diagnostics.” Laura is an equity investment analyst with seven years of industry experience as of December 31, 2019. She holds a PhD in neurosciences from Imperial College London and a bachelor's degree in human biology from Stanford University. 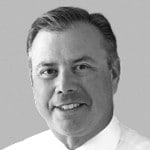 Rich is an equity portfolio manager with 24 years of investment experience. He also has equity investment analyst responsibilities covering U.S. medical technology companies and REITs. He holds a PhD from the California Institute of Technology and a bachelor's degree from Princeton University.