2020 was a rather eventful year for Japan following a series of headline-grabbing events, including COVID-19, a delay of the Tokyo Summer Olympics and a surprise change in leadership in September. Yoshihide Suga’s succession of his ally Shinzo Abe as prime minister, in particular, has provided investors plenty to think about in terms of what Suga’s leadership could mean for Japanese stocks heading into the new year.

Japan has been one of the few countries globally that has been relatively successful at containing the coronavirus outbreak, especially when compared with other G7 countries and European nations. This is one of the reasons why Japanese equities have been resilient in 2020, with the TOPIX up by 2.6% over the year as a whole.1

Heading into 2021, there are several other factors that paint a positive outlook for Japanese equities.

First is the political stability Japan offers. While the prime minister has changed, in reality he represents a mere continuation of the previous regime. Suga was chief cabinet secretary under Abe, and has pledged to follow his predecessor’s policies.

A second reason why the outlook is positive is the relative security of Japanese dividends. The situation with dividends in Japan is different to what is happening in other parts of the global economy. Even for banks, the dividend outlook is quite stable. The level of government intervention seen in the UK and Europe has not occurred in Japan. In fact, the government is supportive of banks continuing to pay dividends, and even increasing them.

One of Suga’s key focuses ever since he took office has been digitisation.

Even before the pandemic, Japan was significantly underinvested and lagging the world in terms of digitisation, whether that was government, large companies or smaller businesses. This became very apparent to the public when the coronavirus pandemic hit.

In response to the COVID-19 crisis, the proportion of Japanese people working from home rose to only 18%2 , significantly lower than both the UK and the US. 3 Cloud penetration is also relatively low in Japan, at 15%, compared with 25% in the UK and 40% in the US. Another issue is that Japanese IT systems are too complex, labour-intensive and lack standardisation. In fact, there was an embarrassing incident on the Tokyo Stock Exchange recently when trading was halted for a full day due to a technical glitch.

Collectively, this means there is a lot of scope to improve, and if the situation is left untended, Japan could become increasingly irrelevant within the global economy. Suga has a real sense of urgency in doing something about this and has made it a priority in his reforms. This potentially opens the door to a wide range of opportunities, which will be across both government and the private sector. It is also likely to bring major changes in areas such as the approach to business processes, consumer habits and entertainment. 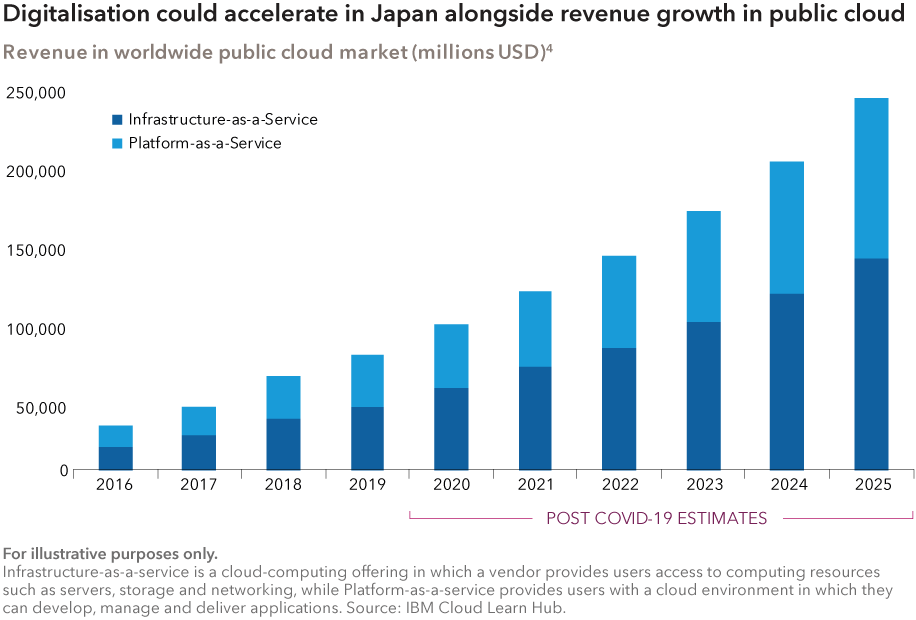 As we enter 2021, we’ve identified four key lessons from the past year that may be critical in uncovering investment opportunities within the Japanese stock market in a post-COVID environment:

1. This type of crisis has revealed the real variance in competitiveness and resilience between different countries, companies and perhaps individuals. Companies that tend to shine in this kind of environment are flexible, agile and have a strong culture. It is like flying kites: when the conditions are good, it lifts all kites. Once the wind drops, it takes more skill and a stronger design to maintain flight; the weaker ones will fall to the ground. So, under more challenging economic conditions, a company’s strength and its ability to adapt to change become paramount.

2. This pandemic has also revealed that some businesses are more valuable than previously thought. Companies in sectors such as health care, hygiene, information technology, logistics, education, food, and the environment have seen their market value hold up well throughout the crisis. Once we become aware just how essential a business is, we realise it can be worth more than we previously thought.

3. Japanese households are already known for their high propensity to save. The experience of COVID-19 is likely to cement this habit. Longer life expectancy – Japanese have among the longest lifespans in the world – provides another incentive to increase savings. One area of caution is if this trend spreads to other economies. For example, the attitude to debt is quite different in the US, where companies often increase debt to finance share buybacks. I think this will moderate as companies become more cautious and try to strengthen their balance sheets; but if it goes too far and they become overly conservative it could impede the pace of a global economic recovery.

4. Finally, greater importance will be attached to environmental change following the pandemic. This is a key, long-term mega-trend and it should be the centre of any investor’s decision-making process. I think COVID-19 is likely to accelerate this trend, as both are large-scale crises shared by humanity. Akira is an equity portfolio manager at Capital Group. Akira has 26 years of investment experience and has been with Capital Group for 19 years. Akira is based in Geneva.

A look into the future of investing in Asia
Featuring: Julie Dickson
The necessity of luxury: What makes this industry so resilient?
Featuring: Frank Beaudry
Mid-year Outlook: The silver lining in Japanese equities
Featuring: Capital Ideas Editorial Team
Closex